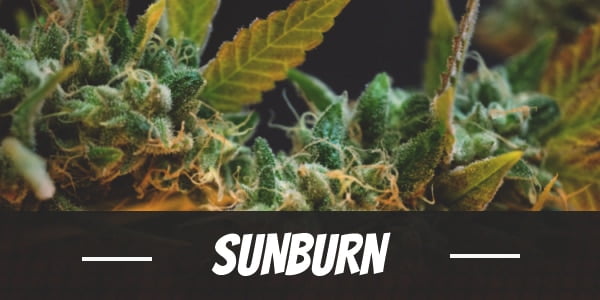 Staying under the scorching heat in the middle of nowhere. Freezing during the harsh winter season. Both circumstances are not inspiring at all. In fact, getting a sunburn on an island is so much more preferable. Imagine walking on the shore and letting the sun, wind and water sooth the mind and the soul.

In many ways, that is likely the reason behind picking the name Sunburn. Apart from the refreshing effects it delivers, it is also as much because of its genetic lineage.

Forget the blues as soon as one sets foot on paradise. The daily grind is taxing but put one on a tropical island, and that alone is already energizing. And that is what one parent strain Island Sweet Skunk is notable for, and the fruity aroma is divine too.

Meanwhile, the other parent strain Rug Burn OG placed third in the 2012 High Times Cannabis Cup for hybrids. It was also listed as among the most potent strains on earth by High Times in 2014. Known as a dominant Indica, it also delivers an uplifting buzz.

In combining the best traits of the parent strains, it also resulted in a dazzling cerebral. We will cover this more in another section. Suffice to say, this mental high is unlike any other strains.

By all accounts, Sunburn could have been a common Sativa-dominant strain. But it has a unique effect that makes it a far more rewarding experience.

It acts fast and for many people, moments after using the strain, a euphoric buzz sets in. Feeling uplifted, most users also experience a gradual increase in creative thinking even as the mind starts to clear. Soon, an electrifying, energetic buzz surges into the mind causing an incredible effect that sets it apart from others.

As the intense Sativa effects assault the mind, what the users feel is a dazzling vision so bright that it is reminiscent of staring at the sun. Even as this experience led to its being named Sunburn, it does not mean it causes any harm. Far from it, most users will find the intense cerebral high as a journey to bliss.

Be careful though. Sunburn is a very potent strain. The last thing users want is to exceed personal tolerance limits. Remember, one of its parent strain Rug Burn OG is one of the strongest strains in the whole world.

Smelling Sunburn alone is enough to induce thoughts of tropical islands. Crystal clear water, beautiful sand, palm trees, and fruit shakes. Growing is in the garden or inside the house, the pungent scent of grapefruit should prove to be enticing.

Because of its desirable aroma, the reasonable expectation is that users can expect the same when it comes to its taste. Fortunately, they are not disappointed. Accompanying the tropical fruity flavor is a citrusy note that should keep users coming back for more.

The thing about smoking cannabis is that it also causes cotton mouth. Some users may even have dry eyes. As a rule, the best way to avoid side effects is to use as little as possible. Of course, that may also lead to a less-than-satisfactory experience.

As great as Sunburn and all its incredible cerebral high that alters the vision, it can also cause some people to have a headache. So, this is something users should be aware of too.

The euphoric and energetic buzz that Sunburn can deliver for two to four hours should be more than enough to combat the effects of fatigue. At the same time, it also helps in reducing the symptoms of stress. Patients with depression and PTSD may also benefit as it helps them manage their emotion better.

To a certain extent, Sunburn also delivers mild physical effects that help calm the muscles. As such, it may play a role in managing inflammation and even provide relief from mild pains and aches.

Sunburn is not the easiest nor the hardest cannabis plant to grow. It does require some experience for successful cultivation. As expected, it thrives well in a sunny climate. Growers also have a choice of planting it indoors or outdoors.

About the only concern with regards to planting it outside the house is that it can grow tall. As such, it may be visible from the road. If privacy is an issue, there is always to option to do it indoors.

Sunburn will likely grow well using soil as a medium. But for faster growth and better yield, it may be better to use hydroponics. Some of the works needed include topping it several times.

Based on its parents, it appears that Sunburn should be adaptable to the Sea of Green training method. It should be ready for flowering in as early as eight weeks. As soon as it is ready, growers at least should have a harvest of 12 ounces per square meter.

Out in the open, Sunburn will likely grow beyond 6 feet tall. As September comes to an end, it also starts to transition to the flowering stage. Each plant can produce 12 ounces of buds or more.

Have you ever smoked or grown your own Sunburn? Please let me know what you think about this marijuana strain in the comments below.