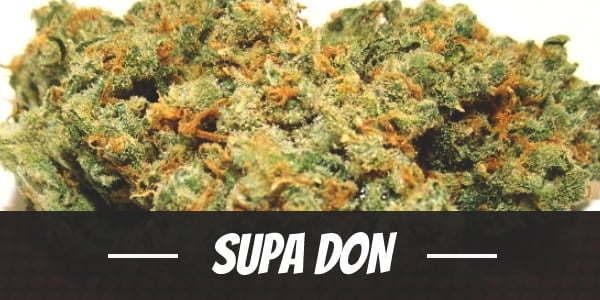 Sativa-dominant herbs are famed for its delicious terpene profile. It is no different for Supa Don. But, rather than the usual fruity flavor, it is high in beta-caryophyllene which is the cannabinoid that creates the spicy pepper taste in the palate. As such, the strain is highly appealing to lovers of the classic Indica taste.

In creating the strain, the breeders took Oregon Trainwreck (The Don) as a genetic base for its energizing head high. It was later paired with DJ Short Blueberry to introduce a fruity flavor that subdues the spiciness and adds a relaxing physical buzz.

At 18% to 20% THC, the fast-acting Supa Don implores the mind with a pleasurable cerebral high. It instills a positive change in behavior while calming stressful or anxious thoughts. It brings out all energy until one falls asleep immediately. For this reason, it can be a great companion for medicinal users.

Supa Don is a quick-acting strain that induces a high-flying onset within minutes after the first two to three puffs. An uplifting increase in mental energy that clears away negativity is immediately felt.

It frees the mind of distracting thoughts so casual users can focus on a single list of goals for the day. The added space prompts thoughts to fill, flow, and form without restriction igniting a spark in creativity. It sharpens the senses too so one can stay focused throughout a task.

Amidst the mental effects that the strain provides is a subtle body high. Instead of sedating users, it merely reduces the weighed down feeling that one experiences when constantly bombarded by stress. Combined with a lighter head and a heightened sense of motivation, one feels boosted to seize the day.

Supa Don is akin to a salad of blueberries and apricots sprinkled with flowers. The sweet fruity aroma is accentuated by a subtle spiciness that later turns into a strong herbal overtone when the buds are crushed or combusted.

Drawn in, Supa Don explodes in the palate with the fruity taste of blueberries and apricots. Its sweetness is perfectly contrasted by the spiciness of herbs. On the exhale, it leaves a floral aftertaste that lingers in the mouth for hours even after the last puff.

Like other strains, Supa Don induces a cottonmouth and dry eyes. Although mild, it can be an uncomfortable experience for users who are unused to its dehydrating effect. However, with water, one can ease the symptoms.

Although rare, the strain’s initial head rush can be quite overwhelming especially when used beyond one’s limitations. One’s sensitivity to paranoia can also be a factor. Regardless, one must always remember to pace consumption of the bud.

Supa Don is an excellent example of a Sativa-dominant strain. It stimulates the mind while filling it with a calming positivity. For this reason, too, it is a great anti-depressant that alleviates of symptoms of various of mental health issues like PTSD and anxiety apart from depression.

The psychoactive compound also has wondrous effects on an exhausted body. It sends an energizing buzz that surges throughout the muscles to reinvigorate users from fatigue brought about by tiredness.

In high levels, THC also turns into a natural painkiller. It eases aches and pains beginning from the head. Freed of physical hurt, compounded by the lightness in one’s head, users feel deeply relaxed enough to lay down and sleep.

Supa Don is quite a high-maintenance herb. Its lanky structure easily breaks as the weight of its heavy buds take a toll on its branches. There is also its propensity for a warm semi-humid environment, rendering it weak against the cooler weather of the northern hemisphere.

This is not to say that the plant will not flourish outdoors. Rather, it may need additional protection and support against any unfavorable environmental factors. For example, staking it will keep it from falling over due to strong winds. Meanwhile, a temporary enclosing will prevent it from freezing to death overnight during harsh weather.

For this reason, there are many northern growers who prefer cultivating the strain indoors where factors can easily be adjusted. It will need to be topped early though to keep it short. Applying High-Stress Training methods like super cropping will encourage plant potency as well as resilience.

During the early flowering stage, exposing the plant to colder temperatures will bring out its bluish hues. Its buds are covered with a decent amount of resin and milky trichomes.

It takes patience to grow Supa Don as it can take as long as 10 to 12 weeks to flower. Once done, the strain churns out a good 12 to 16 ounces of buds per square meter.

Supa Don blossoms from the last week of October to the middle of November at the latest. It can produce 16 ounces of buds or more per plant.

Have you ever smoked or grown your own Supa Don? Please let me know what you think about this marijuana strain in the comments below.