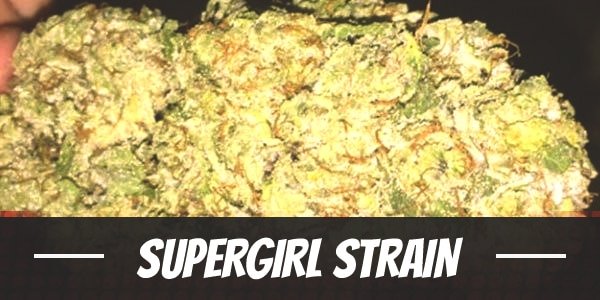 Supergirl is a real ‘super.’ It is coated thickly in trichomes and smell delicious. Not to mention, it delivers an amazing head to body high that entices various users.

Although largely renowned as a recreational strain, it is also therapeutic. Its 8% to 15% THC induces a soothing high that calms the mind and tranquilizes the physical symptoms for a variety of diseases or disorder. It brings back genuine smiles as patients enjoy a few hours of reprieve.

In creating the strain, Nirvana Seeds took the original Skunk #1 and backcrossed it multiple times. As a result, Supergirl is a sturdy strain that growers can cultivate indoors and out. Like its parent, it can also be used as a breeding companion to further strengthen an offspring’s frame. It also improves resin production.

During the onset, a rush of euphoria creates free space in the mind as it seeps into each crevice. Users are noticeably more happier as frowns turn to smiles. Others let out giggles as cheerful memories replace negativity. It boosts confidence too and, in doing so, it allows one to share stories freely.

An hour or two after the initial effects, a gentle buzz of energy surges through the muscles. It invigorates the body, soothing and calming away the tension prevent users from moving around. Keeping it from locking users to the couch is the cerebral rush at the onset which persists throughout the Indica effects. However, it does blanket users in deep relaxation.

The tingling sensation, as well as the freedom from inhibition, can be arousing for some users though. Hence, it is not uncommon for users to enjoy the strain with a loved one for a fun time ahead.

Supergirl is best used around the afternoon or on a day off. It can be counterproductive when used in place of coffee as, although stimulating, it leaves users feeling more conversational than conducive to work.

Supergirl has a strong earthy profile that fills the room with its woody undertones once a bag of its buds are opened. There is a hint of herbs along with spices. Breaking it apart reveals its coffee overtones that intensifies upon combustion.

Supergirl’s smoke is quite earthy mixed with coffee grains. It is slightly spicy with herbal undertones. However, on the exhale, a woody aftertaste washes over the mouth.

A cottonmouth is to be expected while using Supergirl. After all, it does contain cannabinoids that interfere with moisture production. It is usually accompanied by dry eyes especially as the symptoms of dehydration persist. But, it is mild, temporary, and easily mitigated by downing a few glasses of water.

Although rare, it is possible to experience paranoia especially when going beyond the limits of one’s THC tolerance. Because of this, users should pace the bud and consume it in moderation.

Chronic stress is a problem that has ravaged people of all ages. At its worst, it has led some to the deepest depressions while exacerbating the symptoms of various health issues. Because of this, it is necessary to release any of the accumulated stress throughout the day or the week.

To this end, Supergirl offers quick relief. It delivers a stress-relieving high by delivering a euphoric rush that leaves users feeling upbeat. It raises the mood as it brings back a sense of happiness from within. Meanwhile, its calming qualities soothe the worrisome thoughts that loom over one’s head. Hence, it also makes for a great anti-depressant that manages symptoms of depression, anxiety, and PTSD.

Apart from the mental or behavioral, Supergirl also exhibits therapeutic benefits for the body. It delivers a soothing high that relieves aches and pains beginning from the temples. At the same time, it reduces inflammation by appeasing redness and swelling. Because of this, it also makes for a great muscle relaxant that reduces the chances of spasms or contractions.

Supergirl is a sturdy plant that can withstand a variety of growing conditions. Still, it requires care especially against harsh weather such as the snow or heavy rains. For this reason, many growers prefer cultivating the strain inside controllable environments where temperatures, lighting, and humidity can be adjusted at whim.

It will need pruning when cultivated indoors. As alluded to earlier, it is quite branchy and dense with foliage. It can harbor moisture in between in the crevices of its broad fan leaves which inhibit light and air around the lower nodes if left unattended. Removing the parts will also improve nutrient distribution to healthier budding sites.

TIP: Buy seeds like Supergirl at my seed shop

The Sea of Green works best with Supergirl. Its short and compact structure allows growers to place at least four in a single square meter. It not only maximizes a small space while producing higher yields. Using soil as a medium will improve terpene production so buds are more flavorful. However, a hydroponics setup will double turnouts, increase trichomes as it directs nutrients straight to the roots.

It takes between 7 to 9 weeks for Supergirl to fully mature. Usually, growers can expect between 16 to 19 ounces of buds per square meter. However, growers can further increase yields by applying certain growing methods.

In the northern hemisphere, Supergirl flowers between the last week of September to the middle of October. Each plant yields at least 16 ounces of buds per plant at harvest.

Have you ever smoked or grown your own Supergirl? Please let me know what you think about this marijuana strain in the comments below.