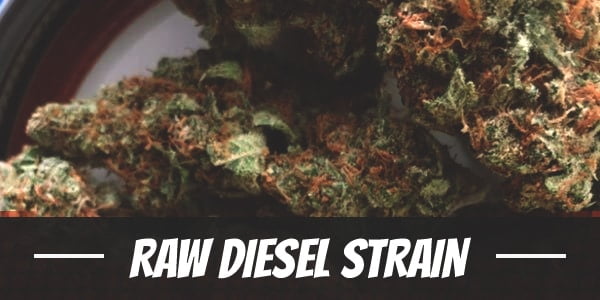 Raw Diesel is a strain that has the lips smacking to appease its sourness. It has a citric and diesel terpene profile that delivers a head-to-toe high with notable wake-and-bake qualities. Not to mention, it is relatively potent. Its THC levels average between 18% to 19%.

In creating the strain, G-13 used two legendary strains. From NYC Diesel, it gained its sour overtones along with a sociable party effects. It delivers a long-lasting happy high which inspires light but stimulating conversations. Meanwhile, the illustrious G-13 influenced its strong earthy profile, short flowering period, and sturdy growing profile. Not to mention, it has impressive THC levels.

Beginners looking for a strain to begin testing out a potent strain may start with Raw Diesel. Of course, one should use the strain within moderation under the guidance of a seasoned friend who can pace dosage.

Raw Diesel has a relatively quick onset. Its effects start within minutes after the first two to three puffs but do not slam the head with an overwhelming cerebral buzz. Because of this, it is a great strain to use when trying out potent strains for the first time. Just remember to use it in moderation though; Otherwise, it can turn a pleasant high into an overwhelming couch lock.

Its onset begins with a gentle euphoria that gradually intensifies. It leaves users feeling happy as pleasant thoughts fill the mind. It creates free space for thoughts to flow and form into ideas too. Thus, apart from the noticeable behavioral change, it also inspires a surge in creativity. Users can brainstorm effectively and with renewed motivation.

Two hours after the first few puffs, it continues to invigorate the body with a light surge of energy. It travels all over the body through the muscles, calming while reviving one’s initial limberness. Users move freely like a well-oiled machine, performing light physical tasks.

Because of its great wake and bake qualities, Raw Diesel is best used in the morning or early in the afternoon. Its energizing qualities stimulate the mind while removing stress. Using it at night leads to a later sleeping time.

Raw Diesel has an earthy profile with sweet hints of citrus. There is a subtle sourness too which intensifies after breaking apart the buds. It is usually reminiscent of lemon. However, the fruity scent later turns into a diesel overtone once it is combusted.

Raw Diesel’s smoke is quite sour. It fills the palate with the taste of citrus, unripe lemons, and diesel. However, swirling the smoke in the palate reveals a tinge of wet soil which adds a little bit of sweetness on the exhale.

Dryness in the eyes and mouth are to be expected while using Raw Diesel. After all, it does contain cannabinoids that interfere with the body’s ability to produce and retain moisture. At times, it can be dizzying too in spite of its mildness. Because of this, users may want to down a few glasses of water throughout the day to mitigate the symptoms.

In moderate levels, stress can be a catalyst for change. It catapults one’s will to strive for a better quality of life or increase one’s drive to chase after goals. However, being constantly exposed to stress can lead to the early onset or exacerbation of various health issues. Because of this, people must always find ways to release the stress.

Marijuana offers quick, short-term relief and, to this end, Raw Diesel works effectively. It reduces stress levels through its happy high that not only uplifts the mood, but also stabilizes emotions. Hence, it also works as a great anti-depressant that can manage symptoms of depression, anxiety, and other mental health issues like PTSD. One thing to remember though is that it is still better to turn to a medical professional for long-term management.

In high levels, THC turns into a natural painkiller that appeases various aches beginning from the temples. Because of this, many patients turn to the strain for chronic pain, headaches, and cramps or spasms caused by muscles suddenly contracting. Replacing it is a surge in energy that removes fatigue and exhaustion.

Raw Diesel has a hybrid structure. It is quite tall but rarely needs to be topped early. Not only that, it has a sturdy frame with thick branches that can support the weight of its heavy buds. However, it still needs to be pruned because of its dense foliage.

It works best with the Sea and Screen of Green method. The former maximizes space by placing more plants together in a single square meter. Meanwhile, the latter ensures that light is distributed evenly to create more budding sites while its relatively tall height is kept short.

Growers may also choose from a variety of mediums. Two of the most popular of which are soil, which enhances terpene production, and hydroponics, which delivers nutrients directly to the roots. It also hastens the flowering period while almost doubling yields.

Raw Diesel has an indoor flowering period of 7 to 9 weeks. Once fully mature, the high-yielding strain produces 16 to 24 ounces of buds per square meter.

In the northern hemisphere, Raw Diesel flowers from the last week of September to the middle of October. It yields at least 34 ounces of buds per plant once ready for harvest.

Have you ever smoked or grown your own Raw Diesel? Please let me know what you think about this marijuana strain in the comments below.