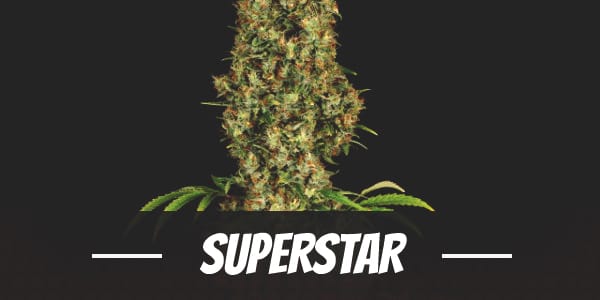 Superstar strain by Exotic Genetix is not to be confused by another hybrid called Super Star. Founded in 2008, the breeder has already produced several other hybrids that have won awards. Even as they continue to build their reputation, so too does the strain.

To create Superstar, first, the breeder had to resurrect a phenotype of the original Starfighter by Alien Genetics. Unfortunately, the original seems to be gone forever and the closest to it is the phenotype. Nonetheless, it remains to be one of the best hybrids that deliver an uplifting high.

Exotic Genetix then crossed Superstar with their very own award-winning Supernatural. Aptly named, this strain delivers an intense cerebral euphoria. Furthermore, it even placed second in the 2012 Seattle High Times Medical Cup.

In crossing these two strains, the breeder was able to create Superstar. As expected, it brings the best of both its parent strains and is one that is highly sought after. However, even with its notable effects and increasing popularity, it remains a little elusive in the market. Generally, as soon as it appears, it does not take long before it is snatched up.

As mentioned, there is another strain called Super Star. The best way to distinguish between the two is to look it its genetics. Exotic Genetix used Starfighter and Supernatural. The other one from Delta 9 Seeds is a double backcross of two male Sensi Star strains.

One way for this strain to justify its name is through its THC content. At 19% to 23%, Superstar stands out as a very potent strain that some people describe as insane. Hence, it is not in the best interest of users to underestimate. Used in moderation, it provides an exceptional blend of cerebral and physical effects. However, abusing it results in being overwhelmed. As for novice users, start off with a toke or two in the beginning before adding more in subsequent sessions.

Like many hybrids, the strain delivers its Sativa effects first. At its onset, it induces a euphoric cerebral buzz that results in users feeling uplifted. Feeling free of any burden, most people tend to feel happy and cheerful. Often, they also feel reinvigorated.

Feeling energetic, most users are able to stay productive. In fact, they may even become more efficient as one of the things that this strain can do is to induce mental clarity. A few people may also find themselves cranking out one idea after another.

As the physical effects of the strain start to make its way to the body, a sense of relaxation washes over the users. Its soothing and gentle buzz blends in with the Sativa traits in keeping the users in a perpetual state of bliss. Furthermore, most people also find themselves becoming more sociable.

However, if users are to consume more than their usual dosage or simply breach their tolerance limit, then the deep body relaxation is likely to lead to a couch-lock.

Superstar in effects, this strain is also as such with its sweet and perfume-like flowery perfume with a fruity note. Once sniff is all it takes to feel the urge to use it.

Succumbing to the temptation of its fragrance, the same delightful scent of Superstar carries over to its flavors. This time, it comes with a more distinct taste of blueberry and strawberry. The citrusy contrast adds to its exotic taste and should prove to be quite a treat.

Like other cannabis hybrids, Superstar is no different with regards to side effects. The most common reaction would be dry mouth and eyes. Compared to many others, it does have more tendency to cause users to feel dizzy.

As mentioned already, this is a very potent strain that should never be underestimated. Overusing results in more pronounced symptoms of the conditions stated above. Also, it can cause a few people to feel more anxious too.

To receive the second prize in the High Times Medical Cup, Superstar must have something to offer to the medical cannabis community.

One thing that it does exceptionally well is to provide relief from muscle spasms. In many ways, this is the same trait that also helps reduce tensions from the body, which in turn, leads to full-body relaxation.

To a lesser degree, the uplifting sensation brought on by the cerebral high can also help reduce stress.

Exceeding tolerance may lead to a couch-lock. While it can be viewed as a negative, it also brings benefits to people who need to rest. Fortunately, the strain does not seem to cause an intense cerebral buzzing.

The seeds of Superstar may be troublesome to obtain. At least, this variant from Exotic Genetix. Should one come across a few, then they have the option of planting it indoors or outdoors. Either way, it will thrive and produce a generous yield.

Growers will have no trouble cultivating Superstar inside the house or a greenhouse. Under a controlled environment, the plant will produce up to 14 ounces of buds per square meter.

Superstar can produce at least 14 ounces of buds. Its flowering period occurs sometime during the first two weeks of October.

Have you ever smoked or grown your own Superstar? Please let me know what you think about this marijuana strain in the comments below.