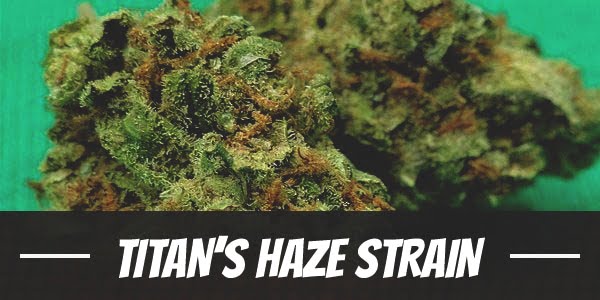 Haze is an immensely influential strain. It has parented multiple hybrids and passed on its genes to growers from different parts of the world. Not to mention, the Sativa strain is a staple among Californian enthusiasts with a propensity for intense head highs. However, it has a long flowering period that can last for months at a time.

Hoping to shorten the time Haze takes to blossom, breeders at the Flying Dutchman decided to cross it with the world-famous Skunk #1. Apart from its signature terpene profile, the hybrid is a quick-flowerer in the grow room with vigorous yields and an impressive trichome production.

Crossing the two results in the Sativa-dominant strain Titan’s Haze, which boasts the energizing qualities of its Haze parent and a relatively shorter flowering phase. It is also quite potent, with a THC content that ranges from 20% to 28%. Hence, it remains to be therapeutically valuable to patients dealing with aches and pains.

A quick-acting strain, Titan’s Haze delivers an energizing head-to-toe high immediately after the first two to three puffs. To the mind, it is a rush of euphoria that induces mental clarity. Replacing the scatterbrained thoughts are cheery memories that imbue an innate sense of happiness as the high progresses. Users may even turn into chatterboxes depending on the dosage.

After about an hour or two, a tingling sensation begins to trickle down from the temples. It oozes down to the muscles, soothing each limb until users are enveloped in a deeply relaxing blanket. In spite of its intensity, it does not lock one to the couch. Rather, it makes the body limber enough to perform light physical tasks to complement the initial head high.

One thing to remember though is to refrain from using too much of the strain in a single sitting. Not to mention, one should refrain from moving too much too. Otherwise, the heightened awareness can bring about a temporary dizziness.

Titan’s Haze has a pungent fragrance that can easily fill the room once a bag of the strain is opened. It has strong undertones of skunk with subtle notes of earth. Broken apart or combusted, its overtones of herbal spice are released.

Drawn in, its flavors of herbs and spices intensify with each toke. It develops a skunky undertone as the smoke swirls within the palate. On the exhale, however, it washes over the mouth with a sweet aftertaste to complement the initial zing.

Cannabinoids often interfere with the body’s natural ability to produce moisture. Hence, users experience dry eyes and a cottonmouth while smoking Titan’s Haze. Although mild and temporary, users who continue to experience the symptoms may down a few glasses of water throughout the day.

A rarer experience is greening out, which is a condition comprised of dizziness or anxiety. It may also be accompanied by a subtle feeling of paranoia if one continues to use the strain beyond limitation. For this reason, it is best to pace consumption of the bud by starting with low dosages before gradually building it up.

Titan’s Haze is of great therapeutic value to many patients. Its powerful cerebral rush takes the mind beyond the clouds, its mood-uplifting qualities are also a source of comfort to patients dealing with mental health issues such as depression, anxiety, and PTSD.

The happy high is also effective at dispelling stress. By encouraging cheery thoughts and an upbeat disposition, it removes the overwhelming dread toward work or school and life’s other stressors. Meanwhile, the energizing buzz also diminishes symptoms of fatigue.

In high levels, the same psychoactive compound naturally turns into an impressive analgesic. Beginning from the temples, it relaxes the muscles to prevent it from contracting uncontrollably or causing cramps. It also reduces redness, swelling, and inflammation which often trigger pain as it sends signals to the brain.

Climate and location are two important factors to consider when growing Titan Haze. This is because it has a propensity for the warm weather of the Mediterranean or equatorial regions where the days almost equal nights in length. Not to mention, it likes long to bask under the sun for hours at a time.

This is not to say the plant will not do well in the northern hemisphere. Rather, it may not flower as early since the weather is generally cooler and the days are much shorter. Moreover, it will need added protection such as a temporary enclosing against the cold and stronger winds as both will either stunt its growth or kill it off.

Growers may also move or fully cultivate the plant indoors. In this way, factors such as lighting, temperature, and lighting are easily adjusted. There is also full control with regard the medium and plant training technique used. For example, one can improve flavors by utilizing soil but soilless mediums such as hydroponics hastens its long flowering period. Meanwhile, the Screen of Green method will help create an even canopy with multiple budding sites.

While it need not be pruned often, topping the plant early is still recommended. In this way, growers can shorten the vegetative phase while managing its explosive growth spurt during the maturation phase.

TIP: Buy seeds like Titan’s Haze at my seed shop

Patience is a requirement when cultivating Titan’s Haze as, at 10 to 14 weeks, it has one of the longest flowering periods. However, it rewards growers with at least 14 to 16 ounces of buds per square meter.

In the northern hemisphere, Titan’s Haze flowers from the middle of October to the last week of November. A vigorous producer, each plant is expected to yield at least 16 ounces of buds.

Have you ever smoked or grown your own Titan’s Haze? Please let me know what you think about this marijuana strain in the comments below.