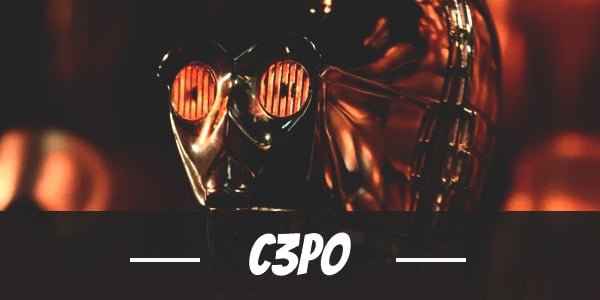 Enthusiasts need not travel to a galaxy far, far away to experience that C3PO brings to people who come across it. In fact, one only needs to buy a bag from sellers of Petrolia Farm’s standout product or travel to the famous Humboldt Country. After all, the allure of its amazing medicinal benefits is well worth the miles.

With an impressive CBD of 13% to 15%, C3PO is among the most effective therapeutic strains available in the market. It relieves the pain of inflammation while tranquilizing a worrisome mind. However, it may not be the perfect choice for an evening of recreational fun. At only 1%, and even less, the psychedelic effects it induces are barely felt.

Unlike the humanoid character from the famous Star Wars, its origin story is a huge secret among its breeders at Petrolia Farm. Still, it is a staple among cannabis enthusiasts for the comfort it provides.

Even with large doses, C3PO will not induce a powerful psychedelic high. Its THC levels are too low to have any significant effect that matches today’s more potent strains. Still, it is not devoid of it. In fact, though subtle, it delivers a soothing sense of relaxation that result in a change of moods.

Keen observers notice an uplifting cerebral buzz too that lends itself to deeper focus. For casual users, the open mindset also results in a free flow of thoughts that form itself into innovative ideas or groundbreaking solutions. This makes it a great wake-and-bake strain.

Enhancing one’s productivity or mental faculties usually reduces energy levels. As such, it is not uncommon for users to feel hungry after going through grueling hours of completing tasks. It is best to prepare snacks ahead of time to keep from breaking focus.

As the high wears on, the body becomes immensely relaxed as though a bulldozer were destroying pain, ache, and stress in its wake. Eventually, it plants a heaviness in the limbs that summons Mr. Sandman to guide one through the land of dreams.

C3PO has a scent akin to Pine-Sol. It hits the nose with a piney aroma followed by notes of citric lemon. Subtle sweet undertones become apparent as the buds are broken apart. Once combusted, it reveals a refreshing pine scent.

C3PO’s taste is not that different from its scent. Upon drawing it in, the flavors of tangy lemon and refreshing pine swamp the palate. On the exhale, the aftertaste of citrus lingers for hours after the last puff.

Like all cannabis strains, C3PO interferes with the production of saliva. As such, users end up with a cottonmouth. Although mild, some users may find the dryness uncomfortable. Thankfully, it can be eased by drinking water and staying hydrated throughout the day.

Stress is a condition that all people suffer from at one point. However, for others, it is a chronic issue that exacerbates other health problems like hypertension, PTSD, and anxiety. It can also lead to the early onset of depression if left unattended. As such, it is imperative that users release any accumulated stress and, to this end, C3PO works effectively.

Its calming euphoria relieves the mind of negativity while reducing the dread one feels with regard to life’s stressors. Because of this, it also works as an anti-depressant that manages symptoms of mental health issues while providing users with comfort from the despair.

Many studies have shown CBD to be an excellent analgesic as well as anti-inflammatory agent. And, at up to 15%, C3PO rids its users of pain from headaches, migraines, or tension in the body. At the same time, it reduces redness and swelling in an inflamed area that may cause painful involuntary contractions in the muscles.

It is not uncommon for users to feel drowsy once C3PO takes effect. After all, it plants a heaviness in the limbs that deeply relaxes both the body and mind. As it intensifies, users are sent to a deep slumber that is not only enhanced in terms of quantity but also of quality.

C3PO has the distinct traits of an Indica-dominant strain. It is sturdy enough to withstand various issues such as sudden changes in temperature. Moreover, its stalks and branches do not easily break from either strong gusts of wind or the weight of its heavy buds.

In spite of this, one cannot completely say that C3PO is an easy grow. Its classification as a medicinal strain requires the utmost care of a seasoned grower with knowledge in enhancing the CBD content of a strain. For this reason, too, it is mostly grown indoors where green thumbs can easily adjust important factors like lighting, temperature, and humidity to bring out its full potential.

When it is grown indoors, growers may use soilless mediums such as soil or hydroponics to enhance yields and improve its cannabinoids. Applying Low Stress Training techniques such as the Sea of Green method and pairing it with Super Cropping will improve trichome production as well.

This is not to say the plant will not perform well outdoors. Rather, it will need additional support and protection against the whims of a natural climate. Regardless, once its flowers are harvested and cured, it will catch the eyes with a visible coat of crystal trichomes that make the green buds appear milky.

Currently, Petrolia Farm has a proprietary hold on its medicinal C3PO strain. Its seeds are not online and neither is it sold anywhere else. However, the breeder’s move ensures its users only smoke a certified CBD-enriched strain from its farms.

Indoor growers can expect C3PO to fully bloom in 7 to 9 weeks. When it’s grown by the right person, it is possible to get 10 to 12 ounces per square meter

Backyard cultivators should be finished by the middle of October at the latest. Once done, they’ll be able to harvest 12 ounces or more per plant.

Have you ever smoked or grown your own C3PO? Please let me know what you think about this marijuana strain in the comments below.