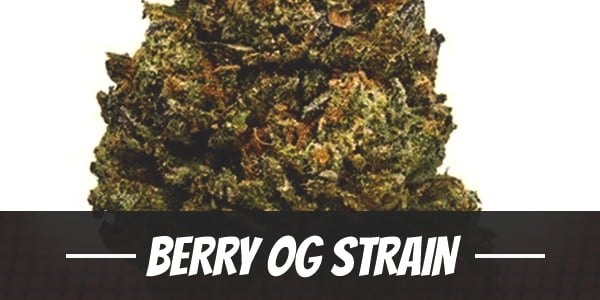 Not all marijuana is made equal with some remaining popular despite being around the industry for decades.

Worthy of their hype, breeders use such strains as a genetic base to create a new generation of hybrids such as Berry OG.

The exact origin of the strain, though, is vague. Some people think it is a descendant of Hashberry.

However, the consensus is that it takes its delightfully fruity qualities from Blueberry.

Once an underground favorite, this hybrid shot up to worldwide fame after winning the 2000 High Times’ Cannabis Cup for Best Indica.

The other parent strain is OG Kush. Since its arrival in Los Angeles, it has parented almost every variety found in California, Oregon, and Washington.

Besides its distinctive earthy pine scent, it is also one of the best Indica hybrids to have originated from the west coast.

From both, Berry OG’s breeder ensured the creation of an Indica leaning hybrid that is as fragrant and as powerful as its heritage.

Berry OG is an incredibly fast-acting strain. Due to its highly potent THC of up to 20%, the high sets in within minutes for most people. Beginning with a euphoric cerebral buzz, it results in users feeling uplifted and more positive. As negativities fade away, it leaves users feeling happy.

Aside from an upbeat mood, the strain also induces mental clarity and sharper focus. During this early stage, most users can continue to stay productive.

In time, a light pressure begins to form from the temple and between the eyes. It gently spreads down to the body bringing a calming sensation. Gradually, it intensifies to put users in deep relaxation. In some cases, it might also cause a couch-lock.

Berry OG is an excellent strain for late afternoon to early evening use. Although pronounced, the cerebral effects are not at all overwhelming. And, most users fall asleep after the full body high kicks into high gear.

Perhaps the best way to describe the aroma of Berry OG is to grind the buds of Blueberry and OG Kush, and then mix it up. Boasting of an earthy and woody fragrance with a distinct note of berry, it has proven to be just as delightful as its predecessors.

Much like how it smells, Berry OG has a sweet and piney taste. On the exhale, it has a flowery hint with an aftertaste of wood. Moreover, the toke is smooth and does cause bouts of coughing.

Cottonmouth and dry eyes are two typical reactions that come with consuming Berry OG, or any other strain of marijuana for that matter. The good thing is that of these are quite mild and unnoticeable. However, if one were to smoke too much, a mild headache may ensue. Those with low tolerance to THC might experience slight paranoia and anxiety. Though this is rare, users should remember to use the strain in moderation.

Berry OG is an excellent stress buster. The euphoric effects it induces makes for an effective anti-depressant. However, its medical benefits are not from its cannabinoids. While its average CBD content has medical benefits, much of its use is likely due to its psychoactive properties.

Because of its analgesic properties, the strain can relieve or alleviate chronic pains. As it puts users in deep relaxation, it helps in reducing muscle aches.

Like a blanket of relaxation, Berry OG makes users feel extremely comfortable. Soon enough, drowsiness sets in and people, even the ones with extreme trouble sleeping, fall into a deep slumber.

Most of the time, users wake up feeling hungry, making the hybrid good for stimulating the appetite.

Like its parent strain, OG Kush, Berry OG is prone to disease, mold, and pests. It also needs more attention than usual. As such, it is best grown by experienced growers.

Under proper care in an ideal environment, though, it can produce tremendously dense trichome covered buds during harvest.

Cultivating Berry OG in an indoor grow room is a grower’s best bet. With more control, breeders can ensure that the strain is not exposed to weather changes. Topping it early is recommended to keep it short. After flowering for a period of 8 to 9 weeks, it can produce more than 17 ounces per square meter.

Temperature-wise, this strain grows best in warm climates. But, as alluded to earlier, Berry OG is prone to disease and infection. Thus, in contrast to its outstanding performance indoors, it does not do as well in the open air. Moreover, the weather’s unpredictability creates problems in cultivation. Those successful, however, can expect the plant to flower between the second and third week of October. During harvest, yields are at least 20 ounces per plant.

What is the Berry OG strain yield?

How much THC does Berry OG have?

What are the origins of the Berry OG strain?

Berry OG was created from a mix between Blueberry and OG Kush.

Have you ever smoked or grown your own Berry OG? Please let me know what you think about this marijuana strain in the comments below.