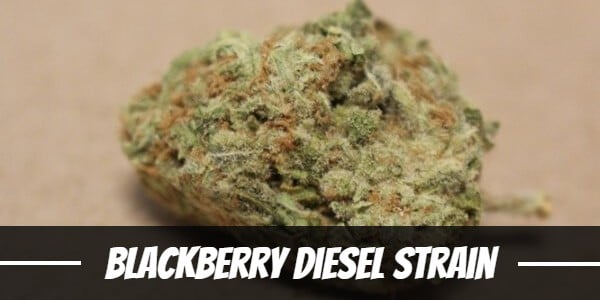 Without a doubt, East Coast Sour Diesel is one of the world’s most famous strains. Its cerebral effects and distinct aroma are easily distinguishable among more than a dozen strains in the cannabis industry. For this reason, it has easily become a favorite among enthusiasts and growers alike.

In adding a twist to its impressive genetics, an unknown breeder decided to cross ECSD with Plushberry. The latter added a subtle sweetness to the former’s sharp diesel flavors. Not only that, it also influenced its offspring’s colorful yields.

True enough, Blackberry Diesel is a stunner. Every single bud it produces boasts an array of hues that range from purple to lavender. And, like the famous East Coast Sour Diesel, it boasts a high-flying head buzz that takes users on a cerebral journey.

While its potent THC levels of up to 23% are widely regarded for its recreational use, it is quite useful for medical marijuana users as well. It eases away aches and pains while relieving a mind bombarded by stress.

Blackberry Diesel’s effects manifest rapidly. Almost immediately after the first puffs, an incredible bliss takes over the mind. It wraps users in a blanket of euphoria that comforts aching souls and tired spirits.

Looking to buy seeds like Blackberry Diesel? Check out our marijuana seed bank.

With problems forgotten, users bask in an innate sense of happiness that lasts for hours. The giggles strike as one revels in the strain’s uplifting head high. Even the most minute of stimuli triggers a seemingly never-ending laughter.

With time, a warm sensation trickles down from the temples. It ebbs down slowly and makes its way throughout the body. Though intense, it does not plant a heaviness in the limbs. Rather, it frees the muscles of tightness and tension. Moreover, it improves productivity by allowing users to engage in tasks without feeling tired.

The newly found release from mental and physical inhibition can be quite arousing for some. As such, one may use the strain with a loved one to fulfill plants of all-night fun.

Even from across the room, a pungent diesel aroma fills the air once a bag of Blackberry Diesel is opened. Lying beneath the strong overtone are sweet and sour undertones of berry. As the buds are crushed, it emits a dank earthy scent.

Drawn in, the mixed taste of sweet berries and grapes fill the palate. Accentuating it is a subtle sourness that one can trace back to its diesel overtone. Meanwhile, the exhale boasts a spicy aftertaste with hints of wet soil.

Due to Blackberry Diesel’s potency, users sometimes experience dizziness or a headache. In rare cases, it can develop into a subtle feeling of anxiety that lasts for hours on end. As such, it is important to pace consumption of the strain or stay within limits.

Because of moisture-inhibiting cannabinoids, users will almost always experience symptoms of dehydration especially in areas like the eyes and the mouth. Though mild, the discomfort can be an annoying experience especially for beginners unused to the dryness. In such cases, it is best to down a few glasses of water throughout the day.

Constant fatigue is a serious problem that many people ignore. If left unattended, it can lead to the early onset of various health issues such as depression or chronic aches. Stress is a major factor that contributes to its intensity. As such, addressing it also requires relieving users of stress.

Blackberry Diesel’s happy high relieves a myriad of symptoms that stem from constantly being exposed to stress. First, it calms the mind while simultaneously getting rid of negative thoughts. It replaces hopelessness with an innate sense of tranquility. For this reason, too, it is effective against mental health issues like depression, anxiety, and PTSD.

Another aspect the strain is effective at is enhancing appetites. Users dealing with eating disorders similar to anorexia or patients dealing with cachexia find comfort in the strain’s ability to ease cramps in a food-deprived stomach. Moreover, enjoying a bite out of one’s favorite food is much more fulfilling.

In high concentrations, THC acts as an analgesic. As such, it should as no surprise that headaches, tired muscles, and pains all over the body disappear.

Climate and location are two important factors growers must consider when cultivating a like Blackberry Diesel. Being predominantly Sativa, it prefers the warmth and long days of the Mediterranean. Of course, this is not to say that the plant will not do well in the northern hemisphere. Au contraire, it flowers quite well. However, it may need a few extra weeks to fully bloom. For this reason, many prefer cultivating the strain inside controllable environments where growers can easily adjust factors to mimic a warm, semi-humid environment.

Indoors, growers will need to top the plant early. This is because its stalks stretch too tall for the limited vertical space of an indoor growing space. Bending, as well as pruning, will help circulate air and light around the lower canopy better. Trimming away dead parts of the plant also improves nutrient distribution among the healthier branches.

Without a doubt, the best place to grow Blackberry Diesel is in a garden or a farm. The soil enhances its delicious terpene profile while the nutrient-rich sun improves its yields. Not to mention, the breeze help dry any droplets of moisture stuck in between the herb’s foliage. Growers will need to stake the plant for additional support though. Due to its lankiness, it can easily break when fazed by strong gusts of wind.

Blackberry Diesel flowers quite late usually about 10 to 12 weeks. The plant rewards patient growers with 12 to 16 ounces of buds per square meter. However, one may want to install carbon filters all around the grow room as its scent can easily overpower the nasal senses.

Garden or farm-grown Blackberry Diesel flowers by late October to mid-November. Once ready for harvest, it yields 16 ounces of buds per plant. Under the hands of a seasoned grower, it is possible for the plant to produce more.

What is the Blackberry Diesel strain yield?

How much THC does Blackberry Diesel have?

What are the origins of the Blackberry Diesel strain?

Blackberry Diesel was created from a mix between East Coast Sour Diesel and Plushberry.

Have you ever smoked or grown your own Blackberry Diesel? Please let me know what you think about this marijuana strain in the comments below.