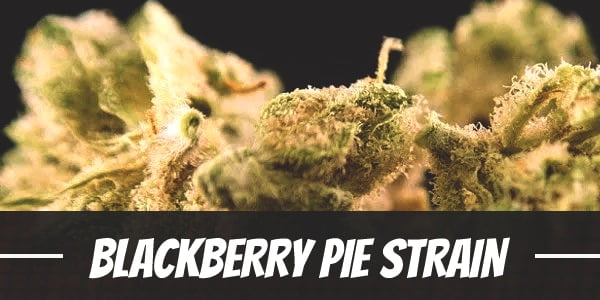 Blackberry Pie is an interesting strain. Although its name is Blackberry, it tastes more like crushed blueberries with a woody hint of pine.

Its aroma is quite therapeutic as it invigorates the senses with its delicious scent.

Its effects are equally medicinal as it delivers a restorative head-to-toe high.

In creating the strain, Gage Green used Blackberry Widow as a genetic base.

It has a smooth smoke with enticing berry flavors and a fruity scent that tantalizes the scent.

On the other hand, Crystal Locomotive is a rare clone-only breed that remains popular for its energetic high.

Not to mention, it has significant pharmacological effects that render patients with relief.

It has the right amount of THC levels that allows users to pace dosage and manage the type of experience one wishes to have.

Blackberry Pie has a slow-starting onset. Usually, its effects do not start until after 15 to 20 minutes have passed.

It is quite potent though with THC levels averaging at 16% to 17%.

So, one must always be cautious when it comes to using the strain.

It introduces itself as a tingling sensation in the temples that swarms the mind like a soothing buzz.

A change in behavior is immediately visible along with a feeling of weightlessness.

It inspires a mental clarity and euphoria that brings about a happiness from within.

For casual users, it can be a source of creativity as the clear mind provides space for thoughts to flow and form freely into ideas.

The same buzz intensifies after about an hour or two. It soothes each muscle as it trickles down from the temples.

Relaxation blankets users as the physical high continues to persist.

If used beyond moderation, it is likely that one will be locked to the couch and unable to move.

Although it has a stimulating onset, Blackberry Pie is still best reserved or use at night.

Its body high plants a heaviness in the limbs that makes the eyes droop.

In all likelihood, users will eventually be enticed to sleep which will be counterproductive in the morning.

Contrary to its name, Blackberry Pie’s sweet berry terpene profile is much more like blueberry.

It has a hint of woody pine along with a dash of hash that intensifies after crushing the buds.

Combusting it, on the other hand, reveals its undertones of incense.

Notes of blueberry and sweet berries blend into a fruity smoke in the mouth.

It is tantalizing especially with its refreshing notes of pine.

Along with the woody overtones are its undertones of incense. It tapers into an aftertaste of hash on the exhale.

It is not uncommon for users to experience dryness in the eyes and the mouth.

After all, Blackberry Pie has cannabinoids that interfere with moisture production regardless of dosage.

Beginners may down a few glasses of water to ease the discomfort which lasts for a few hours.

Avoiding caffeine and alcohol will also prevent it from exacerbating.

It has impressive therapeutic effects that provide patients with a reprieve against a wide variety of health issues.

Hence, it is an effective source of reprieve.

Its uplifting high, although subtle, removes the dreadful negativity one develops due to stress.

At the same time, its calming euphoria slows down the fast-paced thoughts often associated with anxiety and other mental health issues.

As such, it is an effective stress reliever and anti-depressant that manages symptoms of depression and PTSD.

It delivers a soothing high that eases the body of tension and tightness.

Its anti-inflammatory properties, on the other hand, will reduce redness and appease swelling.

In doing so, it relieves pain and aches around the body especially caused the type caused by inflammation in the muscles.

Blackberry Pie is a hybrid that exhibits traits from both Indicas and Sativas.

It is relatively tall with a thick frame that can withstand various growing factors such as the cold or strong winds.

Because of this, it is a great strain to grow outdoors in the northern hemisphere because of its resilience.

It will still need to be provided protection against harsh weather that will wear it down including snow or heavy rains.

If left alone, it can kill the plant overnight or stunt its growth.

In such cases, it should be enclosed in a tent-like structure or moved indoors.

It will need to be topped early for easier height management.

At the same time, cutting the vegetative period short will lengthen the amount of time for the strain to increase bud production.

Another way to improve yields is by utilizing Sea or Screen of Green method.

Blackberry Pie has an indoor flowering period of 7 to 9 weeks.

Once ready for harvest, it produces between 12 to 14 ounces of buds per square meter.

Like other strains, Blackberry Pie grows best when it is under the sun.

It yields at least 14 ounces of buds per plant at harvest – which usually falls around the last few days of September to the middle of October.

Have you ever smoked or grown your own Blackberry Pie?