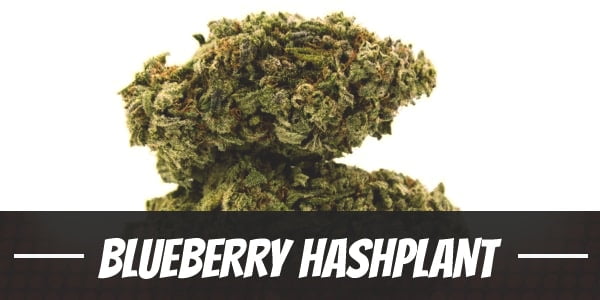 Blue Dream is a delicious blueberry-flavored bud with potent medicinal effects. It wakes the mind with a gentle invigorating rush of happiness to the brain, while cradling the body in deep relaxation. It is also an outstanding performer in the grow room. Not only does it yield high, it is incredibly sturdy.

Hash Plant, on the other hand, is a Sensi Seed classic associated with desired Indica qualities. It has a superbly short flowering time, boasts a thick coat of sparkling resin, and has a heavy trichome production. Its Afghani genes give it a hash undertone with spicy overtones.

Combining the two resulted in Blueberry Hashplant. The Indica-leaning strain exhibits a short flowering time, a bushy frame, and good resistance to molds. Its smoke is a blend of blueberries and spice which bring out a flavorful smoke. Its recreational and medicinal capabilities are impressive as well. It induces a stimulating head to toe high that turns the day into a productive streak. At the same time, users can also turn to it for comfort against stress, depression, and aches or pains.

At 18% to 24% THC, it is clear that Blueberry Hashplant is a thrill seeker’s strain. This is not to say that beginners should totally avoid the strain. Rather, it will require the presence of a seasoned friend to oversee dosage as well as moderation.

At the onset, Blueberry Hashplant delivers a buzz of energy that reinvigorates the body. Its effects are first felt around the temples as a light pressure that calms the mind and clears it of negativity. It leaves users feeling innately happy as it continues to move worries or distractions.

For casual users, the upbeat disposition is a source of inspiration while the mental clarity creates more space for free-flowing thoughts to form into new ideas. It ushers fresh perspectives that provide new insight into situations at work. Complementing the rush of creativity is sharper focus which, together with a pique in curiosity, entices users to pursue tasks or projects endlessly.

The long-lasting high does not leave users feeling unmotivated or lazy at the comedown. It continues to loosen tight muscles, so the body moves like a well-oiled machine. Simultaneously, it keeps tiredness at bay.

Blueberry Hashplant has a pungent aroma reminiscent of blueberries. Bringing out its sweetness is a spicy undertone similar to hash. Breaking it apart or combusting, however, reveals its berry overtones once more.

Coating the palate is Blueberry Hashplant’s fruity smoke. It is a blend of blueberries and berries that are both ripe with sweetness. Enhancing it is a subtle spiciness that further intensifies into a hash aftertaste on the exhale.

Experiencing a cottonmouth is normal when smoking Blueberry Hashplant. It is due to moisture-inhibiting cannabinoids that interfere with the production of saliva. Along with it is a case of dry eyes that, though long-lasting, is mild enough for users to ignore. Downing a few glasses of water throughout the day will keep the discomfort at bay.

Blueberry Hashplant’s cannabinoids induce significant therapeutic relief once it binds with the body’s endocannabinoids. It has an uplifting head high that clears the mind of worries and distractions, calming anxiety and managing symptoms of depression. The sharpened senses raise focus for patients dealing with the distractibility and restlessness that comes with ADD/ADHD.

Mental health issues are often exacerbated by stress. In this regard, Blueberry Hashplant makes for an effective stress reliever. Apart from its cerebral onset, it reduces the overwhelming dread and temporarily blocks feelings of helplessness or hopelessness. Replacing it is a newfound motivation to complete tasks or pursue personal projects sourced from an innate sense of happiness.

It also addresses physical aches and pains such as headaches, muscle tension, and fatigue through its tranquilizing body effects. Dosing up will eventually turn the soothing buzz into a blanket of relaxation that lulls users to bed with its sedating properties. At the same time, it also enhances both the quality and quantity of sleep, so users wake up feeling refreshed and energized for the next day.

Blueberry Hashplant has multiple traits that exhibit its impressive lineage. For instance, it grows vigorously. It can reach up to a height of 9 feet and develop a bushy frame as its foliage develops rapidly throughout the growth cycle. Additionally, it is also sturdy and naturally resistant to mold or mildew.

It grows best in a dry, sunny environments but cultivating it can also withstand the cold weather of high altitudes. Thus, it is perfect for outdoor growing in gardens or farms. Alternatively, growers may also opt to move it indoors where it is easier to control factors like lighting, temperature, and humidity.

Using the Screen of Green is highly recommended when growing Blueberry Hashplant. The setup manages its height by ensuring that it does not go beyond the screen placed above the plant. At the same time, it evens out the canopy for better light distribution which improves bud production.

Growers may also opt for the Sea of Green method, which requires placing at least four plants in a designated area and coaxing each of its single colas into maturity. Because of the dense foliage, it is possible for it to inhibit air circulation in the lower nodes. In this regard, one may prune the plant or thin it out by removing dead branches or leaves as well as install fans and an efficient ventilation system that will reduce moisture in the air.

TIP: Buy seeds like Blueberry Hashplant at my seed bank

Blueberry Hashplant has an indoor flowering period of 7 to 9 weeks. At harvest, it yields at between 10 to 12 ounces of buds per square meter. Growers can maximize bud production by training the plant with growing methods.

Blueberry Hashplant blossoms around the last few days of September to the middle of October. Growers can expect it to produce at least 12 ounces of buds per plant once it fully matures.

Have you ever smoked or grown your own Blueberry Hashplant? Please let me know what you think about this marijuana strain in the comments below.