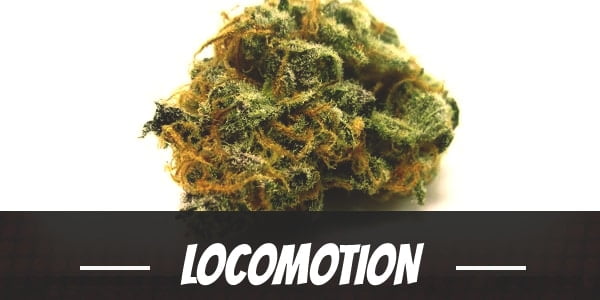 With its 17% to 18% THC, the indica dominant Locomotion strain provides patients with a reprieve against a wide variety of illnesses. This is precisely why it remains of value to users from the medical marijuana community.

TGA Subcool is among the most well-regarded artisan breeders in the cannabis industry. In collaboration with Heroes of the Farm, The Weed Nerd took the company’s best and rarest Blue City Diesel, a strain with an expansive high, to create a hybrid that would catch the world’s attention. And among the hundreds and thousands of products available, what better choice is there than TGA’s very own Timewreck? The fruit-flavored Sativa-dominant strain is famous among its peers. Not only as an award-winner, but for its potent therapeutic value.

From this fated cross is Locomotion, a strain that takes users from one place to the other within a matter of seconds. Like its parents, it delivers a dreamy cerebral high that uplifts the spirts and enhances the mood. However, the Indica genetics of the hybrid are stronger compared to its parents and manifest quite strongly in the effects it induces too. For example, it has the capacity for locking enthusiasts who overindulge in its potency to the couch.

Locomotion is a fast-acting herb in spite of its Indica-leaning genes. In almost an instant after the first few puffs, it delivers a happy high that uplifts the mind. It replaces negativity with a positivity that radiates all throughout the body.

The behavioral effects are immediately noticeable. Frowns turn upward as feelings of inner peace and tranquility manifest. If anything, the feeling is that of dopey contentment.

After about an hour or two, a light pressure begins to trickle down from the behind the temples. In waves, it soothes each muscle until a blanket of relaxation seemingly wraps the body. Moving becomes difficult too, as its heavy-hitting physical effects take over.

Signaling the backend of the effects is sleepiness. At first subtle, it later intensifies as it draws Mr. Sandman closer to take users on a journey to dreamland.

Locomotion has strong earthy scent that, at first whiff, reminds anyone of fresh soil. Notes of hash as well as sharp diesel undertones fill the room once the buds are either broken apart. Once combusted, subtle notes of sweet but refreshing pine disperse.

Drawn in, the flavor of diesel leaves a sour taste in the palate. Accentuating it are sweet notes of earth and pine that intensify on the exhale.

Dizziness and headaches are two common reactions to Locomotion. Though both easy to manage, it can develop into a subtle feeling of paranoia with when continuously used excessively. Pacing and moderation are key to enjoying the bud and its pleasant effects.

Moisture-inhibiting cannabinoids are present in all cannabis strains. As such, it is not uncommon for users of Locomotion to experience dry eyes and a cottonmouth. The discomfort usually last for hours but is quite mild that seasoned enthusiasts often ignore its symptoms. However, beginners may have to stay hydrated throughout the day by downing a few glasses of water.

Cannabis almost always lightens the moods of its users. As such, it can be used as an anti-depressant and stress reliever. It is a choice among many enthusiasts for unwinding after a long day at work or school. Moreover, the happy high effortlessly rids the mind of overwhelming dread or fast-paced thoughts filled with anxiety.

Apart from its uplifting behavioral effects, Locomotion also has a relaxing body high that provide the bud with effective painkilling properties. In the stomach, it relieves various aches and pains that result from cramps. For this reason, it provides comfort to patients experiencing nausea.

Sleep is one of the most important components in the healing process. It hastens the regenerative process so people get better quicker. Through its sedating effects, Locomotion entices the mind and body to rest. Not only that, the bud enhances the quality and quantity of sleep.

Locomotion is not at all a finicky plant. It is short, sturdy, and quite vigorous. As such, it rarely needs the constant attention and care of its growers. Still, knowledge of basic growing techniques is a requirement in tending to the Indica-dominant plant.

For example, although it rarely requires topping, it is best to match its height with the vertical space available in one’s growing area. Pruning and thinning out the plant will help aerate and spread light through the lower nodes. This will also remove the dead parts that inhibit the distribution of nutrients.

For indoor growers, applying the Sea of Green method will help increase yields and improve trichome production. As for mediums, hydroponics is a great choice for “cleaner” buds. Still, old-fashioned growers that prefer to use soil for terpene improvement with additional fertilizer.

When flowering, Locomotion exhibits buds with a wide array of colors. Covering each are brown hairs and a layer of trichomes which can produce a pungent scent.

At the moment, Locomotion is only available in regular form. This means that at least half of the plants will develop into males. For this reason, it is important to apply pre-germination techniques will increase the chances of getting a female plant while Low-Stress Training will ensure it does not turn into a hermaphrodite.

A fast-flowering plant, Locomotion fully blooms within 7 to 9 weeks. It yields between 14 to 18 ounces of buds per square meter.st.

Outdoors, Locomotion usually flowers from the last week of September to the middle of October. Once ready for harvest, it yields between 25 to 42 ounces of buds per plant.

What is the Locomotion strain yied?

Locomotion yields 14 to 18 ounces per square meter indoors and 25 to 42 ounces or more per plant outdoors.

How much THC does Locomotion have?

What are the origins of the Locomotion strain?

Locomotion was created from a cross between Blue City Diesel and Timewreck.

Have you ever smoked or grown your own Locomotion? Please let me know what you think about this marijuana strain in the comments below.