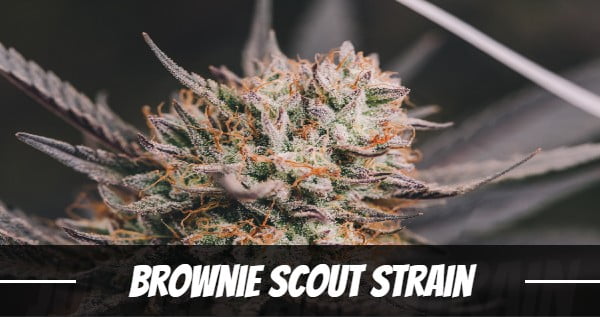 There aren’t many marijuana flowers that can match the THC levels in the Brownie Scout marijuana strain.

This indica-dominant hybrid (70% indica, 30% sativa) is known for packing a dynamite hit. It’s no wonder, then, that this strain is a top choice for many marijuana connoisseurs.

But it is their thick, shiny white coating of trichomes that is a favorite among fans.

This hybrid, however, is not for the less experienced. Stronger strains usually boast THC levels in the high 20% range.

Brownie Scout cultivars consistently hit above 30% — a whopping 38% is the highest recorded.

Other strains might give a strong head high, but Brownie Scout’s brain fog is simply out of this world.

Its exact origin is a little murky; many believe GTI created the THC-heavy strain by crossing Platinum Girl Scout Cookies (GSC) with the Great Divide.

The latter is an in-house GTI hybrid — a cross of Phishhead Kush and Kosher Kush.

The Brownie Scout Strain has an earthy, piney profile and intense high – common characteristics for its OG Kush lineage.

Brownie Scout may be the youngest descendant of the GSC family, but there is nothing juvenile about this strain’s high.

The initial hit infuses sensations of joy coupled with intense brain fog, unlike anything you have experienced before.

Along with your mind, you will feel your body also melt away into the land of utter relaxation.

For some, the high can get so intense that even the thought of standing up from your laid-back position can feel tiring!

Sometimes, physical or psychological pain can get too hard to manage.

Many a Brownie Scout strain review speaks highly of its ability to quell bodily pain.

It is one of the top choices for those who depend on herbal methods to ease their body spasms, aches, and pains.

Similarly, this hybrid’s head high leaves no space for any troubling thoughts to develop.

With a new-found sense of calm and utter peace, individuals who find it difficult to get sleep can enjoy some serious slumber mileage with this THC-heavy (but low CBD) strain.

Fresh out of the bag, the buds have an unmistakably earthy aroma. A few whiffs deliver undertones of pepper, pine, and floral.

The dense smoke on the exhale has a more herbal aroma. Some describe it as a floral/fruity aroma.

With its whopping THC levels and earthy flavor, Brownie Scout can calm your body and mind and lull you into a deep, relaxing slumber. Find similar seeds in our seed bank.

The Brownie Scout marijuana strain has a characteristic earthy, spicy, and herbal profile.

The inhale introduces you to mocha and chocolate flavors, whereas flavor notes on the exhale include the likes of herbs, citrus, and gasoline.

A strain with such a high potency sometimes produces effects that everyone cannot handle.

As per a Brownie Scout strain review by various users, this flower is no different in that regard.

Extremely high THC potency in marijuana is infamous for inducing nausea and vomiting in some first-timers. So, if you are new to marijuana and its effects, do not experiment with Brownie Scout.

Also, a case of the munchies can creep in unexpectedly for some. So, have snacks on hand just in case.

Another “side effect” of its high THC potency is that it can make you really sleepy, really fast.

Unless you have an extremely high tolerance, expect to be lulled into a deep, sleepy state towards the end of a Brownie Scout session.

Other side effects could include cottonmouth and dryness around the eyes and nose.

However, these happen to be standard with most — if not all — marijuana strains. The trick is to keep yourself hydrated. Keep a big bottle of water handy, take a few sips in between puffs, and you should be fine.

There is confusion around the exact origins of this hybrid marijuana. Much of its origin information is proprietary.

Due to these factors, acquiring Brownie Scout strain seeds or clones, for that matter, tends to be difficult.

However, this strain has a lot in common with GSC (Girl Scout Cookies), meaning the same grow techniques would work well here too. It is moderately difficult to grow.

With regards to GSC, growing this strain will be manageable both outdoors and in.

When growing outdoors, the plants develop a bushy appearance with numerous bud sites.

For that reason, you should top off the upper growth. Also, greenhouse gardens tend to be best when growing this strain outdoors.

Indoors, these plants will need close to 18 hours of light. So, consider investing in grow lights.

This strain produces small-sized but dense popcorn buds, glistening in trichomes. These dense buds could attract mold and mildew, so be sure to keep your growing area well ventilated.

Strains of this nature stay happy and healthy when you feed them lots of nutrients.

The heavier the feeding schedule, the better these plants perform during their one-month growing cycle.

During the flowering phase, the plants will need 12 hours of light followed by 12 hours of darkness,  in alternation.

The flowering time indoors takes between eight to nine weeks. Flowering time varies based on the health of the plant.

The indoor yield of these plants will be more on the moderate side. Increase the harvest by providing plenty of light and maintaining stable temperature and humidity.

Outdoors it should, under normal circumstances, be ready for harvest by late September or early October. The outdoor yield will be moderate.

Want to grow cannabis that can thrive in warm climate? Browse our collection of weed seeds that love a lot of sun!

What is the Brownie Scout strain yield?

Brownie Scout is a moderate yielder when grown either indoors our outdoors.

How much THC does Brownie Scout have?

The highest recorded THC content of Brownie Scout is a whopping 38%.

What are the origins of the Brownie Scout strain?

Not so much is written about its exact origin but it is believed to have been created by crossing Platinum Girl Scout Cookies (GSC) with the Great Divide.

You only need practice and learning to grow cannabis like a pro. Let our blog equip you with all the growing info you need.

Have you grown your own Brownie Scout strain? Share your experience with us or leave questions in the comments!