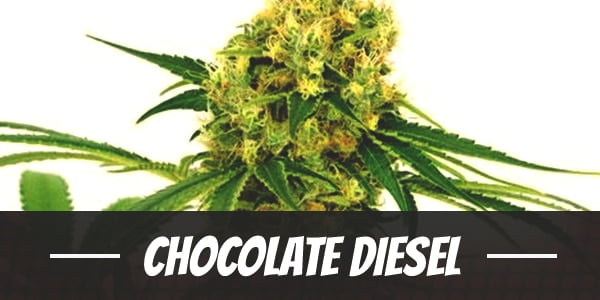 Breeders rarely put out 100% Sativas or Indicas in the marijuana market. This is not surprising though as crossing usually results in a hybrid fortified by the excellent traits of both – regardless if it were perfectly split or leans toward one side of the spectrum. Still, there are many connoisseurs who enjoy the effects of a pure strain which drove a company to create the illustrious Chocolate Diesel.

Chocolate Diesel is an outlier in an industry filled with hybrids. Its THC levels average up to 30% and rarely ever goes under the 25% mark. Through its soaring potency, it supplies users with a unique cerebral high brought about only a pure Sativa like it.

While its creators remain untraceable, many turn to Chocolate Diesel’s parents for credit. From Chocolate Thai, it received its love for long summers as well as its chocolate-flavored smoke with bits of fruit. However, it was Sour Diesel that strengthened the power of its psychoactive compounds.

Though wildly different in terms of taste, Chocolate Diesel and a shot of espresso share one thing in common – they brighten the day of many patrons, albeit in a different way. While the latter is a slow-starter with short-lived effects, the former is a fast-acting Sativa with an energizing cerebral buzz that begins almost immediately after the first puff and lasts for hours.

Ushering in happy memories is a sense of euphoria that leaves users feeling talkative. However, most casual users with work ahead of them prefer to take advantage of the mental clarity by staying focused while completing tasks.

From the temples, a rush of energy surges in the muscles. It wakes tired limbs so users can move like pristine machines in top condition or work continuously without feeling weary.

True to its diesel heritage, Chocolate Diesel has a chemical scent reminiscent of ammonia. However, it releases an overpowering blend of sweet and sour fruits like blueberry.

In the palate, Chocolate Diesel exhibits rich chocolate overtones accentuated by earth. When savored, delectable hints of sweet citrus and blueberries leave a sour aftertaste lingering in the mouth.

As a rule of thumb, marijuana must always be used while in an upbeat disposition since riled emotions usually increase the odds of experiencing anxiety and paranoia. Both are symptoms of a condition called ‘greening out,’ wherein users who consume Chocolate Diesel beyond their tolerance also experience dizziness. In such cases, it is best to pace the bud or avoid consuming it at all.

What is unavoidable, however, is a mild to moderate case of dehydration. It usually manifests in the form a cottonmouth. But, with cannabinoids interfering with the production of moisture in the tear ducts, dry eyes are also a possibility. Neither are a cause for concern due to their mildness. Moreover, both reactions are offset by hydrating with water.

Ask any cannabis enthusiast why they smoke marijuana and, most likely, they will answer ‘stress relief.’ To this end, Chocolate Diesel provides the same effect regardless of whether one uses it for recreation or not. The happy high it induces relieves the mind of negativity and overwhelming dread. Replacing it is a positive outlook that temporarily appeases symptoms of mental health issues like depression or PTSD.

Aside from behavioral benefits, the strain’s combined THC, cannabinoids, and terpenes work well against a variety of physical afflictions. Its soothing body high alleviates pain beginning from the temples.

In the stomach of a patient with an eating disorder like anorexia, it relaxes the sharp sting of muscles rubbing against each other due to the lack of food. Meanwhile, the surge of energy enlivens users and stimulates the appetite. For this reason, one of the best times to use Chocolate Diesel is a few hours before a meal.

Chocolate Diesel has the typical lanky structure of most hybrids classified as Sativa. Its stalks are tall and thin while its branches are too weak to carry the weight of its heavy yields. Moreover, it is susceptible to problems caused by pests and may break off due to strong gusts of wind.

Because of its propensity for the long summers of a Mediterranean climate, Chocolate Diesel is sensitive to the cold. This is not to say it cannot withstand the sudden dips in temperature of higher latitudes. Rather, it may not flower as quickly compared to batches cultivated in equatorial regions. Although, extreme weather can ‘freeze’ the plant to death.

For this reason, many breeders from the northern temperature prefer growing Chocolate Diesel in more predictable environments like greenhouses. In such indoor spaces, they can easily adjust factors like humidity and lighting to bring out its fullest potential. Topping the herb early will keep its height manageable. Applying growing techniques like Low-Stress Training and the Sea of Green method encourages branches to grow laterally.

Chocolate Diesel is not for the impatient. It has a long flowering period that usually lasts up to 12 weeks. However, the yield is remarkable and averages between 12 to 16 ounces of buds per square meter.

In the northern hemisphere, Chocolate Diesel blossoms from late October to the second or third week of November. Even without much sunlight, it produces at least 16 ounces of cured buds per plant.

Have you ever smoked or grown your own Chocolate Diesel? Please let me know what you think about this marijuana strain in the comments below.