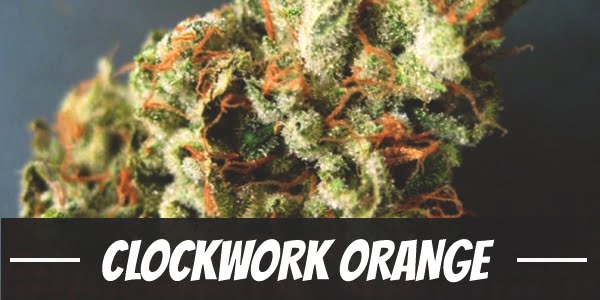 It is an adaptation of a novel of the same name by Anthony Burgess in 1962.

In essence, the movie was disturbing in horrific ways. As such, calling a strain after this film has a negative connotation.

In reality, the Clockwork Orange strain brings on a massive and intense cerebral high.

One thing that needs mentioning early on is that it is not for the faint of heart – literally. In other words, people with a heart condition should NOT use this cannabis hybrid.

Clockwork Orange, known for its notoriety, also has a dubious past. No one can say for sure where it originated from, but the consensus is that its parents are G13 and Black Widow.

Even Riot Seeds, which made its seeds available for a limited time cannot be sure.

Clockwork Orange, with THC content of up to 21%, has an insane potency. Even so, it is not exclusive as many other strains have higher levels. But its effects are unlike any other hybrids out there.

As soon as a few tokes, it comes rushing in delivering an incredible uplifting sensation.

Used in tiny amounts, it makes users feel talkative. One would think that such a strain is desirable for use in parties and social gatherings. After all, it also makes people giggle and laugh.

But once people use this strain to the limits or beyond, then everything changes. Rather than the typical Sativa effects, it now leaves users deep in introspection for hours.

Some people describe the experience as feeling hazy and heavily stoned.

Lost in one’s own thoughts, its effects keep coming and causes users to feel relaxed.

At the same time, the numbing sensation keeps people locked on the couch.

The best way to think of Clockwork Orange if using too much is like a getting slammed by a tsunami.

The strain emits a pungent and dank earthy odor with a spicy scent. Much of its odor appears to be inherited from G13.

Clockwork Orange has a dank earthy smell that is less pronounced in its flavors, but it still has the spicy taste.

At the same time, the herbal and woody tone blends in seamlessly.

As far as negative effects go, there is practically nothing much to be concerned about.

In most cases, people would experience their throats and eyes drying.

But once again, we need to emphasize that Riot Seeds is advising people with heart conditions not to use Clockwork Orange.

The intense cerebral high delivered by the strain leaves many users in deep introspection.

In some ways, it is beneficial when dealing with depression. But rather than wallowing in self-pity, the mental high also induce euphoric thoughts.

As the physical high blends in with the Sativa effects, it also causes to the body to feel relaxed.

In this way, stress is easily managed or eliminated. Because of its numbing body high, it is also able to offer patients suffering from chronic illness relief from pain.

After an hour or so, users of Clockwork Orange are also likely to feel hungry. As such, people who have trouble eating may find this strain beneficial in that way.

Clockwork Orange has a more pronounced Sativa-effects, but as a plant, it grows more like an Indica.

It does not grow too tall, on average, up to only 6-1/2 feet outdoor. In an open environment, it will grow well in a Mediterranean climate.

It is also possible to grow this plant indoor. Growers will have a choice of using hydroponics or soil as a medium.

But because its leaves are massive, Screen of Green training method is not suitable.

Growers should not have a hard time growing this plant. As such, it is also ideal for the beginners and those who have never grown anything before.

It will take time before Clockwork Orange reaches maturity. Often, this would be around 8 to 10 weeks. Afterward, upon reaching maturity, it should be able to produce 3 to 7 ounces per square meter.

Provided that it is placed in an area where there is plenty of sunlight, each plant should produce 7 or more ounces of buds. In most cases, it starts its flowering stage on the last week of October.

Have you ever smoked or grown your own Clockwork Orange? Please let me know what you think about this marijuana strain in the comments below.