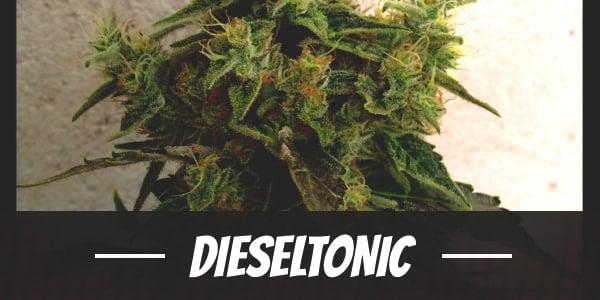 Resin Seeds is a familiar name in the medical cannabis scene. After all, they were the ones who developed CannaTonic. In their quest to keep producing strains that have a high pharmacological value, they took a legendary hybrid and used it to create Dieseltonic.

To know which strains the breeder used, its name is already more than enough for cannabis aficionados to guess.

Considered to be one of the legends, NYC Sour Diesel (bred by Soma Sacred Seeds) has won the Cannabis Cup numerous times. Among its most notable traits are its intense cerebral effects followed by deep relaxation.

Resin Seeds used NYC Sour Diesel to pair it with their very own CannaTonic. As medical users should know, this strain does not boast of high THC. In fact, it almost always does not exceed 6%. However, it comes with some 6% to a mind-boggling 17% CBD. Although it delivers effects that should please recreational users, its benefit to the medical cannabis users is immeasurable.

By crossing NYC Sour Diesel and CannaTonic, Resin Seeds developed a balanced hybrid they named Dieseltonic. Even so, the strain does lean more towards its Sativa heritage. In taking the best traits of the parent strains, one refinement people can expect is in its proficiency in producing high yields.

In many ways, one could say that Dieseltonic is a better version of CannaTonic. It not only maintains a high CBD content, but it also comes with the excellent flavors of NYC Sour Diesel. A testament to the greatness of the strain is in winning the 2013 High Times Cannabis Cup in Amsterdam.

Dieseltonic, by all means, is not a potent strain. In fact, it comes with only 1% THC. Before dismissing it as not having any psychoactive properties, think twice.

Some of the traits that recreational users have come to love are as evident with this strain as many others. It is also fast-acting in that it does not take long before users feel its effects. It begins with an uplifting mental high that enhances the mood. A lot of people using this hybrid tend to feel cheerful. Hence, expect a lot of giggling and laughter.

The gentle cerebral high is also conducive to creativity. Besides clearing the head, it also improves focus. All throughout, the strain also delivers an energetic boost. For this reason, most users feel motivated and stay active.

Once its Indica side kicks in, though, it negates some of the cerebral experience and effects. As users now start to feel relaxed, a little laziness or even lethargy may set in. It does not become overbearing though and cause a couch-lock.

CannaTonic itself has an excellent aroma, but it can be underwhelming. To give it a boost, the influence of NYC Sour Diesel is evident as this strain emits a pungent odor of diesel. It also has a sharp note of citrus.

While its aroma carries over, Dieseltonic has a much more exotic taste. Blending with its mix of fuel are notes of berry and wood. It has a sweet taste as well as a hint of chemical during exhalation. Most people are likely to find its smoke easy and smooth.

If there is one benefit of having little or almost no THC, then it is the lack of adverse reactions. That is not to say there are none. Like all others, Dieseltonic is still a cannabis. Hence, users can expect to experience dry mouth and eyes. Other than these conditions, there are none of the others such as dizziness or having a headache.

Dieseltonic, as one can see, is not a poor choice if the purpose of using cannabis is recreational. But the fact remains that it was bred to have a high pharmacological value. Hence, it is one of the best strains for the medical cannabis users.

Due to the lack of THC despite leaning towards the Sativa side, Dieseltonic does not induce euphoric or psychedelic highs. But the CBD level it has is more than enough to affect the mood and behavior of users. As such, it is able to help people manage stress by uplifting the spirit.

Having a high CBD also means that it can be useful as a pain reliever. It comes with anti-inflammatory properties that help soothe aching bodies. It is also proving to be quite excellent at providing comfort to people with chronic pains.

Dieseltonic produces large and dense colas covered with resin. Growers have a choice of cultivating it indoor or outdoor. It does not matter where because it can thrive in both environments. One trait that makes it easier to tend to is that it is resistant to fungus and powdery mildew.

Dieseltonic has an indoor flowering time of 8 to 9 weeks. Under 600 watts of lighting, the plant can produce 14 to 18 ounces of buds per square meter. A peculiar thing about the strain is that it does not like to be close to the light. Hence, it is best to keep the lighting at least 1 meter away from the top of the plant.

In the garden or the backyard, or even in a large greenhouse, Dieseltonic can reach up to 15 feet tall. Flowering time occurs in October, most likely during the first two weeks. Once ready for harvest, each plant should produce at least 18 ounces of buds or more.

Have you ever smoked or grown your own Dieseltonic? Please let me know what you think about this marijuana strain in the comments below.