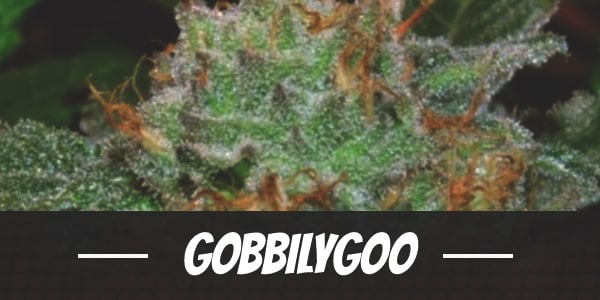 Alphakronik Genes, a leader in the field of medical cannabis, is always keen to listen to any suggestion enthusiasts might have. Among the most successful creations the breeder created is Gobbilygoo, which was developed based on the requests of its best test growers.

Creating Gobbilygoo was not a difficult task. The breeders only took the two strains its test growers recommended – Blue Mango and Gobbstoper. The first has a delicious fruit-flavored terpene profile comprised of berries, mangoes, and grapes. Meanwhile, the second is a part of Alphakronik Genes’ Wonka Series that passes down its quick-flowering genes and impressive trichome production to its offspring.

Its marriage resulted in the Indica-led genetics of Gobbilygoo which features THC levels of 26%. Apart from its potency, among its best traits is its therapeutically valuable tranquilizing high and its ease of growth.

Indica leaning strains are not the type of plants that overwhelms with an intense head high right at the first puff. Instead, it coaxes the mind with a slow rush of euphoria that ultimately leaves one feel happier from within after at least 30 minutes have past. However, users should remember to pace the bud due to its creeping body high.

It is usually best to prepare some snacks before using Gobbilygoo. The mental stimulation is, after all, quite hunger inducing. And, once the body high begins, users may find it difficult to get to the kitchen without bumping into some items in the room.

After about an hour or two, a feeling of supreme relaxation envelops users. It starts from the temples as a light pressure that, as it ebbs down, turns into a soothing sensation that releases tension from each muscle. In all likelihood, those who overconsume the bud will feel completely immobile due to a couchlock.

Deeply relaxed, it is not uncommon for users to feel sleepy during the comedown. This makes it a wonderful bedtime companion but not a strain to be used during the day. Otherwise, it can hamper one’s productivity.

Gobbilygoo has a sweet fragrance similar to that of fresh, crushed blueberries with undertones of grape. Enhancing it are floral notes of lavender which intensify after the buds are crushed or combusted.

Drawn in, Gobbilygoo bursts in the palate with a fruity mix of berries and grapes. Complementing it are herbal hints of lavender. On the exhale, it leaves a floral and earthy aftertaste.

Like other strains, Gobbilygoo has moisture-inhibiting cannabinoids that interfere with the production of saliva. As such, it is not uncommon for users to experience a cottonmouth while using the bud. It may also be accompanied by dryness in the eyes. However, both are mild and easily mitigated by hydrating oneself with a few glasses of water.

Apart from the unavoidable dehydration, Gobbilygoo also disorients users with a temporary dizziness. It is usually the result of using beyond individual tolerance. However, one can easily steer clear of the side effects through pacing and moderation.

As a leader in the field of medical cannabis, Alphakronik Genes produces among the top strains provide a reprieve against various afflictions. Gobbilygoo’s happy high, for example, relieves high levels of stress which can lead to the early onset of depression and other mental health issues if left unattended.

However, as a predominantly Indica herb, Gobbilygoo’s best asset is its soothing high. It relaxes the muscles beginning from the temples and various types of aches and pains all over the body. As the same effect reaches the gastrointestinal tract, it encourages a hearty appetite. For this reason, it is a great medicinal companion for patients undergoing chemotherapy.

Mentally and physically relaxing, Gobbilygoo not only enhances the quantity of sleep but also the quality of sleep. Not only that, it is an effective sleep aid for insomnia and other related sleeping disorders.

Gobbilygoo is not a tall plant. It is short like many other Indica dominant buds and absolutely sturdy. Not only that, it has high resistance against moisture-related problems like mold and mildew. And, though it may prefer a warm climate, it thrives in cold temperatures or damp environment regardless.

Among Gobbilygoo’s features is its heavy trichome production and large yields. Its potency is evident in its buds which are laden with sparkling, sugary powder that adds weight to its colas. For this reason, aspiring growers may need to stake its stalks and tie its branches especially during the flowering stage where it can possibly break off.

To bring out its full potential, its breeders advise growers to cultivate the plant in nitrogen-rich soil. However, those using a hydroponics system should test for base notes of up to 12000ppm at full tilt.

At the moment, Alphakronik Genes sells Gobbilygoo in regular form. As such, it is important for growers to utilize pre-germination techniques such as soaking to increase the likelihood of growing female plants. Applying Low-Stress Training techniques will also keep it from turning into hermaphrodites.

Gobbilygoo has an indoor flowering period of 7 to 9 weeks. It yields an average of 10 to 12 ounces of buds per square meter but produces even more under the expert care of a seasoned grower. The plant also responds well to the Sea of Green method.

Gobbilygoo is a great outdoor performer that produces at least 12 ounces of buds per plant after blossoming from the last week of September to the second or third week of October.

Have you ever smoked or grown your own Gobbilygoo? Please let me know what you think about this marijuana strain in the comments below.