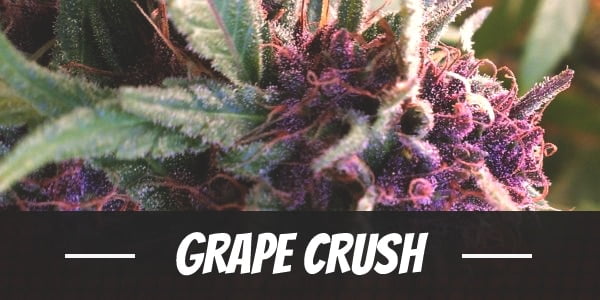 Stress is a part of life. It is only that some people experience more than others. As the pressure mounts, it can become crushing. But there is a way to turn things around. Instead of succumbing to the hassles of life, one marijuana strain can crush the stress.

Grape Crush, aptly named, does that and more. It is known for its sweet grape fragrance and flavors as well as its average potency. It is the perfect hybrid for people looking for a relaxing cannabis that is not too intense nor overwhelming. Still, it contains enough THC to deliver unforgettable experiences.

Grape Crush is a creation of DJ Short. According to many sources, the breeder intended for this plant to grow outdoor. As for its lineage, all we know is that it came from Blueberry. We think it may be phenotypes of the parent strains crossed with one another.

At any rate, coming from a parent that is widely recognized as one of the best strains in the world, we can expect the same from Grape Crush. Incidentally, it is also called by a few variations in its name – Grape Krush, Grapecrush, and Grapekrush).

In the world of cannabis, it appears as if there is a decades-old arms race going on. Breeders have been designing new strains that contains the highest amounts of THC. In other words, they are creating potent strains that can be overwhelming. Such is a trait that many recreational users love. Keep in mind, too, that such strains are also helpful for patients with chronic illnesses.

So, going against the practice of breeding plants armed to the teeth, Grape Crush is actually one that has average potency. While many others deliver an intense high, this one is much easier and smooth. In fact, its effects are not immediately felt. Instead, it builds up slowly and will take a few minutes before it starts making its presence felt. For some users, they may not even realize that it is already working its way to the head.

Generally, most users tend to feel their heads clearing, and along with it, comes a heightened sense and better ability to focus. Soon, an uplifting sensation fills the mind leaving users happy and euphoric. Furthermore, it also inspires people to have creative thoughts. It is these traits that make Grape Crush ideal for daytime use with a group of friends.

Meanwhile, its more dominant Indica side works slowly down to the body. It will not take long before its users feel completely relaxed but not to the point of feeling lazy or lethargic as many others do.

Grape Crush is an easy to use strain and makes for an ideal marijuana for beginners.

Coming from Blueberry, its odor is like spider’s web that entraps people. It emits a pungent and sweet smell of berries and grapes with a strong chemical smell.

Not only is it great smelling, but it is also a delight to the throat and mouth. When combusted and inhaled, its smooth smoke is rich with the taste of citrus and berries.

Even if Grape Crush has only an average potency, it does have some unwanted reactions. For instance, some people may have a mild headache. At the same time, they may also feel their throats and eyes drying. If these symptoms occur, they are temporary and should be gone in an hour or two.

Such reactions are also often a result of using a little bit too much. Hence, even if it is not the most potent strain in the world, users should also not underestimate it. One other concern that we should also mention, by the way, is that during its onset, a few people may feel a mild and temporary dizziness.

As alluded to, Grape Crush can squash stress. It is because of the combined cerebral and body effects it delivers. In some ways, that same trait makes it also helpful in helping people deal with depression.

The hybrid also comes with a mild sedative-like property. As such, it can also be used by people dealing with mild chronic pains and aches, as well as muscle spasms.

Finally, it is natural for many people to feel sleepy as the effects of Grape Crush fade. In this way, it can also be helpful to people who need help sleeping.

DJ Short intended Grape Crush to grow outdoor. That is not to say that it cannot grow indoor. In fact, it grows well even using hydroponics. However, if growers want to prioritize a more pronounced flavor, then they should consider using soil as a medium. It is not difficult to cultivate the plant, but some experiences may come in handy.

Coming from the lineage of Blueberry, it also inherited a particular trait. By moving it to a cooler location just before the flowering phase, it is possible to induce a chemical reaction in which some purple and blue hues may appear. It does not affect the flavors or the potency, but it does look much nicer and more enticing.

Grape Crush is ready for the flowering stage in 8 to 9 weeks. After it matures, each square meter of the plant can produce 12 to 14 ounces of buds.

As intended, Grape Crush tends to have better flavors, and it starts to flower before the start of October. Growers can harvest around 18 ounces or more after a few more weeks.

Have you ever smoked or grown your own Grape Crush? Please let me know what you think about this marijuana strain in the comments below.