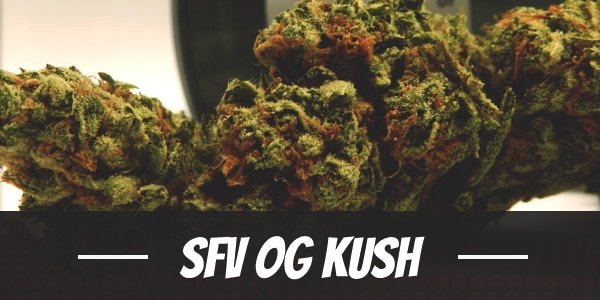 The best thing about the different cannabis varieties in the market today is the fact that some of them are bred to be the better versions of their parent strains or at least acquire their best qualities.

Having said that, strains can also differ when it comes to their most notable characteristics. To wit, there are those that appeal more to recreational users with their astounding THC levels while others are deemed more useful for patients suffering from various health issues.

Apparently, these are all made possible by the breeders who meticulously pick out the best varieties to breed to develop a new one that has most of, if not all, the superior qualities that users are looking for.

To wit, below is a collection of information about one particular strain called the SFV OG Kush which can easily be considered as a spitting image of its parent strains. In fact, it is often confused with one of its parents due to the similarities of their name and characteristics.

SVF is short for San Fernando Valley–the place where the strain was fist popularized. The Cali Connection bred the SVF OG Kush that originally started out as a phenotype of the original SFV OG. They later decided to cross it with the Afghani strain to further improve the strain’s overall quality.

SVF OG Kush is recognized for its properties that closely resemble that of its parent strains. For one, it is an Indica-dominant hybrid that boasts of THC levels reaching as high as 25%. Apparently, impressive potency is a common characteristic of the OG lineage.

At the onset, users may experience a slight euphoria that leaves them feeling happy and a bit spacey. This is mostly due to the strain’s 10% Sativa content, but when this mild head buzz settles, the powerful Indica effects of SVF OG Kush instantly take over.

The physical high is usually quite heavy for most users, but still very calming and relaxing. The buzz starts in the lower spine and later spreads throughout the user’s entire body. By then, the user may feel weighed down and sleepy which can be the manifestation of the sedative properties of the strain.

The classic OG scent is usually quite strong and enticing. That being said, users can expect the SVF OG Kush to have the same distinct aroma of sweet yet skunky scents of earth and pine that actually reflects its lineage

The flavors of SVF OG Kush is just as pleasant as its aroma. It has a delicious combination of the sweet and citrus flavors of lemon and lime with hints of pungent earth that becomes more prominent upon exhale.

Every cannabis user knows that marijuana may cause some adverse reactions that can sometimes be as mild as a simple headache or as severe as paranoia and anxiety.

However, in the case of SFV OG Kush, the most common side-effect experienced among users is dry mouth. Although that is not necessarily a very alarming case, users must consider the fact that the strain may also cause dizziness. This can also be accompanied by signs of dry eyes and perhaps mild headaches.

Due to the potent Indica effects of the SFV OG Kush, it has become one of the top choices for patients suffering from certain health conditions that benefit mostly from its relaxing and sedating effects.

To wit, the strain’s uplifting high makes it an effective stress reliever alternative for patients suffering from chronic stress or anxiety. It may also work for patients dealing with mild depression.

The relaxing and sedative-like effect of the strain, on the other hand, can effectively relieve chronic pain caused by various health conditions like muscle spasms and inflammation. This can further help induce sleepiness among insomniacs and may even stimulate cravings for those with poor appetite.

Some growers say that cultivating SFV OG Kush is quite a challenge. However, others would argue that the strain is easy to grow. At the same time, they cannot seem to agree on the ideal nutrition intake required for a healthy and prosperous harvest.

Nonetheless, prospective growers can choose to consider either opinion. Anyhow, their claims are also accompanied by some suggestions that are also worth noting. These include using RO water and maintaining a pH between 6 and 6.5. Now, to achieve a maximum yield, some growers would suggest allowing the plants to vegetate for at least 20 days and letting them flower for ten weeks.

Supper-cropping is also advised to allow the buds in the lower branches to thrive better. The strain may also be cultivated either indoors or outdoors in a soil medium or by using the SCROG method.

SFV OG Kush takes about 55 to 65 days to flower indoors. This type of cultivation can produce a yield of 16 to 20 ounces per square meter.

As for the strain’s outdoor cultivation, growers should expect the buds to be ready for harvest by late September to mid-October. The average outdoor yield is 20 ounces or more per plant.

What is the SFV OG Kush strain yield?

How much THC does SFV OG Kush have?

What are the origins of the SFV OG Kush strain?

SFV OG Kush was created from a mix between SFV OG and Afghani.

Have you ever smoked or grown your own SFV OG Kush? Please let me know what you think about this marijuana strain in the comments below.