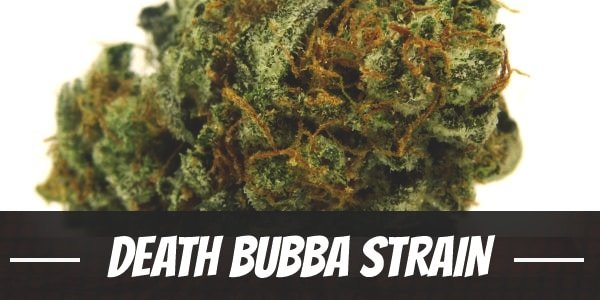 Once in a while, marijuana users will try out a new strain just because of how its called.

Some names (including Death Bubba Strain) are not only intriguing but could also be indicative of its attributes.

It can give people an idea of where it came from or where and how it takes users on a psychedelic journey.

Is a strain named Death Bubba worth a try?

Before anyone thinks of this strain as one to cause untimely demise, the name is an influence of its parents – Death Star and Bubba Kush.

Bred by Sea and Sky in Vancouver, these two genetic bases are mostly Indica hybrids that delivers a profound body high.

Boasting of a staggering 22% to 27% THC, Death Bubba is one extremely potent strain that has the potential to knock out users.

During the onset, it begins with a euphoric rush to the head that helps clear the mind and lightens the mood. It also makes users feel energized and motivated to be active. Feeling upbeat and cheerful may not last long though once the Indica traits weave its magic.

From a mild, tingling sensation, soon the limbs feel a tad but numb as the body high intensifies. It helps calm the nerves and bring about an uplifting feeling. Gradually, too, the mind turns spacey as users fall into deep introspection.

Active and energized during the early stage, Death Bubba unleashes its sedating body high to put users in complete relaxation. Lost in own thoughts, users eventually drift off to sleep.

The pungent and dank smell of Death Bubba can only add to the allure of its notorious-sounding name. It does come with a surprisingly pleasing musky and earthy blend with a note of pine.

Often, marijuana strains taste like its fragrance. Death Bubba deviates a little as its profile has a more pronounced flavor of pine and lemon along with a sweet aftertaste.

The intensity with which it can put people in bliss is a benefit sought after by recreational and medical users. Still, staying true to its marijuana nature, it can induce dry mouth and dry eyes. At times, it might also cause some people to feel dizzy.

And, if one were to take an extra hit or two than what is already adequate, it can become overbearing. In this case, it might make some users feel more anxious or paranoid.

Once the full effects of Death Bubba take over the mind and the body, there is no way to go for users but to sit back and relax. In time, drowsiness sets in and, lost in introspection, many users only wake up the next day refreshed and only then realized they have fallen asleep.

For medical patients undergoing treatments, and insomniacs, its ability to provide quality sleep is its most sought-after therapeutic benefit.

Psychologically, the way this strain uplifts the spirit and bring about a full-bodied relaxation makes it useful in wiping out stress. Consequently, it aids people in dealing with .

Death Bubba is a finicky plant. It may be resilient, but it also needs a lot of attention. For this reason, beginners in cultivating plants may want to reconsider and try out another strain.

Due to its Indica heritage, it does not grow too tall. Growers can plant it indoors or outdoors. Between the two environments, the better choice would be inside the house. One reason is its pungent odor, and using a grow tent, installing an odor-control filter is a snap and solves the issue of privacy.

Typically, the flowering period takes 8 to 9 weeks. Hydroponics can cut it short by at least a week. However, it is still best to let it continue to develop and produce more THC before harvesting. Each square meter of the plant can produce some 10 to 12 ounces of flowers.

The best environment for Death Bubba is an area where it can receive plenty of sunshine. Under expert hands, each plant can produce up to 12 ounces of buds during harvest in October.

What is the Death Bubba strain yield?

How much THC does Death Bubba have?

What are the origins of the Death Bubba strain?

Death Bubba was created from a cross between the Death Star and Bubba Kush strains.

Have you ever smoked or grown your own Death Bubba? Please let me know what you think about this marijuana strain in the comments below.