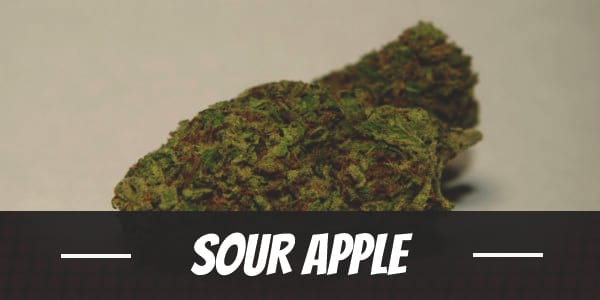 This strain takes its name from one of its parent and the distinct sour taste, but make no mistake about it. Sour Apple has an insane potency that not only could leave on sitting on the couch for a while. It could also take the smoker on a psychedelic journey. Used in moderation, though, this weed can enhance creative thinking.

Surprisingly, even with a rather small Sativa side, its cerebral effects manifest itself well before the physical body high overwhelms the smoker. Sour Apple is a great strain for use on a lazy day, or at the end of a rough day with nothing else to do.

An apple a day keeps the doctor away, so they say. In the case of Sour Apple, one of its more popular use is relief from stress. To a smaller extent, medical cannabis users may also find the strain helpful in dealing with pain.

As alluded to, Sour Apple took its name from one of its parents, the popular Sour Diesel. The breeder, Top Shelf Seed, crossed it with Purple Kush and the result is a much more potent hybrid.

In the market, there is also another variant of this weed, one that is a cross between Sour Diesel and Cinderella 99.

In some ways, the best word to describe the effects of Sour Apple is vicious. A lot of cannabis users who had no idea how powerful this strain is get caught off guard with the instantaneous and intense cerebral high. Of course, the effects of this strain is not to be taken in a negative way. Rather, it uplifts one’s mood and makes the smoker feel cheerful and happy.

In some cases, smokers could also feel euphoric and it smoking a little too much, might find themselves somewhere in space. Having said that, most users experience a heightened creative thinking.

But Sour Apple is an Indica-dominant strain. As such, it starts creeping in on the body. So, while the creative juices are flowing in the mind, the body starts to slow down. If you need to stay in one place and finish a task, this hybrid makes you do just that.

Let’s get real here. Of course, this weed was not named sour because of how it smells. As a matter of fact, Sour Apple is one weed that actually has a great odor. The smell of fuel is evident, but the fruity smells blend in perfectly to create a pleasant scent.

Its odor somewhat carries over to its taste, but with a more pronounced sourness. Still, the lemony aftertaste makes it quite a treat for users.

As someone who is quite familiar with cannabis, a reasonable assumption is that one of the top negative reactions to using this strain would be dry mouth or eyes. But no, that is not what is to be expected with using Sour Apple.

It is likely a result of the intense high that at some point, there are people who experience a headache. One thing that can be done to avoid that is to stay hydrated.

As mentioned, one of the best use of Sour Apple is as an aid to reduce stress levels. Because of that, even people suffering from depression should benefit, for obvious reasons. The complete body relaxation one feels could also be beneficial in reducing the symptoms of mild pains.

After spending some time in a complete state of relaxation, it follows that a smoker is bound to feel sleepy. And so, with that, Sour Apple could also be used by insomniacs to help them fall asleep.

Growing Sour Apple is not that hard, even for beginners. What growers should know is that if planted outdoor, it could grow up to more than 10 feet. We are aware that growing cannabis is illegal in many places. As such, it probably is not a good idea to show the neighbors what you are up to.

A better way to cultivate Sour Apple is through hydroponics indoor. Sure, it grows on soil too, but hydroponics makes it grow faster. Experienced growers would be pleased to know that Sour Apple actually thrives well when using both the Sea of Green (SOG) and Screen of Green (ScrOG) methods.

Grown perfectly in a suitable indoor garden, Sour Apple takes the sourness our of a grower’s face by the time it is harvested. In around 7 to 9 weeks, this plant gives a huge yield of 18 ounces or more per square meter.

Lucky for growers who live in states or areas where growing cannabis is allowed. As such, after cultivating for several weeks and come October, a yield of 24 ounces or more per plant should be more than enough to make one drool.

Have you ever smoked or grown your own Sour Apple? Please let me know what you think about this marijuana strain in the comments below.