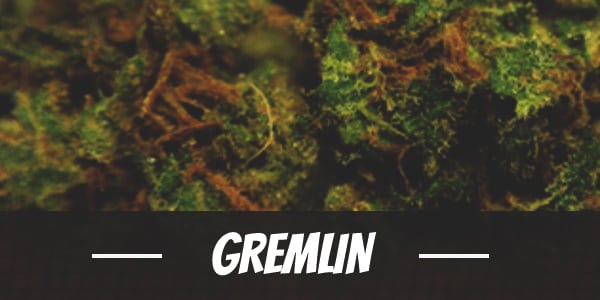 It is rare for Gremlins to be allowed into the home. After all, the mischievous creatures constantly tamper with machinery either out of curiosity or boredom. Moreover, a simple glance is enough to warm people of its menacing, up-to-no good plans.

Thankfully, the strain inspired by it is not at all troublesome. Rather than annoying users, it induces a soothing head-to-toe buzz that relaxes the body through and through. If anything, the only aspect that Gremlin has in common with the folkloric creature is its power. With a potent THC of up to 20%, it can be quite devious when used excessively.

Though its breeders remain a mystery, the story of its heritage is passed on forever. From King Louis XIII, it garnered its royal scent of refreshing pine and wet soil. Meanwhile, its cookie dough aroma is from the rare Mogwai which is a child of the baked good ’09 Cookies.

Gremlin’s ocean grown genetics are strongly represented in the high that it delivers. Like most OG strains, it introduces powerful euphoria that reflects itself in the mind and the body. Though such an effect has garnered it a name among recreational enthusiasts, it remains therapeutically valuable to patients in the medical marijuana community.

Gremlin performs like a true hybrid. It has an equal mix of mental and physical effects that suit almost any time of the day when dosed appropriately. The onset is much like a Sativa’s in that it begins almost immediately after the first few puffs.

Its high usually starts with an uplifting buzz that wakes the mind from its stupor. Subtle at first, it later develops into a rush of euphoria as more hits are taken. In all likelihood, using too much of the strain at the onset will overstimulate the mind and end in a feeling of paranoia.

Using it within limits, though, encourages a sense of well-being that is immediately obvious in the sudden behavioral change. Users become more upbeat, smiling, and generally carefree as a calmer mindset takes hold.

Without warning, a sense of relaxation introduces itself after a few hours have passed. It soothes each muscle until one feel fully relieved mentally and physically. Depending on the dosage, users will either fall into a deeply refreshing sleep or feel aroused at the freedom from inhibition.

Being such a potent strain, it is not at all surprising for Gremlin to be pungent. It take after its ’09 Cookies grandparent with its sweet cookie dough scent accentuated by hints of citrus. However, the earthy influence of the king shines through with notes of earth that fill the room once the buds are crushed or combusted.

Drawn in, Gremlin floods the palate with the sweet and fruity taste of citrus. Overtones of cookie dough make the bud seem like a baked treat while undertones of wet soil bring out its freshness.

Used excessively, Gremlin can scare users with a subtle feeling of paranoia. It can be quite disorienting as it heightens sensation as well as amplify sounds and sights. Although the chances are slim, it is still best to use the bud with caution.

Most of the time, however, Gremlin only dries the eyes and the mouth. This particular side effect is often ignored by users for its mildness. Moreover, it tends to go away after a few hours. Should symptoms persist, downing a few glasses of water will ease the irritation.

Stress is frequently mistaken as a minor worker’s woe. But, in chronic levels, it can undo the lives people have built up in seconds. Not only that, it can lead to the early onset of depression and leave one with feeling hopeless about the future. As such, it is important to release the pressure from stressors.

To that end, Gremlin works perfectly. It temporarily brings users to an imaginary utopia away from stress-causing problems. By appeasing the overwhelming dread, it also manages symptoms of depression such as overwhelming anxiety or the looming dread over events in life.

In large concentrations, THC becomes potent enough to relieve pain. Along with the little CBD it has, Gremlin induces a cathartic release from the aches and pains that physical afflictions bring. Not only that, it soothes each muscle to prevent it from suddenly contracting and causing pain.

It is not uncommon for users to feel drowsy as the effects wane off. After all, the liberation from mental and physical inhibition is a great sleeping aid that not only enhances the quality of sleep but the quantity as well.

As an evenly-split hybrid, Gremling is relatively tall. It can fit in most growing spaces but will have to be topped early in limited areas. Not only that, it is also quite resistant to a variety of issues including sudden fluctuations in temperature.

While it is not easily swayed, its branches can break off due to the weight of its heavy buds. And, for this reason, stakes are needed for additional support especially when growing outdoors where strong gusts of wind can add pressure.

To be safe, it is best to germinate the plant indoors and keep it there until it nears its flowering phase. By then, both branches and stalks will have begun to harden, helping it withstand any untoward environmental factors. Still, growers may choose to grow the plant indoors but it will need to be trimmed down to evenly aerate its compact structure.

Indoors, Gremlin blossoms around 8 to 10 weeks from the start of the flowering period. It typically produces 12 to 14 ounces of buds per square meter but will yield even more at the hands of an expert.

Garden grown Gremlin flowers in October, usually between the first to the third week. Under the sun, it yields at least 14 ounces of buds per plant.

Have you ever smoked or grown your own Gremlin? Please let me know what you think about this marijuana strain in the comments below.