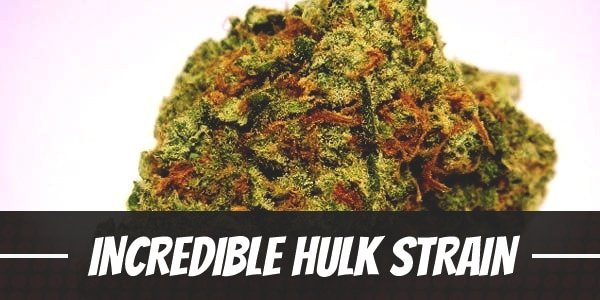 The Incredible Hulk is one of the most memorable characters in the Marvel Comics. Recognized for his brute strength, the green-skinned hero saves people around him as he fights off crime in an effort to do good in spite of his anger issues. Needless to say, the man has a gentle side to him that ultimately wins the hearts of people all over the world.

An ode to the green giant, an anonymous breeder crafted a namesake strain that captures the essence of the real Bruce Banner – a creative scientist who enjoys the company of people he loves. It induces an energizing buzz that stirs the mind with ideas and a happiness that radiates after crashing out tasks from a to-do list.

Its parents are the legendary Sativas Green Crack and Jack Herer. Famed worldwide for its spiritually uplifting high, the former keeps users invigorated and motivated throughout the day. Meanwhile, the latter is a big ball of energy named after the famous activist who believed in pushing medicinal studies on cannabis.

High expectations are placed on the Incredible Hulk’s THC levels. After all, it comes from two potent strains that have gained worldwide fame. Not to disappoint, the Sativa-dominant herb quickly goes between an timid 14% to a powerful 21% THC. Indeed, the ‘incredible’ in its moniker is not for naught.

Incredible Hulk, like the hero itself, is a straightforward strain with effects that start almost immediately after the first two to three puffs. A rush of energy surges through the muscles and reinvigorates the body through and through.

As it persists, users radiate with confidence. Smiles shine brighter as a happiness from within emanates on the outside. The upbeat mood also encourages people, especially shy introverts, to share stories while chatting away with friends or engaging at parties.

Over time, a light pressure manifests and slowly builds in intensity. It indicates the start of Incredible Hulk’s Indica effects. Before long, it completely wraps the physique in deep relaxation although not in the incapacitating manner that other strains induce.

Its energizing effects make it great for daytime use, particularly as a mid-morning treat in place of coffee or an afternoon boost that energizes users as the day ends. So long, of course, it is used in moderation. Otherwise, it can be quite overwhelming.

The aromatic blend of earthy citrus is immediately noticeable once a bag of Incredible Hulk. It emanates a commanding fragrance of skunk along with the subtle fruity scent of blueberries mixed with dried bits of pineapples.

Drawn in, the unlikely but delicious flavors of blueberry and pineapple burst in the palate. It is accentuated by bare hints of herbs, pine, and the strong taste of wet soil. On the exhale, an aftertaste of skunk lingers in the mouth even as the last puff of smoke escapes from the mouth.

A strong hybrid like Incredible Hulk will green users out when used beyond limits. It temporarily immobilizes users with a disorienting dizziness while inducing a subtle feeling of paranoia. In some cases, it is accompanied by a headache that potentially worsens the side effect. Most of the time, however, users only experience dryness in the eyes and in the mouth as cannabinoids interfere with the production of moisture. Still, using the bud with caution is the best way to go in avoiding the dreaded reactions.

In spite of its intimidating build, Incredible Hulk is one that uses its potent powers for good. It jumps in to save a number of people from suffering a diminished quality of life as a side effect of various medical complications that affect the mind and the body.

For example, the strain’s stimulating head high inspires a calming euphoria that lowers stress levels. At the same time, it shines a ray of hope against a backdrop of dark thoughts. Acting as an anti-depressant, it manages symptoms of mental health issues such as PTSD, depression, and anxiety albeit temporarily.

Meanwhile, its high THC levels eases various types of aches and pains beginning from the temples. It pacifies inflammation by reducing redness and swelling. And, in reinvigorating the body, it also gets rid of fatigue.

Incredible Hulk is a little finicky to cultivate indoors. Its propensity to grow tall creates problems for growers with limited space. As such, it will need to be topped early otherwise it will grow aggressively big and become unmanageable. Apart from that, growers will need to mimic the semi-humid climate of the Mediterranean.

This is not to say the plant will not grow well in the northern hemisphere, where the days are short and the winds are cool. In fact, it is quite resilient against the colder weather and the lack of sunlight. However, it will flower quite late – usually blooming into the early weeks of November compared to its Indica counterparts depending on the amount of light and nutrients it absorbs. Moreover, the extended flowering period assures users of a few extra ounces of yields.

Planting the herb in soil will bring out richer, fuller flavors but will be much more exposed to bugs in the soil or to a bit of chemicals. As such, users may opt to cultivate the strain in soilless mediums such as a hydroponics setup to produce cleaner buds. Regardless, it will produce fluffy, elongated dark green buds that are accentuated by a frosted coat of trichomes.

Applying the Screen of Green, along with other Low-Stress Training methods, will help increase yields. Meanwhile, complementing it with High-Stress Training techniques such as super cropping will encourage even better trichome production.

Patience is an essential trait for growers of Incredible Hulk. It is a late bloomer, with a flowering time usually ranging from 10 to 12 weeks. But, as soon as the wait is over, it rewards a super yield of 12 to 16 ounces of buds per square meter.

In the northern hemisphere, the flowering period usually ranges from the last week of October to the middle of November. Though it prefers warm weather, it remains a high yielder with each plant producing at least 16 ounces of buds.

What is the Incredible Hulk strain yield?

Incredible Hulk yields 12 to 16 ounces per square meter indoors and 16 ounces or more per plant outdoors.

How much THC does Incredible Hulk have?

What are the origins of the Incredible Hulk strain?

Incredible Hulk was created from a mix between Jack Herer and Green Crack.

Have you ever smoked or grown your own Incredible Hulk? Please let me know what you think about this marijuana strain in the comments below.