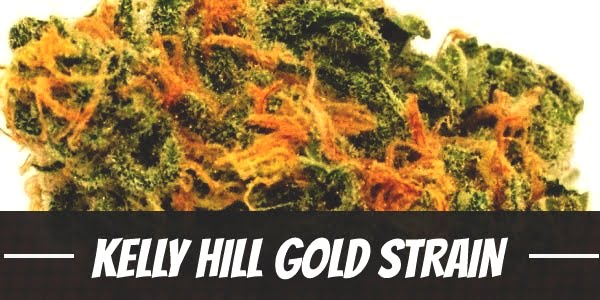 Kelly Hill Gold is among the best products created by Joseph Arthur Botanicals. It is an Indica-balanced strain with THC levels of 24% to 25%. When drawn in, it produces an enticing head to toe high that is great for recreational use. It not only boosts confidence but also offers new perspectives. Its terpene profile mimics that of coffee too, making it a great bowl to have with friends.

Of course, nothing short is expected from Kelly Hill Gold. It marries Acapulco Gold and Chemdawg 4 into the perfect Sativa and Indica blend. The former influenced its head high while it gained its tranquilizing bodily effects from the latter.

One of Kelly Hill Gold’s greatest qualities is its great growing profile. It has the sturdy yet compact structure of its Chemdawg 4 parent and flowers quite early too. In addition to that, it has impressive trichome production.

Kelly Hill Gold is a spectacular recreational strain. Although it is largely Indica-leaning, it delivers an energizing high right at the onset. One should know that it is a slow-starter. Thus, pacing is highly recommended to ensure that the effects remain pleasant throughout the high.

During the onset, it delivers a rush of euphoria that inspires a change in behavior. It leaves users feeling upbeat as it clears the mind of negativity. Replacing it are happy memories and stimulating thoughts that improve moods. It also boosts confidence. Thus, it is not uncommon for one to become more talkative than usual.

Its bodily effects are not at all heavy-hitting. Instead, it complements the vigorous buzz during the initial onset. Surging through the muscles is a rush of energy that rids the body of tiredness. Like a well-oiled machine, it allows users to move around with ease and perform tasks.

For some users, the mental and physical relaxation can be an arousing experience. Its natural aphrodisiac qualities entice users for a fun time ahead, especially when it is used with a loved one.

Kelly Hill Gold has a pungent overtone of wet soil. The presence of herbs is detectable along with hints of spicy pepper. Enhancing it is the wonderful scent of coffee which intensifies once the buds are broken apart or combusted.

Kelly Hill Gold has strong flavors of earth and herbs. It is spicy too, reminiscent of the taste of grounded pepper. On the exhale, it leaves an aftertaste of coffee that washes over the mouth that energizes users.

Users often experience symptoms of dehydration, such as dry eyes and cottonmouth, after smoking marijuana. It is a common reaction resulting from cannabinoids interfering with the body’s natural ability to produce or retain moisture. Experienced users usually ignore it due to mildness but, if symptoms persist, one may down a few glasses of water throughout the day.

Joseph Arthur Botanicals is one of the best producers of recreational cannabis. However, its buds also provide patients relief against a myriad of maladies through the same cannabinoids that deliver its head-to-toe high.

Stress relief is one of the best uses of Kelly Hill Gold. It has a mood-uplifting onset that delivers a calming euphoria. As it persists, it stabilizes turbulent emotions or overwhelming dread by increasing the production of happy hormones. Because of this, it is also a source of reprieve among long-sufferers of mental health issues like depression, anxiety, or PTSD.

Through its high levels of THC, Kelly Hill Gold also reduces aches and pains. It is a natural analgesic that eases physical symptoms of health issues like chronic pain or cramps. Its anti-inflammatory properties, on the other hand, reduce redness and swelling. Usually, a positive side effect of this is reduced spasms as it keeps the muscles from contracting uncontrollably.

Kelly Hill Gold is an Indica-dominant strain that exhibits both Indica and Sativa qualities. It is relatively tall, growing up to 7 feet, and is very branchy. Its thick frame makes it a sturdy plant as well. Because of this, it is great strain to grow outdoors in the northern hemisphere.

Apart from having a natural propensity for cool weather, it can withstand various growing factors like strong breezes and light rains. However, it wll need protection against the snow which hcan kill it overnight. A temporary enclosing is usually enough to keep it warm and safe.

Indoors, its relatively tall height will need to be topped early to stay short. Pruning will also improve light and air circulation in the lower nodes to keep moisture from forming into mold or mildew. Both the Sea and Screen of Green work best with the Kelly Hill Gold. The latter requires installing a screen above the current canopy then weaving the branches through the net to ensure even nutrient distribution. It creates more budding sites that produce a higher yield. Meanwhile, the latter maximizes small spaces. Pairing either with a hydroponics setup will deliver nutrients directly to the roots, ensuring a faster flowering period as well as bigger turnout. Soil, however, will encourage better trichome production.

After 7 to 9 weeks of flowering, Kelly Hill Gold yields between 10 to 12 ounces of buds per square meter. Yields can be significantly improved by applying growing techniques like the Sea of Green method.

Kelly Hill Gold fully matures between the last week of September to the middle of October. Growers can expect the batch to produce at least 12 ounces of buds per plant.

Have you ever smoked or grown your own Kelly Hill Gold ? Please let me know what you think about this marijuana strain in the comments below.