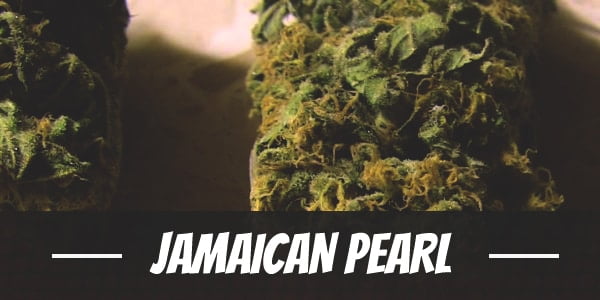 Jamaica is not only known for music and fun, but it is also where one of the best pure landrace Sativa strains were found. From this incredible cannabis, a new hybrid – Jamaican Pearl – was created. When it comes to a strain that can induce euphoria, this is it.

One of the most reputable seed banks in Europe, Sensi Seeds, used a couple of great strains to design the Jamaican Pearl. Its lineage traces all the way back to a Sativa plant in Jamaica, one that is known for its incredible uplifting cerebral effects.

Known for its Sativa qualities, one of the parents is Early Pearl, also created by the same breeder. Using it to cross with another of their creations, Marley’s Collie, the result is a hybrid that not only grows in Caribbean like climate but also in the harsher European environment.

More than it being a marijuana plant that Europeans can grow, the Jamaican Pearl also comes with incredible mental effects.

Most marijuana strains come with mood-altering properties. In fact, it is one of the top reasons for its medical and recreational use. As such, breeders will always want to bring out the best traits when designing new hybrids. In the case of the Jamaican Pearl, what it does best is to induce the feeling of euphoria.

As expected, once the strong cerebral effects hit the users, the euphoric sensation wraps itself around the whole person. In other words, no matter how one feels, a few tokes of the Jamaican Pearl and all will be good.

Feeling uplifted and in an incredibly good mood, users also tend to have a clearer mind with enhanced creativity. It means that they can think of ideas like they never did before, but not to the point that they find themselves locked in introspection. Further adding to the appeal of this strain is that the creative juice is charged by an increase in energy levels. As such, users are likely to do things better and more efficiently.

What it means for most people is that the Jamaican Pearl is perfect for daytime use with no danger of becoming a hindrance. Keep in mind, though, that use it a little too much, and it can become overbearing as is the case with all other cannabis hybrids.

Although mild, it does have the ability to put people in a relaxed mood as well. It is unlike the kind that is felt when using heavy Indica strains, but more like a subtle kind of relaxation where it is induced primarily by the uplifted mood.

Silver Pearl can have an insane amount of THC. As such, it is one of the most potent cannabis worldwide. Read our full review!

Jamaican Pearl comes with an odor that is to die for. It is so pleasant that smelling it already makes it irresistible to light up. Indeed, its sweet berry scent is as appealing as the rest of the cannabis renowned for its aroma.

Sniffing the buds can increase the anticipation one may have with regards to its tastes. Users are not disappointed with the sweet fruity taste that is evident and pronounced during inhalation and exhalation.

On rare occasions, some people may feel a little more paranoid after using the Jamaican Pearl. If one is going through anxiety issues, perhaps this is not a good strain to use. It is better to look for other strains that are gentler and do not cause paranoia.

Jamaican Pearl is potent, and as such, it can also cause some people to feel dizzy. It is especially more likely to occur during its onset as the cerebral effects rush into the head. Fear not, though, as it is only temporary.

Of course, cannabis has its medical use. It is what the activists say so, and what they tried to prove as they campaign for its legal cultivation and use. As for the Jamaican Pearl, what it does extremely well is to wage war against stress. It does so by changing the mood from sour to that of extreme happiness or euphoria.

Although there are other medical uses, they are anecdotal and will likely be effective in mild cases. For instance, mild pains and aches.

Growing the Jamaican Pearl would have been impossible if not for the deliberate act of making it so. Sensi Seeds wanted a great strain that can grow in European summers, so they created one. And what an excellent job they did in bringing this hybrid to life.

Because of that, growers can grow it in outdoor gardens or in the comforts of their homes.

The plant grows like a typical Sativa and will need at least eight weeks before growers can start the flowering phase. Compared to Indica plants, it may take longer to grow, but the reward comes in the form of 14 to 16 ounces of buds per square meter.

Jamaican Pearl grows well during the summer season in Europe. Keep in mind that it will not tolerate frost, like most plants, anyway. However, once the temperature turns a little cooler, it will still thrive. It starts its flowering period sometime between September and October. Once it reaches full maturity and bloom, growers can get 21 to 28 ounces of buds per plant.

Have you ever smoked or grown your own Jamaican Pearl? Please let me know what you think about this marijuana strain in the comments below.