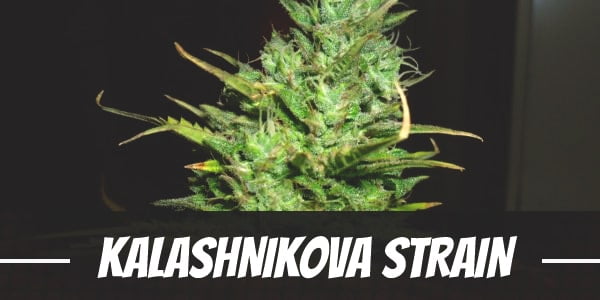 The famous AK-47 strain is nothing like the gun it was named after.

Rather than a weapon of mass destruction, it is a Sativa-leaning strain that brings people together with its recreational buzz.

While almost perfect in itself, breeders Green House Seeds decided to enhance its resin production by crossing it with White Widow – a worldwide phenomenon among growers and enthusiasts alike.

Together, they parented the Indica-leaning Kalashnikova who credits its name after the original designer of the famous AK-47 rifle. It possesses psychedelic capabilities worthy of its powerhouse lineage.

For one, the bud is fast-acting and long-lasting. Still, it maintains its own unique traits such as delivering an energizing high in spite of its little Sativa influence. For this reason, it remains a fan favorite among the cannabis community.

Unlike other Indica-leaning strains, Kalashnikova is not at all a creeper. Instead, it is a fast-acting hybrid with effects beginning almost immediately after the first puff. Its initial onset, in fact, is marked by a jolt of energy that surges throughout the body beginning from the temples.

Feeling reinvigorated, many find themselves feeling lighter. There are even those who radiate with happiness as the euphoric buzz spreads to the deepest recesses of the mind. While some prefer basking in the newly found vigor, casual users with work to do take advantage of the sense of creativity that comes with the mental clarity. With thoughts flowing and forming freely, the mind is solemn, focused, and keen to finish tasks within the day.

As alluded to earlier, the strain delivers an energizing buzz that uplifts users from tiredness. At the same time, it wards off uneasiness and tension for hours even after the last hit. While a couchlock is not likely, it is definitely a possibility when too much of the strain is used. After all, the bud does boast amazing THC levels of up to 18%. In moderation, however, it leaves users in a complete state of relaxation. And, perhaps, hazy introspection as the mental high persists.

Kalashnikova is a surefire start for a prolific day ahead. Its clearheaded high basically amps up focus and creativity while its soothing body sensation caps the day perfectly.

Kalashnikova’s smell is best described as a pungent citrus with a sweet kick. Blending with it are hints of spiciness and wet soil. Although, tropical notes fill the room once the bud is broken apart or combusted.

Like drinking a tropical shake on a hot day, Kalashnikova bursts in the palate with overtones of lemon, mango, and grapefruit. A sweetness reminiscent of honey spreads around the mouth as the smoke is savored. Surprisingly, the aftertaste is quite spicy.

A common effect of smoking marijuana is a cottonmouth. To some degree, users may also experience dry eyes especially since cannabinoids tend to interfere with moisture production in the tear ducts. Seasoned enthusiasts usually ignore the symptoms due to their mildness. But, in case of discomfort, rehydrating with a few glasses of water will do the trick.

There is also the possibility of feeling slightly paranoid especially while smoking high doses of Kalashnikova. Most of the time, however, users only experience a subtle headache due to the Indica leaning strain’s heavy-hitting effects. For this reason, intake should be built up in small increments.

Kalashnikova is undoubtedly regarded as a strain with great pharmacological value in spite of its lack in CBD. The combined efforts of its THC and other cannabinoids like terpenes provide a reprieve against a plethora of medical conditions.

One of Kalashnikova’s best uses, in fact, is as an analgesic. In high levels, THC delivers a soothing body buzz that eases away aches and various kinds of pains including the sharp sting caused by muscle spasms.

A natural sleep aid, Kalashnikova promotes overall wellness by enhancing both the amount and quality of rest per night which makes it perfect for users with sleeping disorders like insomnia.

Kalashnikova’s Sativa traits are mirrored in its height. Rather than having a naturally short structure, the plant grows past 3 feet but remains manageable enough for most growing spaces. However, those with truly limited areas may need to shorten the vegetative period or to the plant early. It may also require a bit of pruning as it tends to be quite branchy. Apart from aesthetic reasons, trimming encourages better air and light circulation.

There is no reason for Kalashnikova not to thrive outdoors. Backed by astounding Indica genes, it is sturdy and can withstand various problems brought about by nature. However, the danger of pests ravaging the whole batch looms. As such, it is not uncommon to see some growers cultivate their plants in controlled environments where they are much more protected. Not only that, important factors such as lighting, temperature, and humidity are easily adjusted.

Once mature, Kalashnikova produces beautiful lime-colored buds. They are dense and slightly tapered on one end. Each are snuggled comfortably under a thick layer of white trichomes, which shines like crystals when hit by light.

Flowering time for Kalashnikova is typically 8 weeks with each square meter yielding up to 26 ounces of buds. Depending on the skill of the grower, the plant may blossom a week earlier or later. Applying either the Sea of Green or the Screen of Green method also encourages the plant to produce vigorously.

Although Kalashnikova can be grown indoors, it tends to be more productive when cultivated outdoors. Each plant yields up to 35 ounces of buds by the end of September to the second or third week of October.

What is the Kalashnikova strain yield?

How much THC does Kalashnikova have?

What are the origins of the Kalashnikova strain?

Kalashnikova was created from a mix between AK 47 and White Widow.

Have you ever smoked or grown your own Kalashnikova? Please let me know what you think about this marijuana strain in the comments below.