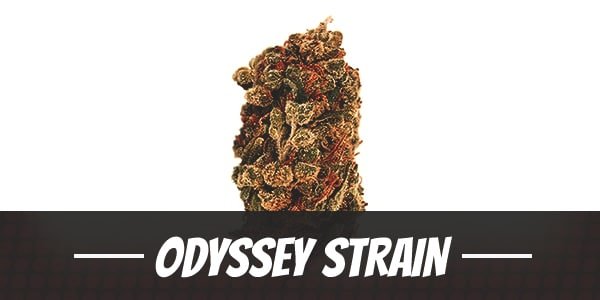 Odyssey brings to mind the epic poem written by Homer telling the story of Odysseus and his journey home. It took him ten long years before finally arriving in Troy. With that as the backdrop of our introduction to the cannabis strain, it is pretty obvious what it can do.

Using the Odyssey strain allows users to embark on an epic journey to a new dimension where it is one exhilaration after another. It is an experience that is both intense and yet calming at the same time. In other words, this hybrid promises to deliver an experience like no one else has ever had.

We like the back story a lot. After all, the journey Odysseus took had been long and laborious. In fact, it was also filled with adventure and dangers. In the same manner, breeders have to go through generations of trials before finally creating a new breed of genetically superior cannabis. As a result of crossing the classic Afghani landrace Indica with Cat Piss, the result is a strain that in turn will bring users on a fascinating cerebral adventure.

Odyssey strain packs a lot of THC. In some tests, it has reached around 23%, and that is insane. In a sense, the journey Odysseus took was crazy filled with heart-pounding adventure. A reason why we are making a fuss of its potency is that a lot of people do not understand how potent it is the first time. Almost always, the fact that it is a slow starter has lulled users into using more.

It may take a little while, but once it starts to manifest itself, it surges in with an unstoppable force. In an instant, the mind clears making way for a heightened ability to focus. Also, Odyssey delivers a boost in energy levels allowing users to take on tasks. Energized, it also induces a euphoric feeling to uplift the mood.

At this point, it is easy to imagine how much fun Odyssey can be for social interactions. It could be true as users also tend to feel tingly and very sociable. And then its other half starts to weave itself causing a numbing body buzz. As the intensity of its effects begins to shift from the head down to the body, users find themselves highly at ease. Perhaps, too much, as some may find it hard to get up from the couch.

Odyssey has an interesting aroma. It consists of sugary sweet smell with strong floral note and earth. In essence, this unique scent blends in so well that most people will find it appealing and enticing.

The sugary sweet notes carry over to its smoke and come with a lingering aftertaste of pine wood. It has a fruity note that makes it quite a delight to use.

Even when using it in moderation, there is a chance that users will experience dry mouth. Having a jar of water on the side should ease the symptoms. As for other possible adverse effects, they occur only if users overindulge.

Some people reported feeling a slight pressure on their eyes while others feel dizzy. In rare instances, some people have also experienced feeling a little more paranoid.

Odyssey is a very potent strain. As such, it is best to stay on the conservative side and use only a small amount especially if it is the first time. Over time, they do have the choice of increasing it little by little.

There are two ways to use Odyssey depending on the necessity. In most cases, a small amount is more than enough to squash stress. Having an efficient mood-altering trait, it can be useful for people with depression. It can also be helpful with other mental health disorders such as ADD/ADHD, PTSD, and Bipolar.

If it is to help patients with chronic illnesses, Odyssey can provide pain relief. In this way, Odyssey provides comfort even as diseases ravage the body.

Finally, by using a tad bit more and allowing for a heavier Indica hit, this is soon followed by drowsiness. People can use this at the end of a long day to set the tone for quality sleep.

Odyssey plant grows well outdoor and indoor. But because it is not tolerant of cooler temperature, growers in such regions will want to cultivate it inside the house. It grows like a typical Sativa plant which means it can be quite tall. As such, growers will have to be more diligent in topping and pruning to keep it manageable inside a growing habitat. Using the Screen of Green to train the plant early can also result in faster growth and increase its production.

Growers have a choice of using soil for its medium or hydroponics. Of course, most prefer the latter as it is more efficient. It does come at a cost, though. Once Odyssey reaches eight weeks, it is ready to transition to the next stage. Under 600 watts of lighting, each square meter can have a generous yield of 12 to 16 ounces.

Not a lot of people can have the pleasure of growing cannabis out in the open. As there are areas where it is legal, a few do have that privilege. Odyssey will thrive where there is adequate sunshine. In the northern hemisphere, it starts to enter the flowering stage by the end of September. Each of these plants can produce at least 16 ounces of buds or more.

Have you ever smoked or grown your own Odyssey? Please let me know what you think about this marijuana strain in the comments below.