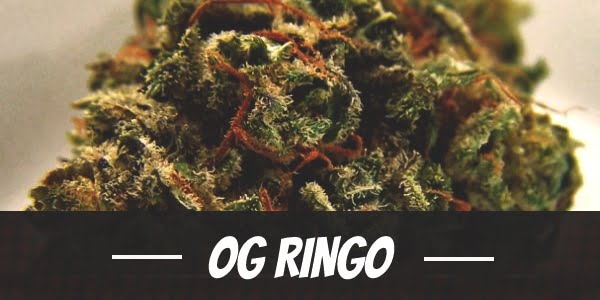 It is a common misconception among users that descendants of strains like OG Kush are often copies of it. However, that is not always the norm. Take, for example, the phenotypes of the original ocean grown cannabis.

Instead of being exact clones, each phenotype exhibits unique traits in terms of appearance, fragrance, flavor, and potency. Some even totally deviate and instead become Sativa leaning strains. But, that is not the case with OG Ringo, an offspring of OG Kush which retained its well-known Indica traits.

OG Ringo itself has an interesting backstory. It took nine painstaking years before Southern Humboldt Seeds Collective (SoHum Seeds) could be fully satisfied with the outcome. But, why spend such a long time creating a single phenotype?

The answer lies in OG Ringo’s namesake, Lawrence Ringo. Not just a prominent marijuana activist, he was a pioneer in the field of breeding and altering CBD genetics. More importantly, he founded SoHum Seeds. Thus, it is only right that on a premium hybrid with the finest genetics be named after him.

Unsurprisingly, OG Ringo surpassed its parent’s THC levels. Averaging between 19% and 28%, it is far more potent than OG Kush.

Today, OG Ringo is what many would consider a real breakthrough in the cannabis community. Beyond recreational use, this hybrid carries the advocacies of Lawrence with its immense medical benefits.

Consider this strain to be an enhanced version of the original OG. Although some of its effects do deviate, what it brings to the table is intense euphoric psychedelic that that can last for hours.

The high begins with an uplifting buzz in the temple following the first few puffs. Feeling reinvigorated, mood levels are elevated then amplified. It leaves users feeling happy and upbeat.

Gradually, a warm tingling sensation precluding the strain’s relaxing effects rolls down to the body. Gently, it soothes the muscles and relieves users of stress.

Though predominantly Indica, its effects are mellow and blend well with the initial cerebral high even as it becomes more pronounced. Unlike its predecessor, it does not cause a devastatingly numbing body high. But, just a heads up, it does light up the urge to eat.

If used excessively, however, it can be quite overwhelming. An extremely potent strain, it can leave people glued to the couch with a speedy mental high. Of course, this does not last forever. As time goes on, users will start to feel drowsy and eventually fall into a deep slumber.

Taking after the qualities of its parent strain, OG Ringo emits an extremely fragrant perfume of lavenders and lemons. Underneath the two overpowering scents, there is a refreshing, earthy pine. Together, they smell like an air purifying aerosol.

Similar to its fragrance, OG Ringo is very refreshing. Besides the zesty lemon, it has the woody and herbaceous taste of lavender. Drawing in its smoke reveals the undertones of minty pine. And, on the exhale, it is nutty.

Despite its potency, OG Ringo doesn’t have much side effects. Of course, there is always the case of cottonmouth and even dry eyes. But, these are never extreme. Moreover, they can easily be mitigated through hydration.

Other possible reactions to smoking marijuana are dizziness and headaches. However, these side effects rarely affect users. They usually happen when one overuses or miscalculates their tolerance level. As with all strains, moderation is a must to avoid getting these reactions.

Lawrence Ringo dedicated his life to the development of high-level CBD strains for the medical marijuana market. It is only proper that the strain named in his honor has tons of medicinal qualities. And, indeed, OG Ringo does disappoint.

The intensely uplifting high that OG Ringo delivers at the onset promotes upbeat moods. It usually reduces and even busts away all the stress gathered during the day. At the same time, its happiness inducing quality make it a great anti-depressant.

With exceptional levels of psychoactive compounds, pain relief is certain. It alleviates all kinds of pain and aches, from mild to chronic. Anti-inflammatory helps by soothing muscles.

As OR Ringo can put one to sleep, it is of great benefit to insomniacs. It is also a better option than sedatives, in some cases, to help patients undergoing treatment sleep.

Since OG Ringo is a phenotype of OG Kush, it exhibits similar growth patterns. For one, it performs well whether grown indoors in a grow room or outdoors in the garden. Though it thrives in warm climates, it can easily withstand changes in weather. However, aspiring cultivators may have to worry about bugs. Despite the strain’s sturdiness, it has low resistance to pestilence.

OG Ringo flowers between 8 to 9 weeks indoors. With little to no maintenance, it can yield up to 17 ounces per square meter. Home growers often have the upper hand in growing this strain as grow rooms and tents lower the possibility of pests affecting the batch.

The outdoor blooming phase of OG Ringo usually falls around late September. At harvest, backyard growers will get more than 16 ounces per plant.

Have you ever smoked or grown your own OG Ringo? Please let me know what you think about this marijuana strain in the comments below.