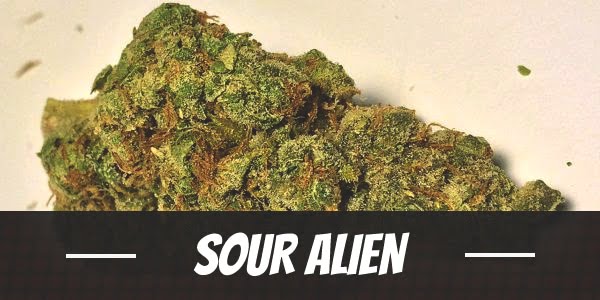 People expect a lot of things from a particular strain. From its cultivation to its fragrance and most importantly, to its effects. It is also essential for users to know if it suits their taste. Hence, when looking at possible hybrids to use, much is expected from those that descended from well-respected and sought-after lineages such as Sour Alien.

The Cali Connection used two of their prominent strains in developing Sour Alien. One of their motivations is to come up with a hybrid that does not reflect the classic traits of cannabis with regards to not only its appearance but also its effects.

First of the parent strains used is Alien Kush, a child of Las Vegas Purple Kush (LPVK) and Alien Dawg. It is an Indica-dominant strain that is well-known for mental and body buzz. Also, it tends to slowly creep into the body and leave users definitely feeling out of this world.

The other strain used is Sour Diesel, a hybrid that is known to keep its users beyond contented with the remarkable high that it delivers. Due to that, it is considered by many in the cannabis scene as legendary.

Through a careful process of selection and breeding, The Cali Connection finally released Sour Alien. For the users, it is a hybrid that starts off with a reinvigorating high before bringing one to deep relaxation. And, for the medical users, it is one strain that does not only relieve stress but also take away pains and aches.

Descending from a prominent line and bred by a reputable breeder, Sour Alien has a lot to offer to users. With regards to its potency, it ranges from above-average to very potent. Besides varying THC content due to the quality of seeds and cultivation, it also depends on the physical conditioning of users.

Sour Alien tends to lean towards the Indica side, but generally, it is a pretty much-balanced strain. At its onset, it induces a euphoric buzz in the head that quickly uplifts the mood. Feeling happy, users also have heightened focus and a clear mind. During this time, staying productive is not an issue at all. However, that changes when its Indica traits kick into the body.

Like many others, it takes a little while for the full physical effects to manifest. As the calming sensation spread down and all over the body, it results in users feeling completely relaxed. As the effects continue to intensify, its sedating properties can leave users in a couch-lock.

At the first sniff, Sour Alien has a pungent scent of earthiness that is reminiscent of its Kush lineage. As the buds are broken, it emits a distinct smell of pine with a sweet note and a subtle hint of citrusy lemon.

Sour Alien has flavors that are either loved or perhaps disliked by cannabis users. Similar to Sour Diesel, this strain has a pungent earthy taste with notes of pine. It is also reminiscent of Pine-Sol with its lemony fuel hint.

Whether or not a strain is potent, there are adverse reactions associated with the use of cannabis. Most of the time, people experience dryness of mouth and eyes. These conditions can become more pronounced if users do not use it in moderation.

Other reactions may occur when overindulging. For instance, some people may feel dizzy or have a mild headache. Those who are prone or susceptible to anxiety issues may want to reconsider its use for it is known to cause a few people to feel anxious.

Lacking in CBD, Sour Alien relies on its psychoactive properties to provide medical benefits. For instance, it is an exceptional mood-enhancing strain that helps reduce stress. Even people with depression and other related mental health conditions can benefit from its uplifting buzz. In essence, it allows these people to recompose themselves and cope with their illness better.

On the physical side, the sedating effects of Sour Alien can put people on a couch-lock. While it certainly induces deep relaxation, it does so by soothing pains and aches. For that reason, many people suffering from chronic illnesses sought out this strain for comfort.

Sour Alien is not only for the experienced growers. Even beginners in gardening or cultivating cannabis should find it quite a pleasure to grow. It is a sturdy and at the same time a forgiving plant in that it tolerates little mistakes here and there.

Growers have a choice of planting it inside the house or outdoors. Because of its pungent odor, privacy may be an issue. Because of that, most people cultivate cannabis indoors. In this case, using a carbon-activated charcoal filter is highly recommended.

Sour Alien thrives well indoors when cultivated on either soil or hydroponics. It is also highly adaptable to the Sea of Green (SOG) training method. Flowering time falls between 9 to 11 weeks. Expect yields that could be as many as 14 ounces per square meter.

While Sour Alien loves sunshine, there should also be ample shading to keep it from overheating. It usually flowers in mid-October with each plant producing up to 12 ounces of buds.

Have you ever smoked or grown your own Sour Alien? Please let me know what you think about this marijuana strain in the comments below.