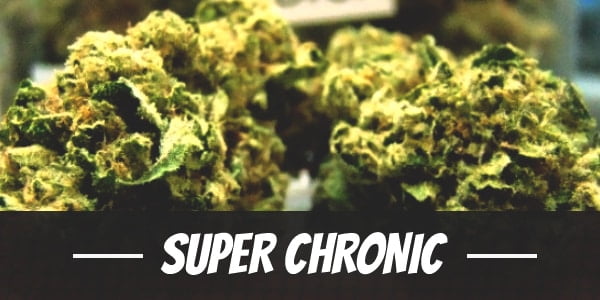 Chronic, when it was first introduced in the 90s, quickly turned into an industry game changer. It was the epitome of premium marijuana that catered to various enthusiasts with its impressive psychedelic effects, potent THC, vigorous yields, high trichome production, as well as delicious terpene profile which raised the bar high for other strains. Today, its influence continues to be felt in spite of newer products being added into the list everyday.

In perhaps trying to recreate the original all-around bud, an unknown breeder took Critical Kush for its Indica genes, as well as splendid CBD content, and paired it with the former. The cross resulted in Super Chronic, which is an improved Indica-leaning version of Chronic.

Unlike the original, Super Chronic’s effects are more physical with an emphasis on a stress-crushing, tranquilizing high that leaves one basking in dopey contentment. Furthermore, it also carries an ample amount of CBD that averages between 2% to 5%. And, with THC levels of up to 19%, the immensely therapeutic Indica-leaning bud is also potent.

Super Chronic complements a calming head high with a tranquilizing body buzz that keeps users feeling peaceful for hours. Its initial onset, however, is quite slow in that it usually starts 15 minutes after the first two to three puffs. As such, it is important to pace consumption of the bud to keep it from overwhelming enthusiasts.

During the initial onset, a subtle euphoric buzz enters the mind. It is barely noticeable but, as it intensifies, begins to clears away any distractions. It stimulates thoughts and ideas while sharpening the senses. The heightened sense of focus leads to a few hours of productivity as users pursue passion projects after work.

While others take advantage of the renewed motivation, there are many who prefer to bask in the innate sense of happiness that the bud inspires. It radiates outwards as one smiles for the most minute reasons. In a state of bliss, users momentarily forget life’s problems to fully enjoy the upcoming body high.

After about an hour or two, a soothing sensation trickles down from the temples down to the rest of the body. It comes in waves, rhythmic and calming as it crashes on the muscles. As it replaces tension with relaxation, it plants a heaviness in the limbs that gradually makes the eyelids droop.

Eventually, users fall into a deep sleep as the serene mental and physical effects persist. However, if one were to use the strain outside of limits, it will lock users to the couch until the high wanes.

Super Chronic has a pungent smell reminiscent of sour skunk. Notes of pine are present too along with a subtle touch of mint. Crushed and combusted, overtones of wet soil are detectable as it intensifies.

Super Chronic tastes just like how it smells. It is tangy with strong overtones of lemon and skunk. Accentuating it is cooling mint that makes the bud seem like a refreshing drink. On the exhale, it leaves a refreshing pine aftertaste with undertones of earth.

Super Chronic, like other strains, has moisture-inhibiting cannabinoids that interfere with the production of saliva. As such, it is not uncommon for users to experience a cottonmouth while using the bud. The dryness usually lasts for hours but will go away on its own. Still, users should stay hydrated throughout the day.

Super Chronic has high concentrations of CBD that ranges from 2% to 5%. As such, it is contains immense therapeutic value that helps ease a variety of afflictions. Among its best uses is, in fact, reducing redness and swelling brought about by inflammation.

Combined with the analgesic properties of its THC, the Indica-dominant bud relieves agonizing aches and pains beginning from the temples. It eases cramps in the stomach which, if left unattended, can affect the appetite as well as cause vomiting. As such, Super Chronic is a great option for patients suffering from eating disorders, cachexia, or the nauseating aftereffects of chemotherapy.

Apart from the physical, Super Chronic also has positive behavioral effects that result from its happy high. In getting rid of negativity, for example, it helps manage symptoms of mental health issues like depression or PTSD. At the same time, it works as a stress reliever while calming the mind of overwhelming dread or anxiety.

Sleeping is an important components of the healing process but also one of the most overlooked. Relentless restlessness can contribute to the early onset of depression or exacerbated stress. To this end, Super Chronic works perfectly well. It does not only get one drowsy but also improves the quality and quantity of sleep.

As an Indica-dominant plant, Super Chronic is quite easy to grow. It is sturdy with a strong resistance to strong gusts of wind and fluctuations in weather. Moreover, it is a vigorous producer that yields densely packed buds packed with trichomes.

However, it may need to be pruned and thinned out often. Its compact structure is often a hindrance to even airflow and light among the lower nodes. With moisture seeping into the crevices without being aerated, it can easily develop into mold or mildew. Cutting away dead parts also improves nutrient distribution to the healthier branches. The process must be done carefully though, to keep from stressing the plant.

Basic growing techniques are also a requirement when it comes to growing Super Chronic. For example, one should keep from overfeeding the strain with either minerals or water as it can lead to nutrient burn as well as bud or root rot. Soil is a great option for beginners as it enhances flavors while being completely cheap. Meanwhile, a hydroponics medium will produce cleaner buds/

Like other Indica-dominant strains, Super Chronic has a quick flowering period of 7 to 9 weeks. Once ready for harvest, it yields 10 to 12 ounces of buds per square meter.

In the northern hemisphere, Super Chronic blossoms from the last week of September to the middle of October. It yields at least 12 ounces of buds per plant.

Have you ever smoked or grown your own Super Chronic? Please let me know what you think about this marijuana strain in the comments below.