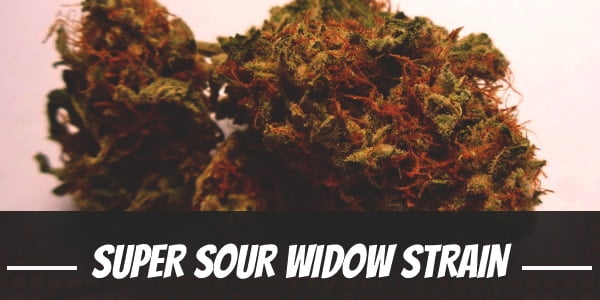 Having a new strain is no longer a big deal. The truth is, many modern hybrids do not last long. But one, in particular, has caught our attention – Super Sour Widow. It happens to have one trait that makes it unique.

It seems that the strain has not gone mainstream for now. In fact, even we do not know much about it except for a few vital details.

First, it is a cross between Super Sour Diesel and White Widow. Knowing both the parent strains, we can almost tell what to expect from the offspring.

Super Sour Diesel has quite a reputation. To begin with, this Sativa strain delivers an intense cerebral buzz that wipes out stress. It is also incredibly potent and should be avoided by beginners. Another thing notable is the smell of fuel infused in its odor.

White Widow, on the other hand, has been around for almost three decades. Like Super Sour Diesel, it also induces an intense euphoric high.

Both the parent strains are also known to make users feel energetic and motivated. At the same time, they are also notorious for its overwhelming effects if users are not careful.

Staying true to its lineage, Super Sour Widow indeed has the best traits of its parents. But going further, it can also cause psychoactive effects.

As alluded to a while back, Super Sour Widow has one eye-catching characteristic. Besides having some 18% THC, it also has a CBD of 11%. At this time, we cannot confirm it with lab tests, though.

To say that Super Sour Widow leans more towards its Sativa side is actually an understatement. That is because of the potent mental high it brings.

Early on, the combined effects of its Sativa and Indica traits works gently to induce a euphoric buzz that uplifts the spirit. Users tend to feel relax and happy, cheerful and with other people, more sociable. They also are quite productive with a clear mind and better able to focus. Not to mention, it also gives a boost in energy.

As the effects start to intensify, the surging energetic buzz begins to overwhelm the mind. While it does not cause a couch-lock, there is a chance that some people may have an intense psychoactive experience. Obviously, this is a trait inherited from the White Widow.

With that in mind, users should be cautious when using Super Sour Widow. An excellent way to begin with this hybrid is to start off with half of usual dosage. As for beginners, other strains are gentler and easier to handle.

Super Sour Diesel has a pungent odor that has a skunky note mixed with a fruity scent. While it is pleasant for most and desirable for some, that also means that for growers, privacy becomes an issue if they do not want neighbors to know what they are cultivating.

With regards to its taste, the sweet Super Sour Widow is contrasted by the citrusy and sour lemony flavor with a hint of fuel. The concoction of flavors may sound strange but it works, and most people should find it pleasant to use.

Dry mouth and eyes, these are the usual reactions to using cannabis. Besides these, there are a couple of things that users should be aware of.

One is that it can cause users to feel more anxious or paranoid. Hence, people who have these issues should avoid using Super Sour Widow.

Another one is that it can cause a psychoactive experience. Not that it is a problem, but it can be an unnerving effect for some people.

These adverse reactions do not pose any long-term health concerns. In most cases, they are temporary and should be gone as the effects of the strain subsides.

The combined mental and physical effects of Super Sour Widow brings a lot of good to the people who need it the most. For instance, it wipes out stress. As such, it is also used to manage depression and other mental health issues.

Another thing that it is used with is in pain relief. But in this case, rather than the sedative qualities of the Indica side (of which it does not seem to have), it is more a matter of users thinking of other things hence ignoring mild pains.

As mentioned earlier, Super Sour Widow appears to have 11% CBD. It is already rare for a strain to even have 1%, let alone have more than 10%. But if this is the case, then this hybrid may prove to be beneficial to people suffering from seizures and epilepsy.

Super Sour Widow does not appear to be available in seed form. Hence, the only way to grow this is to find and get a clipping. Cloning it may seem impossible, but never say never.

At any rate, based on its genetic lineage, it should be an excellent cannabis to cultivate in a warm environment, outdoors or indoors.

The flowering time of Super Sour Skunk should fall between 9 to 11 weeks when grown indoors. Each square meter is also likely to produce 10 to 12 ounces of buds.

For growers who have the luxury of growing this plant outdoors, it should reach the flowering stage between October and November. Each plant will also produce at least 12 ounces and possibly, more.

What is the Super Sour Widow strain yield?

12 to 14 ounces per square meter indoors, 14 ounces or more per plant outdoors

How much THC does Super Sour Widow have?

What are the origins of the Super Sour Widow strain?

Have you ever smoked or grown your own Super Sour Widow? Please let me know what you think about this marijuana strain in the comments below.