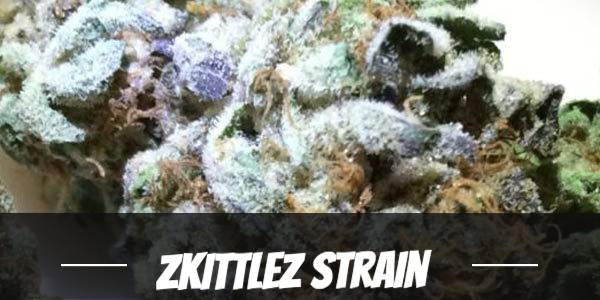 Zkittlez is a cross-bred balanced hybrid that inherited its supreme genetics from its unbelievably fruity parent strains. This strain can sometimes feel more indica to some users, but is generally known for its uplifting yet relaxing properties, highlighted by its sour citrus aroma.

Zkittlez is potent mix between Grape Ape and sativa Grapefruit, resulting in a fragrant flower with a complex fruitiness that stands out from the rest. Its THC levels can be milder than its counterparts, but this didn’t stand in its way of bagging the first place Best indica prize at the 2015 Cannabis Cup in both San Francisco and Michigan.

Here are some amazing seed deals. Buy 10 and get 10 free!

Rumors say that Zkittlez has been cross-bred with another unknown strain to become what it is today, which we can thank the breeders at 3rd Gen Family and Terp Hogz for. Since then it has only grown more popular as it displays its many useful applications as both a medicinal as well as a recreational plant.

Zkittlez is said to be strong but just about, as its THC levels are within reasonable measures. Its effects are strong without being overpowering, making it a suitable strain for those who don’t have as much experience under their belts.

This strain is a mellow relaxant to jam out to, when you want to just kick back and untangle yourself from your thoughts at the end of a work day. Zkittlez is happiness-inducing, a trait that is further highlighted by its extremely citrus and fruity aroma, adding an extra zest to its playfulness.

Zkittlez is euphoria-inducing, making you feel more vividly about everything around you, and keeping you in an elated state. You will feel uplifted and motivated when smoking this hybrid, and it will keep you fueled by good vibrations all the way until the effects start to wear off, making you consequently sleepy.

Zkittlez is distinctive in presence not only due to its pretty appearance but especially because of its aroma. This strain contains hints of sweetness and citrus, with a powerful kick of sour fruits. A cloud of sweet herbal notes will hang in the air of any room this bud enters.

Zkittlez is as flavorful as its moniker suggests. This plant tastes like sweet candy, with shocks of fresh grape and berries further enhancing your high. This hybrid is balanced even in its flavors, with a sour grapefruit and general tropical vibe that you will notice instantly when coming in contact with this strain.

Zkittlez does have some side effects, which can vary depending on your experience with this type of hybrid. You are likely to feel dizzy when smoking this strain, especially in the beginning, but for most users this doesn’t usually persist.

This strain will usually leave you with the standard dry mouth and dry and often itchy eyes. Zkittlez may also in some cases cause a slight anxiety and nervousness, which for some users can also result in a lingering yet mild headache that is likely to last for the entire high.

Download my free Grow Bible and grow your own Zkittlez!

Zkittlez is an uplifting strain despite often feeling like an indica. This delicate balance makes it an easy choice for patients who are struggling with chronic depression, and are looking for a way to feel less weighed down and more elated and motivated.

Chronic stress sufferers prefer this strain simply because it is very effective in helping them control their negative emotions. Zkittlez can make you feel more energized, at the very least cerebrally, encouraging positive thoughts to be entertained and negative ones forgotten.

Zkittlez can also make you feel less nauseous, allowing for an increased appetite in patients who are being exposed to radiation treatments. If you suffer from chronic pain, this strain may be ideal for you, and it can allow you to drift off into sleep much easier due to the subdued aches.

Zkittlez is a strain that is sheer joy to cultivate due to its simplistic and easygoing character. This strain can be grown both indoors and outdoors, where it prefers to be exposed to lots of sunlight and kept away from too much rain and humidity.

Zkittlez grown indoors can generate as much as 13 ounces of bud during harvest, requiring an average of about 7 to 8 weeks to fully flower and be ready for a generously yielding harvest.

For all your Harvesting questions, please download our FREE Harvesting Guide!

Zkittlez grown outdoors can yield an estimated average of about 17 ounces of bud per plant. This strain flower throughout the summer and can be ready for a harvest around the beginning of October.

What is the Zkittlez strain yield?

How much THC does Zkittlez strain have?

What are the genetics of the Zkittlez strain?

The Zkittlez strain was created by mixing Grape Ape and sativa Grapefruit.

Have you ever smoked or grown your own Zkittlez? Please let me know what you think about this marijuana strain in the comments below.