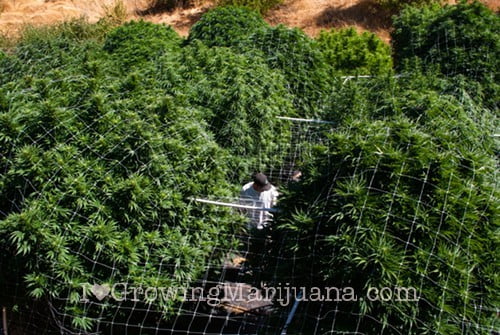 The basic Macro Nutrients are not enough for a marijuana plant to grow normally. Micronutrients are also very important for maintaining the vigour and health of each plant. These Trace-elements include Calcium, Magnesium, Sulphur, Manganese, Boron, Zinc and Copper. They are a part of all fertilizers like macronutrients but their portion is much lesser.

The list of the micronutrients below gives additional information about the atomic characteristics, the importance and results of the deficiency of each micro element.

Download my free Grow Bible to read more about micronutrients.

First of all, Calcium is one of the major micro elements. It bears the symbol ‘’Ca’’ in the Periodic table of elements. Its atomic number is 20 and it has a mass of 40 approximately. Its role for the marijuana plant is vital due to the fact that it is a part of the walls of the cells. It provides strengthening of the stems and branches and helps in the formation of the root and its tip’s growth. A deficiency of Calcium causes distortion of the leaves. Their margins are hooked and the roots do not finalise their development. Their tips are weak.

Magnesium is also an important element. Symbolised ‘’Mg’’ in the Periodic table, it has the number 12 and an approximate mass of 24. Magnesium stimulates the formation of chlorophyll and most of the reactions with enzymes. The structures of the leaves and the veins in them are healthy due to this element. When Mg is deficient, the effect is different in each plant species. Cannabis plants, for example, suffer from yellowing of the leaves, disappearance of the leaf withering which starts from the older or lower leaves. The excessive levels of Magnesium are the cause for a Calcium deficiency.

Sulphur or ‘’S’’ in the periodic table has the number 16 and an atomic mass of approximately 32. It consists in the proteins of marijuana plants and is important for their production. Moreover, it participates in the formation of chlorophyll and the growth of the plant. The deficiency is presented by slower rates of growth along with smaller leaves which have developed a mutation because they are round and roll upwards. Soon they become stiff and die off.

Manganese (or ‘’Mn’’, atomic number- 25 and atomic mass of approximately 55) is responsible for the production of enzymes and chlorophyll production vital for the photosynthesis. Its deficiency has various results which depend on the species. Cannabis plants’ chloroplasts become yellow and the stems are still quite green. On the surface of some leaves there may appear spots of white or grey. It also causes Iron- deficiency with similar symptoms to it.

Boron (B, Z=5, A=10) helps moving the sugars and reproduction as well as the water consumption by cells. It participates in the formations of stems and stalks and prevents Ca from becoming insoluble. Moreover, it aids in the production, colouring and formation of leaves and their structures. Its deficiency causes death tips and malformations of the marijuana buds. It causes Mg and K deficiencies.

Similar are the effects and the results of the deficiencies of Zinc (Zn) and Copper ( Cu). More on micronutrients here

0 comments on “Micro Nutrients And Their Effect On Cannabis Plants”