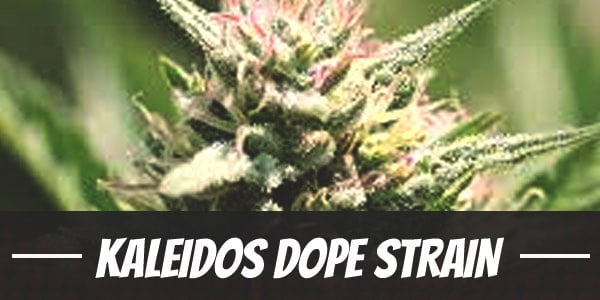 Kaleidos Dope is a stunning strain that receives praise for its eye-catching colors of purple accentuated by pink pistils. In addition to that, it is a low maintenance high-yielder with commercial potential. For this reason, it has become a go-to strain amongst growers.

OG Purple Fire Thai is a diverse strain with genetics ranging from a Northern California cut of Fire OG that was later pollinated by Purple Thai and Neville’s Haze. It delivers a cerebral high that sweeps away cobwebs in the mind. Not only that, it has a sturdy growing profile. Snow High Seeds later crossed its own bud with Sour LSD to improve trichome and bud production.

Although widely recognized for its growing prowess, Kaleidos Dope is also a useful pharmacological strain. It relieves symptoms for a variety of afflictions that affect enthusiasts albeit temporarily. Meanwhile, its recreational buzz is also one-of-a-kind.

Kaleidos Dope is not a strain to be trifled with or underestimated. At up to 24%, using more than one’s tolerance allows can sharpen the senses and lead to an overwhelming sensory experience. As such, users should always start with low dosages.

It delivers a mood-enhancing euphoria at the onset that inspires an upbeat disposition. The behavioral change is almost immediate. Downward mouths turn into broad smiles as an uplifting buzz clears the mind. As it intensifies, it leaves users feeling happy.

After two to three hours, a light pressure from behind the temples oozes down to the rest of the body. It is deeply relaxing and soothing to the muscles. In all likelihood, users will want to flop on the bed or lounge around the couch as the physical effects persist.

Overall, Kaleidos Dope is an impressive recreational strain that releases stress at the end of the day and invigorates the mind with its subtle mental stimulation. For morning use, users should keep the dosage in moderation to keep the body high from planting a heaviness in the limbs.

Kaleidos Dope has a pungent fruity fragrance with strong overtones of strawberry and grapes. It has a sour undertone that is quickly drowned out by the sweet scent of bubblegum once the buds are either broken apart or combusted.

A swig of its sweet smoke is enough to fill the mouth with Kaleidos Dope’s signature bubblegum flavors. Accentuating it are notes of strawberries and grapes which bring out a subtle sourness. On the exhale, it leaves a fruity but chemical aftertaste that lingers for hours after the last toke.

Dry eyes and a cottonmouth are two inevitable experiences that come with marijuana use. It is due to cannabinoids interfering with the body’s natural ability to produce and retain moisture. Although mild, users can down a few glasses of water throughout the day to ease the irritation.

In high doses, Kaleidos Dope can induce a condition called greening out. It is characterized by dizziness that can trigger anxiety as one develops a keen awareness. In worst case scenarios, it can lead to a subtle feeling of paranoia. Apart from one’s disposition before the high, one critical factor that raises the likelihood of experiencing the said effects is going beyond individual tolerance. Because of this, users should stay wary while using consuming the bud.

Kaleidos Dope is a great growing with equally impressive recreational and medicinal potential. Its cannabinoids, particularly its THC and CBD, manage the symptoms of mental and physical health issues buzz.

Its initial onset, for instance, delivers an uplifting high that leaves users feeling happy for hours. In doing so, it releases stress by enhancing and stabilizing the mood while clearing the mind with its calming euphoria. As such, it is also a source of great comfort to patients with mental health issues like depression, PTSD, and anxiety.

In high levels, THC turns into a natural analgesic that eases a variety of aches and pains from all over the body. It is especially effective in appeasing headaches, migraines, and intraocular pressure which is a symptom of glaucoma.

Kaleidos Dope is a branchy plant with sturdy stems. It can withstand various factors like strong winds and fluctuating weather conditions. Because of this, it is a great beginner’s strain that one can cultivate in a garden or farm in the northern hemisphere.

Indoors, growers can manually adjust factors like temperature, lighting, and humidity. It does not need to be topped but pruning will help circulate air and light into the lower nodes. Installing a proper ventilation system also helps reduce the strong fragrance that Kaleidos Dope produces during the flowering period.

It works best with both the Sea or Screen of Green method due to its relatively tall height and semi-compact structure. Growers can choose between placing more in a single square meter or bringing up the lower nodes and creating an even canopy for better light distribution. Regardless, both plant training techniques will encourage higher yields.

Another way to significantly increase turnout is to cultivate the plant in a soilless medium like a hydroponics setup or coco coir. It delivers nutrients directly to the roots thus creating more budding sites while hastening the flowering period. However, soil is also a good medium if one wants to enhance terpene production.

Once ready for harvest, it yields dense buds that are covered in thick trichome and sticky resin with eye-catching pink pistils. It can leave a glistening but gluey film on one’s hand while manicuring the plant. Although its hues usually have a forest green hue, growers can bring out its purple undertones by lowering the temperature of the grow room.

After flowering for 7 to 10 weeks, Kaleidos Dope produces between 10 to 12 buds per square meter. Under the hands of a seasoned grower, it can yield higher.

Kaleidos Dope matures between the last week of September to the end of October when cultivated in the northern hemisphere. Once ready for harvest, it yields at least 12 ounces of buds per plant.

Have you ever smoked or grown your own Kaleidos Dope? Please let me know what you think about this marijuana strain in the comments below.