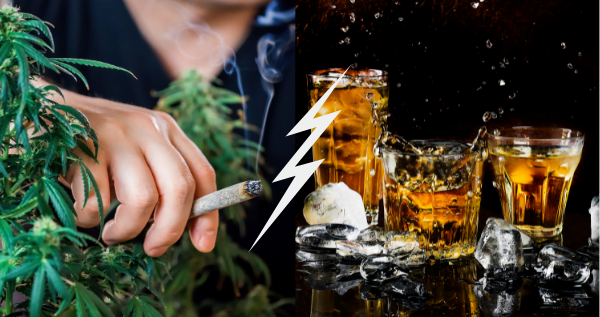 It is an age old question.  Which is better for you alcohol or marijuana?  Marijuana vs. alcohol is an argument that seems never-ending.

Marijuana and Alcohol: Which is Better?

Looking for a comprehensive guide to increase the success of your grow? Download our Grow Bible to become an expert marijuana grower!

It is arguable that neither is good for you.  A little education about both can go a long way in proving to you who the winner of this battle should be.

Both can get you in trouble with the law, one for possession whether you have hurt anyone or not, and the other usually for public disorder or even worse a fatal car accident.

It has been reported by many states that more people die from alcohol use over marijuana use.  The U.S. Centers of Disease Control and Prevention have reported that over thirty seven thousand annual deaths have been attributed to alcohol use by itself.

There is not one single record of anyone dying from the use of marijuana.  In fact, there isn’t even a category for deaths due to marijuana use.

Where overdoses are concerned, people have died from alcohol poisoning and there has never been a fatal overdose due to marijuana consumption.

Alcohol is very toxic to the human system.  Marijuana is actually used for the treatment of certain medical conditions and the least toxic drug.

You would have to endure thousands of multiple uses of marijuana to become ill enough to die versus only ten times the amount of alcohol it takes to kill a person.  Marijuana wins this round in the marijuana vs alcohol battle.

Concerning health costs, alcohol causes greater medical costs than marijuana.  In fact, marijuana is proven via medical studies, to improve the health of those that suffer from serious diseases and health issues.

No one has ever been told to drink a bottle of vodka to help aid a diseases versus marijuana.  The cost of consumption is vastly different, as well.  It costs more money to consume alcohol than it does weed.

Where brain damage is concerned, it is proven that alcohol causes brain damage and marijuana does not.  A common myth is that marijuana kills brain cells.

Recent studies are turning that myth around and debunking it too.  Marijuana has neuroprotective properties that protect your brain cells from harm.

Studies also prove that excessive drinking coupled with the use of marijuana have had less brain damage than those that drank the same amount and did not divulge in marijuana smoking.

As far as addiction goes, alcohol is more addictive than marijuana.  Alcohol use results in somewhat fatal withdrawal symptoms that make it difficult for a person to stop drinking.

Marijuana smokers have fewer symptoms of withdrawal difficulties.  Not to mention the behavior factor when it comes to alcohol abuse.  The tendency is to become violent with physical outbursts that harm others.  Marijuana sets a mind at ease and does not cause violent outbursts.

Alcohol has proven to cause risk taking behavior.  How many times have you heard someone say they needed a shot of courage?

Drinking has been used by many to convince themselves to do something unusual or not smart.  Marijuana on the other hand tends to set a mind at ease and puts them in a state of euphoria.

More emergency room visits are attributed to alcohol abuse rather than someone being high on marijuana.  Marijuana wins again in the latest bout of marijuana vs. alcohol.

Click here for even more information about the positive attributes of marijuana.

BACK TO TOP
Cleaning Your Pipe or Bong
Wildfire: Can Burning Marijuana Fields Get You High?
6 Chill Strains for When the Holidays are Stressing you Out

0 comments on “Marijuana vs Alcohol”