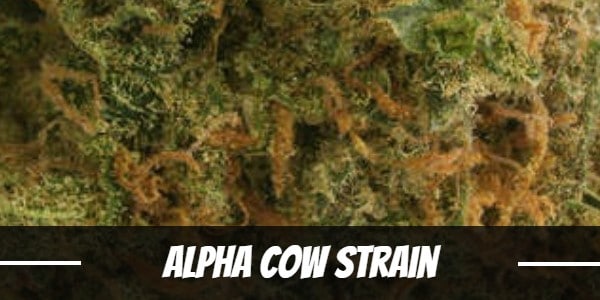 Alpha Cow is an absolutely elusive strain. In fact, to this day, only a select few have smoked it. However, those who have tried using it agree that it is a delicious bud with unique flavors of candied blueberry which terpene enthusiasts fully enjoy.

Not only that, its high THC levels of up to 22% delivers a mentally stimulating buzz which develops into an energizing body high during the comedown. It is also the same psychoactive compound that helps users cope with a variety of afflictions.

There are many speculations with regard to its breeder. Although, many believe the Sativa-dominant herb is a product of The Farm. Still, one thing is sure. It is a cross between Alpha Blue and Purple Cow. The former is an award-winning strain that develops colorful buds with red and purple hues. Meanwhile, the latter is a rare plant which delivers a dreamy high that sparks one’s creativity.

Immediately after the first puff, a rush of euphoria swarms the brain. It stimulates it and, at the same time, leaves users feeling happier from within. Often, too, the cheery disposition renews motivation as thoughts flow freely to form innovative ideas. But, for those who overuse the strain, the experience can be quite overwhelming due to thoughts racing in the mind.

Looking to buy seeds like Alpha Cow? Check out our marijuana seed bank.

After about an hour or two, an uplifting, trickling buzz trickles down from the temples. It soothes the body in waves and gets rid of tension in the muscles. Planting itself in the limbs is a surge of energy that reinvigorates users through and through.

Because of its great wake-and-bake qualities, Alpha Cow can be used in the morning ahead of a day of productivity. It can also be used early in the afternoons.

Alpha Cow is a pungent strain that emits a sweet blueberry scent even from its bag. Once opened, a tantalizing blend of toffee and crushed berries with a subtle floral undertone. Broken apart or combusted, a note of wet soil becomes apparent.

Like its scent, an assortment of berries floods the palate at the first puff of Alpha Cow. Blueberries, along with sweet toffee, accentuate the flavor when savored. However, on the exhale, an earthy aftertaste lingers in the palate.

Greening out is possible while using Alpha Cow. The symptoms usually range from a temporary dizziness or a mild headache, and a subtle bout of anxiety. At times, the heightened sensation can lead to a feeling of paranoia. Apart from one’s disposition before the high, another factor that contribute to such effects is overusing the strain. For this reason, users must use the bud with caution.

Cannabinoids interfere with the bodies’ ability to produce moisture in the mouth and the tear ducts. As such, it is not surprising for users to experience a cottonmouth and dry eyes. However, downing a few glasses of water will help manage the mild discomfort.

Presumably, Alpha Cow was created with a recreational goal in mind. After all, that has been the people’s assumption of marijuana use for the longest time. Still, the strain contains significant therapeutic value through the combined effects of its cannabinoids like THC, CBD, and terpenes.

The mood-enhancing high it induces, for example, provides a temporary reprieve against mental health issues such as depression or bipolar disorder. It positively affects outlooks and stabilizes turbulent emotions to help patients cope. Meanwhile, its calming head buzz makes for a great stress or anxiety reliever.

Stress also manifests in the body as in physical fatigue or exhaustion. Through the painkilling properties of its psychoactive compound, Alpha Cow appeases various aches in the body. The energizing effects also reinvigorates tired users.

There are two major factors to consider when growing Alpha Cow – location and climate. Sativas, and its hybrid offspring generally prefer the warm weather, constant sunshine, and long days of equatorial regions. In such conditions, it flowers fast and yields high.

This is not to say Alpha Cow does perform well in the colder weather of the northern hemisphere. In spite of the fluctuating hours of the day, the strain still blooms albeit a little late. For this reason, many growers prefer cultivating it controllable environments where it is easier to adjust lighting, temperature, and humidity to mimic a Mediterranean climate.

Indoors, Alpha Cow’s lanky structure necessitates an early topping to manage its height as well as staking for additional support of its stalks and branches. It should be trimmed now and then too. Not only will this improve light and air circulation, but also nutrient distribution since the plant no longer focuses on reviving dead parts.

Applying methods such as the Screen of Green and supplementing it with other Low-Stress Training techniques will encourage better trichome production. Meanwhile, using mediums like soil will bring out its delicious fruit-flavored terpenes. However, aspiring growers looking to produce ‘cleaner’ buds may opt for a hydroponics setup.

Typical of Sativa-dominant strains, Alpha Cow has a long flowering period of 10 to 12 weeks. Though the wait is long, growers harvest a hefty yield of 12 to 16 ounces of buds per square meter.

In the northern hemisphere, Alpha Cow blooms anywhere from the last week of October to the second or third week of November. Once mature, it yields at least 16 ounces of buds per plant.

What is the Alpha Cow strain yield?

How much THC does Alpha Cow have?

What are the origins of the Alpha Cow strain?

Alpha Cow was created from a mix between Alpha Blue and Purple Cow.

Have you ever smoked or grown your own Alpha Cow? Please let me know what you think about this marijuana strain in the comments below.