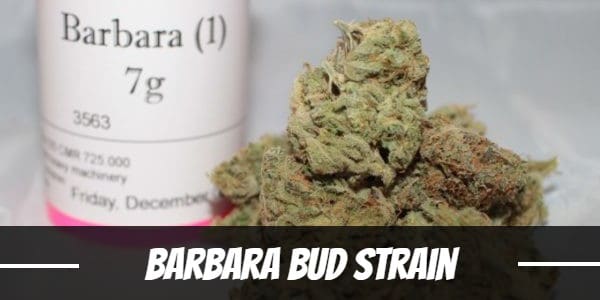 Barbara Bud is pretty. Her frothy buds covered with rich crystals is already an eye-popper, but the purple hues make it even better. Not to mention, this strain comes with a very delightful aroma. Beyond its appearance, it is also very potent strain.

A big part of its success and acceptance among cannabis users is its lineage. The House of the Great Gardener (H.O.T.G.G.) used an unusual hybrid and crossed it with a carefully selected landrace strain.

First, they picked an Afghani Indica. As many knows, pure breeds from the region near Pakistan is among the best worldwide. Then, they used it with an Indica-dominant hybrid Shishkaberry.

Barbara Bud, as a result, retains most of her Indica heritage. Furthermore, it also inherited other traits including its scent and high potency.

H.O.T.G.G. has another strained which they named after their cannabis eating cat Digweed. Hence, it should not come a surprise that this strain also took its name from someone or something. As it turns out, it appears to be named after a former CBC Radio One’s host, Barbara Budd. Whether the Canadian host/actress uses cannabis or not is unclear, of course.

Nonetheless, the strain itself does not need any association with a celebrity to achieve fame. On its own, it has already won or placed high in many awards.

Barbara Bud starts off by inducing an uplifting mental high. It is quickly followed by an energizing buzz that brings the feeling of elation. For most users, they begin to have a clear head and ability to better focus on their tasks. The gentle high of this strain is quite the motivator not only physically but also emotionally as happiness sets in.

Soon, the physical effects of Barbara Bud work its way to the body. Gradually, users start to feel their muscles relaxing. As mentioned, this is a highly potent strain. It does not take long before the ebbing buzz leads to a full-body relaxation.

Even when used in moderation, many of its users tend to feel lazy and reluctant to move. But use a little more than one can tolerate, then it is likely going to cause a couch-lock.

By all accounts, it does not induce psychedelic effects or mental confusion. While most people tend to have a sharp mind, the heavy-hitting body high may cause some people to go into deep introspection.

One of the traits that Barbara Bud inherited was having a pleasant odor, an influence of Shishkaberry no doubt. It has an earthy scent that comes with a strong note of citrus and a sweet fruity smell.

The same odor it emits is also very evident in its flavors. The fruity taste is also a more distinguishable blend of mango and bubblegum. Smooth on the throat, easy on the lungs, and more significant, Barbara Bud is deemed as delightful by most users.

So far, everything about the strain has been all about its positives. Being cannabis, it does come with adverse reactions such as dry mouth and eyes.

Before anyone decides to downplay its possible adverse effects, it is best to understand that this strain is not easy to handle. That is because it can cause people to feel anxious or have a headache. In most other strains, such conditions are a result of using too much. But in the case of Barbara Bud, it can occur when using within limits. As such, it is not the best strain for beginners to start with. Also, people who are predisposed to anxiety should avoid using it.

Finally, during the ebbing body buzz, it is possible that a few people may experience mild dizziness.

Unlike its sister strain Digweed (also bred by H.O.T.G.G.), Barbara Bud has a low CBD level. Still, it does offer more than a few benefits to medical cannabis users.

Looking to buy seeds like Barbara Bud? Check out our marijuana seed bank.

By uplifting the spirit and causing users to feel happy or even euphoric, it helps by eliminating stress. Once in full-body relaxation, it also helps as a pain reliever but only for mild cases. Because most users tend to feel sleepy, then it can also be an excellent aid to induce drowsiness among people who have trouble sleeping.

Note also that Barbara Bud can also stimulate appetite. Either the user get up to eat or wake up later (or next day) feeling like they have not eaten in a week.

Barbara Bud thrives in a warm climate with plenty of sunshine. Growers have a choice of cultivating it indoors or outdoors.

Growers may want to use hydroponics to speed up its growth. They will also have to do trimming and pruning to remove leaves. It then allows the grow light to reach the hard-to-reach areas or parts of the plant. Flowering time should be within seven to nine days with each square meter yielding 10 to 14 ounces of buds.

In the garden or the backyard, Barbara Bud is not likely to reach 2 meters tall. It should begin transforming to the bloom stage between September and October. Once ready, the conservative estimate of its yield is around 14 ounces per plant.

What is the Barbara Bud strain yield?

How much THC does Barbara Bud have?

What are the origins of the Barbara Bud strain?

Barbara Bud was created from a mix between Shishkaberry and Afghani Indica.

Have you ever smoked or grown your own Barbara Bud? Please let me know what you think about this marijuana strain in the comments below.