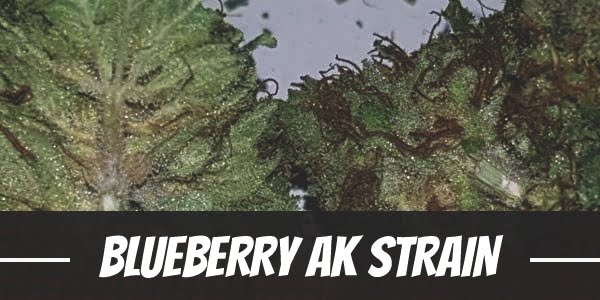 Blueberry AK is a stunning strain with blueish purple hues that look like the beautiful evening. Against it are trichomes that look like sparkling stars, signaling its high THC levels of 18% to 20%. When combusted and drawn in, this balanced hybrid delivers a head-to-toe high with great recreational and medicinal potential.

In creating the strain, the breeders used the Indica-dominant Blueberry. It delivers an Indica-leaning strain that soothes the muscles throughout the body. At the same time, it influenced its offspring’s hues. Meanwhile, AK-47 was later crossed with the former to add a stimulating head high that inspires a surge in creativity as well as an earthy and floral terpene profile.

Blueberry AK’s effects take a relatively short time to begin but it is quite subtle. Rather than an overwhelming onset, it introduces itself as a gentle rush of euphoria that starts at the mind then slowly trickles down to the rest of the body. It gradually intensifies with each toke.

A change in behavior is immediately noticeable once the effects settle. As moods are uplifted and enhanced, users smile wider, brighter, and more genuinely too. Compared to one’s previous disposition, it is clear that there is an innate sense of carefree happiness that lingers.

It should come as no surprise that users tend to look for some food nearby. After all, its stimulating head high also extends to the appetite. Having snacks nearby before taking a puff of the hybrid will save one a trip to the kitchen especially because of its upcoming body buzz.

Two or three hours after the first puff, a tingling sensation trickles down from the temples. It relaxes the muscles, soothing and calming as it surges throughout the rest of the body. In all likelihood, users will want to take a seat and rest or lounge around the couch.

Overall, Blueberry AK is best used in the evening. Its comedown tapers down into sleep as it plants a heaviness in the limbs. If used in moderation, however, enthusiasts can avoid the heavy-hitting effects that lead to slumber.

Blueberry AK has a fruity fragrance reminiscent of blueberries. It has a sweet overtone with spicy undertones of pepper and kush which intensify when the buds are broken apart. Once combusted, it releases a musky smoke lined with skunk.

Blueberry AK’s fruity terpene profile takes center stage in the palate. It entices the senses with the sweet but tangy taste of blueberries. Accentuating it is a blend of skunk and pepper that leave a spicy aftertaste in the mouth on the exhale.

Red eyes and a cottonmouth are two of the typical reactions of smoking marijuana. After all, it contains cannabinoids that interfere with moisture production in the body. Most experienced users ignore the dry spell due to its mildness, but beginners who experience discomfort may down a few glasses of water throughout the day. It can sometimes be accompanied by dizziness and a temporary headache as a result of overconsumption. Thus, one should always pace the dosage.

Chronic stress is a problem that people face on a day-to-day basis. If left to build up, it can lead to the early onset or exacerbation of various health issues including hypertension, depression, and high blood pressure. Hence, it is important to release stress to prevent accumulation.

To this end, Blueberry AK works perfectly. It delivers a euphoric high that improves moods and stabilizes conflicting emotions. Its soothing euphoria, on the other hand, calms the overwhelming dread it brings. Because of this, it not only works as a stress reliever but also an anti-depressant that manages symptoms of depression, anxiety, and other mental health issues like PTSD.

Its stimulating buzz also invigorates the body, including the stomach and one’s appetite. Hence, it is a source of comfort for patients dealing with eating disorders such as anorexia or cachexia. It encourages users to eat heartily especially after soothing any cramps that may cause turbulence in the stomach. Because of this, it can also be used by long sufferers of chemotherapy’s nauseating effects as an anti-emetic.

Feeling deeply relaxed, users eventually begin to feel drowsy. Its sedating properties not only lulls one into a deep, unencumbered slumber but also enhance the quantity and quality of sleep.

Blueberry AK has a hybrid structure. It is relatively tall with a strong frame that can withstand a variety of growing conditions. Because of this, it can be grown outdoors with relative ease. At the same time, breeders can also cultivate it in a controllable environment where factors such as lighting, temperature, and humidity.

Both the Sea and Screen of Green method work best with Blueberry AK. It has a relatively tall frame with a compact structure. Growers may install a screen on top of the canopy and weave the branches into the net while it is still transitioning to the flowering phase or brings the plants closer together in a single square meter. Either way, it will create more budding sites.

Another way to influence higher yields is to use a hydroponics setup, which delivers nutrients straight to the roots. It hastens the flowering period while improving bud creation. However, a grower’s skill matters most in the success of turnouts as going over the pH level can immediately stunt its growth.

Soil is a much better option for beginners. Not only is it easy, but it is also cost effective. Additionally, it encourages better terpene production. Because of this, strains grown in soil have a more distinct taste compared to other growing mediums.

Blueberry AK has an indoor flowering period of 7 to 9 weeks. It produces between 12 to 14 ounces of buds at harvest. However, growers can significantly improve yields by applying growing techniques.

In the northern hemisphere, Blueberry AK flowers between the last week of September to the middle of October. At least 14 ounces of buds can be expected from each plant once it fully matures.

What is the Blueberry AK strain yield?

Blueberry AK yields 12 to 14 ounces per square meter indoors and 14 ounces or more per plant outdoors.

How much THC does Blueberry AK have?

What are the origins of the Blueberry AK strain?

Blueberry AK was created by crossing AK-47 with Blueberry.

Have you ever smoked or grown your own Blueberry AK? Please let me know what you think about this marijuana strain in the comments below.