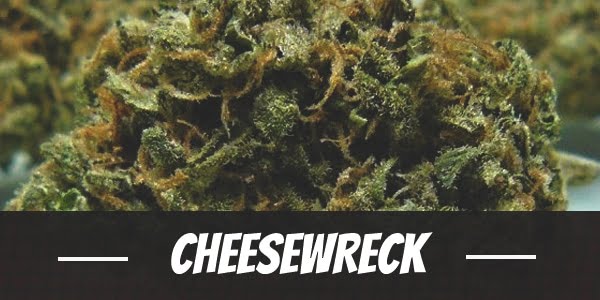 A savory, flavorful, and gooey cheese sounds delicious. For some, one bite of hot, melted cheese-filled pizza seems to be a great idea to appease the midday hunger pangs. While for others, a few tokes of CheeseWreck strain is all that is needed to turn a bad day around.

In developing CheeseWreck, Seedism Seeds paired TrainWreck with Cheese. The union resulted in a strain that delivers both mind zapping and full physical effects. It also comes with pleasant taste and smell.

Being a highly potent strain, the cerebral high can become pretty overbearing if used excessively. Like a speeding train, smoking it sends a rush that hits users fast and furious. For that reason, users and most especially the beginners will want to take it easy.

Used in moderation, CheeseWreck is a deviation from TrainWreck in that it is not likely to knockout users. However, that is not to say that it will not slam hard. With up to 21% THC, that is still an insane amount. In most cases, though, its effects can be described as dreamier rather than intense buzzing.

At its onset, an uplifting sensation speeds to the mind and the body. CheeseWreck is an incredible mood-enhancer in that it induces happiness and euphoric feeling. It promotes a clear-headed high that not only inspires creativity and ideas but also sharpens focus.

Instead of further intensifying to cause an intense cerebral buzzing, it seems that its Indica traits blends in nicely to keep it in check and stable. As a result, there is none of the racy thoughts or mind-warping high. In effect, users feel not only motivated but will gladfully finish tasks with relative ease.

Even as the physical effects kick into the body, all that it does is induce a sense of relaxation. In other words, it does not come with potent sedative-like properties that can make people feel too lazy or even lethargic. With that, users can best enjoy CheeseWreck during the daytime.

CheeseWreck stays true to its Cheese heritage in that it has a pungent sour cheese aroma blending with an earthy smell. Soon after breaking the bud, it releases a subtle hint of wood.

A little dank, its creamy cheese taste with a fruity note is unmistakable. However, some users may find its smoke a little bit rough.

Using CheeseWreck comes with some adverse effects. For one, users are likely to have cottonmouth, a fancy term for dry mouth. To a lesser degree, it can also cause dry eyes.

Other conditions that may occur include mild dizziness. Also, depending on individual tolerance or susceptibility, there are instances when a few people may feel anxious or paranoid.

Such conditions, if they do occur, are mostly ignored by users especially the experienced ones. About the only way to lessen its severity is to make sure not to use too much.

Without a doubt, CheeseWreck is an excellent marijuana strain for recreational users. Although it does not contain enough CBD to be an effective treatment for seizures and epilepsy, its psychoactive properties also have pharmacological values.

Like many others, one of the reasons why people use marijuana is to de-stress. As a mood-enhancing strain, CheeseWreck can certainly wipe out stress. Far more than that, it also has benefits for people who need a means to help them manage conditions like depression. In inducing happiness and euphoria, it becomes easier to deal with emotional or even psychological issues.

But the most significant benefit of using CheeseWreck is for pain relief. It has anti-inflammatory compounds that not only alleviate muscle soreness but also to lessen or eliminate the symptoms of pains that chronically ill patients suffer from and endure.

Finally, one thing that most users are likely to feel as a result of using this strain is hunger pangs. The same psychoactive properties that deliver its exceptional high are also stimulants. Hence, it has significant benefit for people who need to boost their appetite.

TrainWreck has a stretchy nature. By introducing Cheese and its Skunk lineage, this characteristic was kept in check. Hence, CheeseWreck is a much easier plant to cultivate than its predecessor. While it thrives well indoors using organic soil or hydroponics, it is even better when planted outdoors. Appearance wise, it produces light green flowers contrasted by flaming orange pistils with crystal-clear trichomes.

Because of its pungent odor, privacy may be an issue. For that reason, most people opt to cultivate the plant inside the house. Even so, air is ventilated out. Hence, growers will want to install an odor eliminator such as a carbon-activated charcoal filter.

Under the best indoor conditions, the flowering period often falls between 9 to 10 weeks. It is quite a generous producer in that it can yield up to 16 ounces per square meter.

Outdoors, CheeseWreck will reward its users with a massive harvest. By the end of October, each plant will have produced at least 16 ounces of buds and possibly more.

Have you ever smoked or grown your own CheeseWreck? Please let me know what you think about this marijuana strain in the comments below.