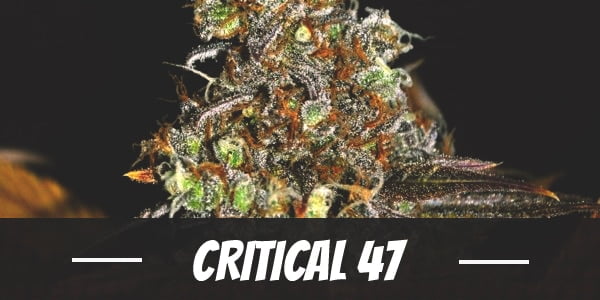 Here is the reality. There are far more recreational users than medical users. Of course, that is not to say that there is going to be a significant increase in medical users once more countries legalize its use. At any rate, one of the top reasons for using marijuana is because of its unusual effects. In the case of Critical 47, though, it is more suitable for medical purposes.

It still offers significant benefits in recreational usage. For instance, one thing it does well is to induce body relaxation. For that reason, it is perfect for chilling out or relaxing at the end of a long day.

Positronics Seeds is the original breeder of Critical 47. It is an outfit that started in Netherlands until they moved to Spain. The company itself has a reputation for growing high-quality cannabis. As such, we expect nothing but excellence in any of its hybrids. One such strain is Critical 47.

Positronics used two strains to create Critical 47. One is Critical Mass that originated from Skunk No. 1 and an Afghani Indica. One of the most notable things about Critical Mass is its enormous buds.

Another strain used is AK-47. Not only does it have an infamous sounding name, but it also carted away several awards in different years. Among the most prestigious is the High Time Cannabis Cup. In this instance, the strain delivers a mellow mental buzz that makes it highly attractive for recreational use.

By crossing the above-mentioned hybrids, Critical 47 has taken some of their best traits and now delivers an incredibly relaxing experience.

Critical 47 delivers an intense yet gentle cerebral effect. After a few tokes, it starts to kick in with a mellow buzz that does not cause users to feel hazy or even dizzy. Instead, the uplifting sensation causes users to feel happy. As such, many will soon find themselves feeling sociable, talkative, and have occasional bouts of laughter.

Its Indica side, meanwhile, creeps down on the body almost unnoticeably. As it starts to make its effect felt, by then most people are already in a relaxed state. One of the best things about Critical 47 is in its smooth blending and seamless transition.

Should some people use a little bit too much, though, the strain will likely induce a numbing body high. In that case, users will find themselves feeling sleepy and fall into deep sleep.

Critical 47 is one of the better smelling strains in the world. It has a very distinct sweet and pungent odor of earth that is not overbearing. At the same time, it is also accompanied by a whiff of fruits and vanilla. One thing growers will need to understand is that it has a strong odor. As such, growing outdoor may be problematic if there are nosy neighbors.

Not only does the strain come with a delightful scent. It carries over to its flavors too. Although it is less pronounced, the addition of a blend fruits and honey makes it pleasant. It is also accompanied by a dank aftertaste.

Like any marijuana strains, using Critical 47 can also lead to some negative reactions. For instance, experiencing throats and eyes drying is common. It becomes more pronounced as users use more. Furthermore, some people may feel a slight dizziness especially during the onset of its cerebral effects.

Using marijuana comes with responsibility. Among the most important things to remember is never to use too much. Doing so can cause a particular strain to overwhelm users. Not only does it make the reported adverse reactions worse, but it also may cause other unwanted effects.

Critical 47 is one of the best strains if one were to seek relaxation. As such, it is useful in managing stress and depression. Mental health disorders including PTSD can also benefit from its use.

Besides its ability to affect positive behavioral changes or reactions, Critical 47 can also help with pain relief. As users tend to fall into a deep state of relaxation, it also relieves the symptoms of pains caused by different chronic illnesses. The same relaxation can, for example, help people dealing with cramps.

Finally, after an hour or two of incredible effects, it will start to wear off. At that point, it is likely that most users will find themselves sleepy. Insomniacs should have Critical 47 on their bucket list.

Critical 47 is not a hard plant to grow, but it will need growers to have some prior experience. It does not grow too tall and tends to produce several branches with jungle green leaves. It also inherited the trait of Critical Mass in producing large and heavy buds.

It grows well outdoors in a warm climate, but it will tolerate cooler temperatures. As for growing it indoor, growers can choose between soil or hydroponics.

Growers should delight in the fact that Critical 47 is ready for the flowering phase in as early as seven weeks. After two or three more weeks, each square meter should have a yield of 14 ounces.

In an open environment, the plant thrives very well. In fact, each plant can produce 18 ounces or more of buds. It should be ready for flowering during the last week of September.

Have you ever smoked or grown your own Critical 47? Please let me know what you think about this marijuana strain in the comments below.