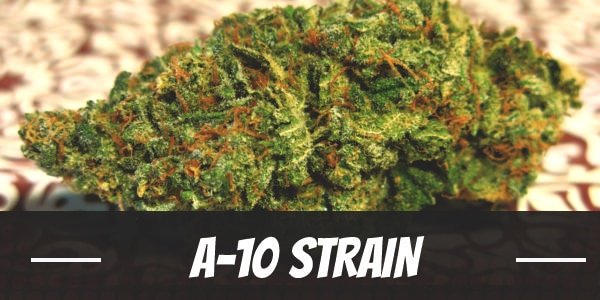 Crossing different cannabis varieties is not new to the cannabis world.

In fact, this is how breeders conceptualize and eventually develop a new strain that has all the best qualities of the two or more different strains being crossed.

Information about A-10 marijuana strain:

However, this practice does not mean that purebreds are anything less than impressive on their own.

Landrace strains, as they are more appropriately called, are cannabis varieties in their purest form.

Every cannabis variety we know today has roots that can be traced back to the different landrace strains of the world.

Hence, some breeders choose to simply bring out certain phenotypes of landrace varieties instead of breeding them with other types of strains to produce a whole new strain with a more complex profile.

One good example of such phenotype variety is the A-10 strain.

This pure Indica boasts of the most desirable traits of its lineage. Read on and find out more about this strain.

A-10 is believed to be a phenotype of the Afghani landrace. The information about it original breeder is a bit vague.

However, a popular theory involves one breeder in the name of Ed Rosenthal.

He is said to be the man behind the creation of the A-10 strain.

A-10 is a pure Indica strain with an above average maximum THC concentration of 19%.

This strain is best known for its strong yet relaxing body buzz that can quickly overwhelm users especially those with who overindulge on the strain.

We don’t currently sell A 10 seeds. Check out other indica dominant seeds in our marijuana seed bank.

To be more specific, the physical high of A-10 is characterized by a heavy body stone that brings about a sense of deep relaxation.

The strain effortlessly induces sleepy and lethargic feelings which can potentially have users locked on the couch a few minutes into the high.

However, the effects of A-10 are sometimes associated with a few signs a cerebral stimulation that can be manifested in the way users feel more happy and creative than usual.

In rare occasions, users may also get the munchies while smoking A-10.

These facts, including the strain’s more prominent physical high, makes A-10 an ideal strain choice for an evening medical or recreational use.

A-10 has the classic kush aroma that is reminiscent of an earthy hash scent.

This is usually accompanied by some juicy undertones, making its overall scent quite an appealing sensation to seasoned users.

The same Kush traits can also be detected in how the A-10 strain taste like.

To wit, users will notice the same earthy and hashy attributes that will produce a smooth smoke with some fruity hints later on.

This combination of flavors makes the A-10 a quite an enjoyable strain to use.

A-10, just like any typical cannabis variety, can also cause some significant side effects among its users.

In this case, it is more likely to result in dry mouth and may occasionally be accompanied by signs of dry eyes.

Due to its lack of cerebral effects, the strain has a lower chance of causing of paranoia, dizziness, and headaches.

However, users may still have to be mindful of these reactions especially when it comes to deciding one’s dosage preference.

We don’t currently sell A 10 seeds. Check out other indica dominant seeds in our marijuana seed bank.

Although A-10 is not the best cannabis variety for patients with epilepsy, seizures and other illnesses with the same symptoms, it still has the right combination of THC and CBD concentrations to pr3ovide adequate relief to other health conditions.

For one, it is best known for its impressive ability to relieve stress and induce sleep among insomniacs.

At the same time, the relaxing and analgesic properties of A-10 can help provide temporary relief to chronic pain brought about by migraines, muscle spasms, PMS, and the like.

Moreover, as the strain’s Afghani lineage is known for its ability to stimulate hunger, A-10 may also be helpful to patients with eating disorders or those that has developed a poor appetite due to certain health conditions.

There is no definite information about A-10’s cultivation. Nonetheless, we can always refer to its Afghani lineage to determine the strain’s possible growing behavior.

On that note, here is some information about Afghani’s cultivation that prospective growers of A-10 should know.

Afghani is easy to grow both in an indoor or outdoor setting. However, outdoor cultivation requires a sunny or Mediterranean climate.

The strain can take as long as 45 to 55 days to flower indoors and once the nugs are ready for harvest, growers should end up with a rewarding amount yield of about 15 ounces per square meter.

For its outdoor cultivation, however, the buds are usually harvested around late September to early October with an overall yield of around 17 to 22 ounces per plant.

As previously mentioned, prospective growers may need to refer to the growing behavior of Afghani itself to make educated assumptions about A-10’s cultivation.

Hence, the strain can have, more or less, the same indoor flowering period of about 45 to 55 days and a yield that can reach 15 ounces per square meter.

Since Afghani is typically harvested during late September to early October, there is a big chance that A-10’s nugs should also be harvested at around those months.

The same applies to the strain’s possible outdoor yield. Afghani is known to produce as much as 22 ounces per plant, so there is no reason why A-10 should produce any less than that.

FAQ About A 10 Strain

What are the origins of the A 10 strain?

A 10 was created from an Afghani

Have you ever smoked or grown your own A-10? Please let me know what you think about this marijuana strain in the comments below.