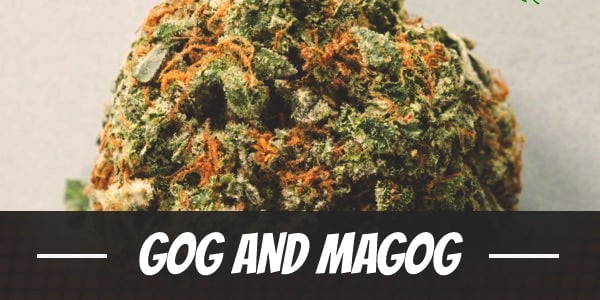 Gog & Magog has an interesting backstory. Developed by the Israeli company Tikun Olam, its name references both the Bible and the Quran. Although it is easy to dismiss it as simply picking up random names, understanding the reason for the reference seems apt when one also considers its benefits.

Information about Gog and Magog:

There are several interpretations but because the company is based in Israel, let us stick to the Jewish version. Here, the Messiah is supposed to defeat Gog & Magog. Once that happens, then it ushers in the Age of the Messiah.

Now, Tikun Olam is on a mission to develop medical cannabis strains to help people with chronic illnesses. Indeed, they have already released several such hybrids. For instance, Avidekel and Rafael both contain 1% THC while having as much as 18% CBD. But there is also a need for strains with higher THC content and the Gog & Magog strain is one.

For years, the company has been researching and doing studies on THC and CBD. It is likely that they found a process in which even if their strains come with higher THC, it does not seem to have very pronounced psychoactive properties. For recreational users, it can be good or bad depending on individual preferences. After all, some people still want to experience extreme effects. But others want the benefits without feeling overwhelmed.

As for the medical cannabis users, the comfort brought about by the use of marijuana is well-documented. Rather than enduring constant pain, Gog & Magog can provide relief as well as induce an overwhelming sense of happiness.

As one can see, the reference to the bible alludes to the strain that defeats the discomforts.

Information about Gog and Magog:

For the uninitiated, having a high THC may seem to be a thing that recreational users look for because of the intense high it delivers. But there are also medical benefits with higher potencies. We are not sure if Tikun Olam has found a process in which their strains do not seem to cause psychedelic or narcotic-like effects.

Gog & Magog is an 80% Indica strain. As such, one can expect its effects to be more on the physical side. Even so, it still provides mental and behavioral effects that Sativa lovers have come to appreciate.

At its onset, users feel the calming but invigorating sensation flowing into their mind and body. Not only do people using Gog & Magog feel uplifted, but some may also end up euphoric. This is also followed by a heightened sense of focus as the mind seems to be clearer.

Gently, the strain starts to creep into the body. As the soothing effect begins to take over, users feel more and more at ease until they reach a point where they are completely relaxed. Obviously, the shift in the mind and mood play a role, but it is also the anti-inflammatory and mild sedative-like properties that also aids in the overall sense of good feeling.

Gog & Magog is meant to be used at the end of the day, and for patients, to help them fall asleep.

The strain emits a pungent odor of fresh earth with a skunky note. It also has the scent of herbs thrown into the mix. Generally, users will find its aroma very pleasing. Based on its smell, it would not be surprising if some people deduce that Skunk must be present in its lineage.

The skunky aroma is present in its flavors as well as a note of herbs and citrus. To make it easier or rather, smoother, it also has a lingering spicy aftertaste.

Typically, strains that possess a high THC also comes with several notable side effects. Dry eyes and mouth are common with the use of cannabis that it is almost negligible.

In the case of other strains, they may cause people to have an elevated level of anxiousness, feel paranoid, have a headache or feel dizzy. That is not the case for Gog & Magog as these conditions have not presented itself to users.

The biggest benefit of using Gog & Magog is for pain relief. People with chronic illnesses will have to endure constant pains and aches. Once the effects of the strain are in full force, medical users should find comfort. Among the diseases that the company developed this hybrid for are inflammation, nausea, and glaucoma.

To a certain degree, because it induces body relaxation and combining that with the uplifting mental high, it is likely to be useful in defeating stress. In turn, this helps pave the way for people to manage their depression or other mental health issues.

Because it calms the muscles and helps release the tension from the body, users feel completely relaxed. It follows then that they are likely to feel drowsy and go on to sleep.

Tikun Olam is not selling the seeds of Gog & Magog. Instead, customers can only buy it in a few of their partner stores. At any rate, this Indica-dominant plant likely grows in a semi-humid to warm environment.

Most probably, this plant has a flowering time of 7 to 9 weeks. Each square meter potentially can produce up to 16 ounces of buds.

There is no reason to doubt that the plant can thrive outdoors. A reasonable expectation of its yield per plant would be at least 12 ounces.

Have you ever smoked or grown your own Gog and Magog? Please let me know what you think about this marijuana strain in the comments below.

0 comments on “Gog and Magog Strain”