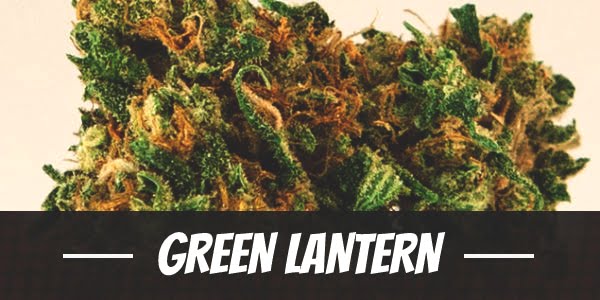 Green Lantern has the power to inflict devastating cerebral effects. On how it came to have that ability, it remains vague. Even its original breeder is unknown. There is, however, a consensus that it is an offspring of Green Crack and White Rhino.

In a sense, the fact that there were speculations on its lineage over the years is a testament to its quality. After all, people do not talk about obscure and unworthy strains. Green Lantern, though, is different. A mostly Sativa plant, much of its structure is a reflection of the notorious Green Crack. Both share similarities in delivering intense energetic and focused effects. Such traits have evidently endeared it to fans of intense mental stimulations.

Unlike Green Crack which is Sativa through and through, Green Lantern also follows up the cerebral high with a mild and soothing body effect. If indeed it is true that White Rhino is in its genes, then that explains yet another notable characteristic – therapeutic traits.

Green Lantern is not widely available. Despite its elusiveness, it has stood the test of time since making its first appearance that could be as early as the 60s. Although seeds are not available, the flowers appear in dispensaries from time to time. One thing that should be noted is that there is at least one variety bred from other lineages that goes by the same name. An example is a hybrid created using a three-way cross between OG Kush, Purple Urkle, and Killer Queen.

Green Lantern may take a bit of time after a hit before users feel its effects. Granted that it contains up to 28% THC, the mental stimulation does not slam people hard but instead comes in increasing intensity.

Not long after the onset, Green Lantern causes people to feel sensitive to the surroundings. Even with the buzzing high, these heightened senses also translate to an uncanny ability to focus. Similar to caffeine, the strain also provides a boost in energy. It can indeed keep people motivated and locked on completing tasks or chores.

Apart from mental effects, the strain can also alter behavior. Its ability to enhance the mood and induce happiness can brighten up the day. Most people, at this point, find themselves not only sociable but also could be too talkative. Gradually, over time, a subtle, soothing body high follows and complement these exceptional cerebral effects.

At times, some people may succumb to the devastating power of Green Lantern. Its psychedelic high may be too intense. In this case, one could experience changes in depth perception. Visual distortions could also occur in which sound is amplified, and colors become vivid. Instead of being on the go and staying active, users fall into deep introspection.

Green Lantern has a lemony and earthy fragrance that is accentuated by an overtone of pine. Breaking the bud, it also emits a spicy note.

Its profile is most citrusy with a strong note of pine. Once exhaled, it leaves a peppery, spicy aftertaste. While the taste itself is pleasant, its smoke is on the harsh side causing some people to cough a little.

Green Lantern comes with some nuisances. Typical of marijuana use, dry mouth and eyes are both customary. Its intense and buzzing effects can cause some people to feel dizzy too. Once users exceed tolerance limit, it has the potential to induce mild paranoia or anxiety.

If there is one thing that this strain can do apart from the soaring high, then that is hammering stress to oblivion. The mood-enhancing properties of Green Lantern can also greatly benefit people with depression.

One other way that people use it for medical reasons is to alleviate the symptoms of pains. A natural painkiller, it offers a reprieve from headaches as well as body aches due to chronic illnesses.

Using this strain causes people to feel hungry and crave for food. As such, it works as an excellent appetite stimulant.

Green Lantern should thrive in a dry and warm climate. Due to its structure, it can naturally provide more yield than typical Indica plants. However, that is also because of a more extended flowering period.

Grown indoors, most people are likely to opt for hydroponics. And, in combining it with stress training, it can help shorten the growth rate while further improving the yield. In the outdoors, the plant could reach more than 3m tall. Preferably, it should not be in an environment where there might be sudden changes in the temperature.

Unfortunately for home growers, the seeds of Green Lantern are not available.

Shortening the flowering period to 9 weeks is possible. Even so, it is best to give it a week or two before harvesting. Its yield should be better than average with some 12 to 16 ounces per square meter.

At the latest, growers should harvest the flowers no later than early November before it gets too cold. Each plant should produce some 16 ounces of buds.

Have you ever smoked or grown your own Green Lantern? Please let me know what you think about this marijuana strain in the comments below.