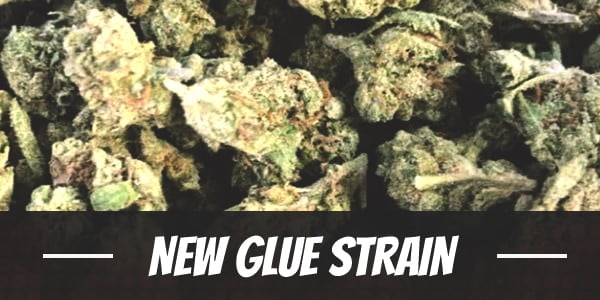 The Gorilla Glue family is among the most famous in the cannabis industry. Among its newest additions is Gorilla Glue #5, commonly known as New Glue.

Sitting at 27% to 31% THC, New Glue is one of the most potent strains to ever hit the market. It delivers a quick-acting high in spite of its Indica-dominant genes in only a few puffs. At the comedown, it thoroughly soothes the muscles until one is glued to the bed in deep relaxation. Of course, nothing short is expected of the Original Glue and Sister Glue cross.

Overall, New Glue can be used at any time of the day. Low dosages are perfect for mornings and early afternoons as it subtly stimulates the mind. On the other hand, its heavier body melt is a great companion for relaxing evenings after work. However, consuming beyond limitations can lead to a couch lock.

Although New Glue leans toward Indica, its initial effects are reminiscent of Sativas in that it is not only cerebral but also relatively quick. In less than 15 minutes ater the first two or three puffs, users experience a gentle head rush that is barely noticeable until after it has settled.

During the onset, an uplifting head high leaves users feeling happy. It fills the mind with cheerful thoughts while enhancing the mood. A behavioral change most likely manifests, especially as frowns turn to broad smiles that stretch from ear to ear.

Having food nearby is highly recommended. The euphoric head buzz stimulates the appetite and entices users to scour the kitchen for some delicious snacks. However, one may not have a chance to grab a bite once its heavy-hitting body effects hit.

After about an hour or two, a light pressure travels down the temples to the rest of the body. It relaxes the muscles in soothing waves, releasing built-up tension. In all likelihood, users will fall deeply asleep as the heaviness continues to weigh down on the limbs. However, in moderation, the stimulating experience is an arousing experience that makes for a great bedtime companion. Its aphrodisiac qualities ensure a good time between lovers.

New Glue is a pungent strain with a sour overtone. It has strong notes of diesel that can easily fill the room once a bag of its buds are opened. Breaking apart or combusting the bud, on the other hand, reveals its earthy undertones that soften the acrid smoke.

Just like how it smells, New Glue has an acrid smoke that fills the mouth with a sour diesel flavors. Complementing it is the taste of wet soil that balances out the tanginess. On the exhale, it leaves an aftertaste of freshly picked fruit.

Dry eyes and a cottonmouth are two of the most common reactions to smoking cannabis. It is usually the result of cannabinoids interfering with moisture production. At times, it is accompanied by dizziness if symptoms persist. Usually, though, it lasts only for a few hours and is barely noticeable.

Paranoia is also a possible reaction to using New Glue, especially when used beyond tolerance levels. Although it is limited to a headache most of the time, the bud must always be used in moderation.

New Glue’s highly potent THC content delivers more than just a powerful recreational high, it also offers various therapeutic benefits. Its happy high, for example, stabilizes turbulent emotions. And, while uplifting the mood, it replaces feelings of hopelessness with a newfound zest for life. Because of this, it works well as an anti-depressant that manages symptoms of depression, anxiety, and PTSD. Not only that, its energizing buzz reduces stress levels.

One of the best times to eat New Glue is right before a meal. Its stimulating properties encourage a vigorous appetite that allows one to eat heartily. Thus, patients dealing with eating disorders such as anorexia or cachexia can turn to the strain for comfort. It can also relieve the aches and pains such as cramps that terrorize the body  with its muscle relaxing qualities.

Feeling thoroughly relaxed mentally and physically, users eventually feel a heaviness in the limbs. The eyes eventually droop as one starts to feel drowsy. In all likelihood, its sedating properties will prompt an earlier bedtime while improving the overall quality and quantity of sleep.

New Glue is not the best beginner’s choice. It is only available as a clone, meaning it is a cutting from the mother plant. Hence, it is prone to various diseases especially when it has not taken root yet. It can die easily due to insufficient nutrients or humidity-related problems like mold, mildew, and root rot.

It works best with the Sea of Green due to its branchy and compact structure. Growers can plant at least four of the strain together to improve yields. Pairing it with a hydroponics setup, which delivers nutrients straight to the roots, hastens the flowering period and possibly double yields. Soil as a medium will significantly improve flavors and fragrances.

After flowering for 7 to 9 weeks, New Glue produces between 10 to 12 ounces of buds per square meter.

In the northern hemisphere, New Glue flowers between the last week of September to the middle of October. It yields at least 12 ounces of buds per square meter.

What is the New Glue strain yield?

How much THC does New Glue have?

What are the origins of the New Glue strain?

New Glue was created from a mix between Sister Glue and Original Glue.

Have you ever smoked or grown your own New Glue? Please let me know what you think about this marijuana strain in the comments below.