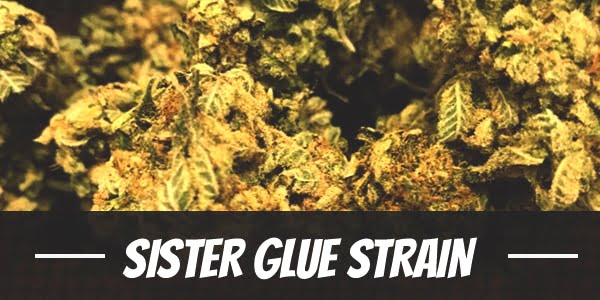 Sister Glue is an extremely potent strain. Its THC levels average from 26% to 28%, which place it at a level above most recreational buds in the market today. Apart from its potency, its main selling point is its combination of effects. Its onset starts with a light euphoric rush that intensifies into a relaxing buzz. From head to toe, it envelops users in a stress-crushing high that turns one’s day around from bad to good.

It was originally called GG#1, or Gorilla Glue #1, but was later changed to Sister Glue for better distinction. Hence, in looking for the strain, one may search for its other nickname as well.

Sister Glue has a relatively quick onset that manifests within minutes after the first two to three puffs. It starts as a cerebral euphoric rush that starts gently before gradually building up with each puff. Because of its potency, users should make sure to use the strain in moderation.

Its onset starts with a uplifting buzz that clears the mind and enhances the mood. The behavioral change it brings is immediately visible once it sets. Broad smiles etch itself on the face while happy memories replace worrying thoughts. It leaves users feeling happy throughout and beyond the session.

After some time, a light pressure from between the temples. It trickles down in waves, oozing and calming each muscle it passes. Planting itself in the limbs is a heaviness that intensifies with each passing hour. In all likelihood, it will deeply and thoroughly relax users throughout the high.

In spite of its subtle stimulation, Sister Glue is better used at the end of the day. Its comedown has a heavy-hitting quality that leaves users flopping on the bed, feeling completely drowsy. Eventually, as the effects persist, one travels down gleefully to the land of dreams hand-in-hand with Mr. Sandman.

Sister Glue has an inviting earthy scent with overtones of freshly picked flowers. It has undertones of refreshing pine that intensify once the buds are broken apart. Upon combustion, there is a hint of tangy but sweet lemons that permeates in the room.

The subtle sweetness from the smoke entices the palate with its subtle floral and ripe lemon undertones. When savored, it develops into a strong overtone of wet soil. On the exhale, it leaves a refreshing aftertaste of pine that washes over the mouth.

Apart from the usual red eyes and cottonmouth, it is possible to experience a disorienting dizziness that triggers anxiety when smoking Sister Glue. In worst case scenarios, it can develop into a feeling of paranoia. Albeit subtle, it is best to use the strain moderation to prevent it from exacerbating or occurring. The dry spell is inevitable though. And, in such cases, users may down a few glasses of water throughout the day to manage the symptoms.

Sister Glue is a strain with multiple medicinal benefits. Through its many cannabinoids, especially THC, CBD, and terpenes, it provides reprieve against a variety of mental and physical health afflictions.

It relieves stress through its happy high which improves moods and uplifts spirits. At the same time, it manages symptoms of mental health issues including worrying thoughts, feelings of hopelessness, and overwhelming dread. For this reason, long-sufferers of depression, anxiety, and PTSD can turn to the strain as a source of comfort.

One of the best times to use the strain is a few hours before a meal. It brings back the appetite while reducing cramps in the stomach that prevent one from eating heartily. Hence, it is a great companion for patients dealing with cachexia or eating disorders like anorexia.

The same psychoactive compound also turns into a natural analgesic. It dulls aches throughout the body beginning from the temples by soothing the muscles. In doing so, it relieves spasms that contract uncontrollably and painfully.

At the comedown, its sedating properties take effect. It hastens the onset of drowsiness and, once asleep, users are tucked into bed for a deep, unencumbered slumber. Sister Glue also enhances the quality and quantity of sleep so one wakes up the next day feeling energized.

In spite of its Indica leaning genes, its growing pattern is similar to that of a hybrid. It is relatively tall with thin branches and a thick stalk. However, it is not an easy strain to grow.

The plant, being available only as a clone, is sensitive especially in the first few weeks of its growing phase. It is susceptible to disease and should be in the care of a seasoned grower for better chances of a successful grow.

Because of its structure, it is a great candidate for the Screen of Green method. Once it creates a root system, growers may install a screen a few inches above the plant then weaving the branches into the net. Pairing it with a hydroponics setup will significantly increase yields and hasten the growing period. However, using soil as a medium will produce more flavorful buds.

Sister Glue has an indoor flowering period of 7 to 9 weeks. It produces 17 to 20 ounces of buds per square meter once ready for harvest. Growers can further improve yields through training.

Sister Glue flowers after 7 to 9 weeks. Growers can expect a high yield, averaging between 20 to 21 ounces of buds per plant at harvest.

Have you ever smoked or grown your own Sister Glue? Please let me know what you think about this marijuana strain in the comments below.