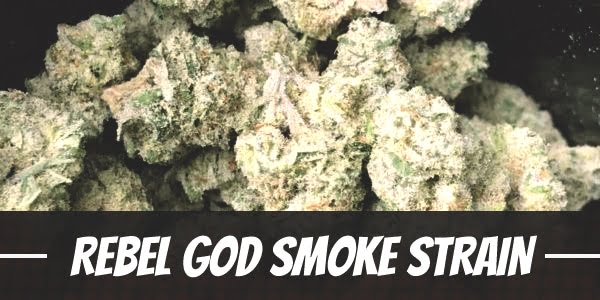 Rebel God Smoke is a choice thrill seeker’s treat. It delivers a soaring euphoria that improves the mood from zero to a hundred within minutes. Patients may also find an uncanny companion in the bud as a healing companion. Not only that, because it is highly potent, a few tokes go a long way and last for hours at a time.

Cinderella 99, or Cindy for short, is a sweet-tasting Sativa. It delivers a quick-acting euphoria that soars the mind to greater heights. Gupta Kush, on the other hand, delivers a heavy-limbed Indica buzz that settles into the limbs to relieve pain all over the body. Interestingly, both produce short bushy plants that perform well in the norther hemisphere.

Hailing from two well-regarded breeding strains, Rebel God Smoke is also impressive in the grow room. It is beginner-friendly, easy to grow, and quick-flowering. These traits are not for naught either. The triple threat is completed by its vigorous yields.

With a THC of 20% to 28%, Rebel God Smoke could easily topple down the most experienced of users. Thus, moderation is a key part in ensuring a pleasant high. Otherwise, one may end up stunned in place, swamped by the sensory overload.

Minutes after the first few puffs, a rush of euphoria eliminates the negativity. It turns the day around as it uplifts the spirits, planting an innate sense of happiness that refreshes the mind. Complementing it is a surge of energy that raises motivation.

Casual users will find that it is an excellent choice for a morning wake-and-bake and mid-afternoon treat. It wakes tired souls from lethargy, ensuring a productive day ahead. Using it in the evening, however, may keep one awake at night – unless, of course, that is one’s goal.

Rebel God Smoke has a citric aroma that enthralls the senses even at the first whiff. It has hints of grapefruit and squeezed lemons. Further enhancing its profile is the aroma of earth, red currant, and cabernet.

As always, the inevitable dry eyes and cottonmouth combo will strike users who toke Rebel God Smoke or any other strain for that matter. It is a typical side effect that is brought about by cannabis’ moisture-inhibiting cannabinoids. Moreover, it is mild and easily manageable through hydration.

Rebel God Smoke is more than just another overpowered recreational strain. Its potent psychoactive compounds also have immense therapeutic qualities that provide a reprieve against mental and physical health issues. Among its best uses, in fact, is targeting the various manifestations of stress.

It delivers an uplifting head high that quickly improves the mood as it hits. Meanwhile, its soothing buzz relieves fatigue. It releases tension all over the body, kneading the muscles into relaxation. No doubt, it will leave users feeling stress-free.

Patients could also use it as an alternative painkiller. It has natural analgesic properties that appease various aches and pains regardless of the source, frequency, and intensity. Hence, it is a source of comfort against symptoms of arthritis, joint pains, and cramps. Similarly, its ability to reduce contractions also manages nausea which helps people undergoing chemotherapy.

It keeps patients in an upbeat mood too. It clears the mind, melts away worries, and keeps one positively distracted – away from the psychological distress that comes with the suffering. Thus, it could also be of use as an anti-depressant, anxiolytic, and anti-psychotic.

Sativas are often sensitive plants that are difficult to grow in the northern hemisphere. To this end, Rebel God Smoke could be ruled out as a special case. It is an exceptional performer in the grow room that boasts a sturdy frame, high resistance to common pests and diseases, and a short-flowering time that rarely takes up to 8 weeks. Not only that, it does not sacrifice yields – making it an excellent companion for beginners.

It could be grown virtually anywhere, but many home growers prefer small, dedicated tents or rooms. It provides full control over many deciding factors such as lighting, temperature, and humidity. For instance, provisions could be made for a dedicated fan that will increase air flow, strengthen stalks, and manage heat levels. 600-watt HID light fixtures could also be installed during the flowering phase to improve bud production. As for reducing moisture in the air, a proficient ventilation system will do.

Advanced growing techniques could also help improve the plant’s performance. The Sea of Green, for instance, will shorten the flowering period and coaxes the main cola gently so it does not succumb to elemental factors. Aside from the support it provides, it also helps distributes light evenly. With more energy, the budding sites produce higher yields.

The average Sativa-leaning strain takes 10 to 12 weeks to flower. Thus, Rebel God Smoke comes as a shocker as it usually takes up to 8 weeks. Not only that, yields are high with each square meter producing 12 to 16 ounces of buds. Growers are free to adjust the blossoming phase by a week to further improve yields.

In the northern hemisphere, flowers fully bloom very early – from the second to the third week of September to the early days of October. This produces a minimum of 16 ounces of buds per plant once it is ready for harvest.

Have you ever smoked or grown your own Rebel God Smoke? Please let me know what you think about this marijuana strain in the comments below.