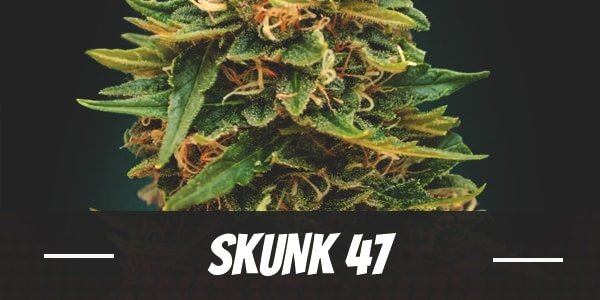 It is easy to mistake Skunk 47 for a pure Indica especially at the sight of its structure. It branches out laterally, produces vigorously, and fits most growing spaces due to its naturally compact stature. Its buds, too, exhibit the same qualities. In spite of its smallness, it is densely packed and totally covered in a thick coat of trichomes.

In many respects, Skunk 47 is much like its parent Skunk No. 1. From the world’s first breeding strain, it inherited a distinct Skunk profile, pronounced psychedelic effects, and high yields. These traits were later enhanced by adding in a male AK47, a quick flowering herb with a delicious tropical taste. Moreover, both are descendants of indigenous varieties.

Nothing short is to be expected from the World of Seeds product. Years of research from a team of geneticists, chemists, ecologists, and breeders helped create a versatile line of potent cannabis. For this reason, Skunk 47 retains just as much therapeutic value for users in the medical community as it does recreationally.

Typical of a predominantly Indica strain, Skunk 47 starts slow but intensifies after each puff. Usually, its onset is rarely noticeable but those who take note of its psychedelic effects report a gentle rush of euphoria spreading all over the mind that leaves users feeling happy.

After about an hour or so, the Indica effects of Skunk 47 begin to manifest. It starts with an uplifting buzz that trickles down from the temples to the rest of the body. Soothing and calming, the light pressure eases the muscles until one is enveloped in full-bodied relaxation. In all likelihood, a heaviness settling in the limbs anchors users to their couches.

Eventually, many drift off to dreamland. Hence, it is better to smoke the strain during weekends or early in the evening for a night of relaxation.

Skunk 47 makes its presence known through a pungent aroma that fills the room once its amber container is opened. Its scent is similar to freshly picked berries, sweet with undertones of wet soil. Crushed and combusted, overtones of skunk become apparent.

Drawn in, Skunk 47 tastes like a basket of fresh tropical fruits. Blending with the delicious flavors of mangoes, berries, and oranges is a spicy skunk that, on the exhale, leaves a lingering earthy aftertaste.

It is not uncommon to see users feeling a little dehydrated while using marijuana. Its symptoms usually appear in the form of a cottonmouth but red eyes are a possibility as well. This is because cannabinoids interfere with the production of moisture in both areas. To some degree, it may also cause dizziness. All are mild though and are not at all a cause for concern. Still, it is best to stay hydrated by drinking a few glasses of water before, during, and after the session.

Aside from the performance of their recreation strains, World of Seeds prides itself in the amount of scientific study each of their products undergo before being introduced to the market. Thus, it comes as no surprise that Skunk 47 is of therapeutic value to the vast community of patients turning to medicinal marijuana for relief.

One of Skunk 47’s best uses is an analgesic. Through the painkilling properties of its psychoactive compounds, it relieves a variety of aches and pains throughout the body including those caused by cramps and stomachaches.

At the same time, it prevents nausea by effectively stabilizing an upset gastrointestinal tract. The latter condition is common among cancer patients undergoing the aftereffects of chemotherapy. In time, the pronounced body high lulls users to a deep, unencumbered sleep while simultaneously increasing its quality.

Skunk 47 has an amalgam of behavioral benefits with the most notable being its effects against stress. Its happy high boosts moods and reduces high levels of emotional strain. In doing so, it appeases also symptoms of anxiety, depression, and other mental health conditions like PTSD.

Skunk 47 is an excellent choice for users aspiring to grow their own marijuana for the first time. The nearly pure Indica is short, sturdy with has a high resistance to various problems including weather fluctuations, strong gusts of wind, and high levels of moisture that cause molds. Still, there are many commercial growers that prefer cultivating their batch indoors in spite of the strain’s great outdoor performance.

Apart from adding extra protection against pests, artificial environments give growers full control over important factors like humidity, temperature, and lighting. Together, the three bring out the plant’s fullest potential based in its current phase.

Applying growing techniques like Sea of Green will increase yields and even shorten the flowering periods. Meanwhile, a hydroponic system diminishes the need for pesticides and other similar chemicals. However, soil will bring out its full flavor. The Indica-dominant strain’s bushy structure necessitates constant pruning though as it can interfere with the circulation of light and air. Moreover, cutting away the dead parts of the plant ensures nutrients travel to healthier budding sites.

Many online and local dispensaries carry Skunk 47 seeds in feminized form. There is also an autoflowering version developed by Advanced Seeds to increase its ease of grow.

Skunk 47 typically takes between 7 to 9 weeks to fully bloom. Once mature, it produces around 14 to 18 ounces of buds per square meter. Under the expert care of a seasoned grower, the plant has the potential to flower faster and yields higher.

Like other plants, Skunk 47 enjoy absorbing nutrients from the sun. In an organic environment, it yields an average of 14 to 21 ounces of buds per plant after blossoming from the last week of September to the second or third week of October.

Have you ever smoked or grown your own Skunk 47? Please let me know what you think about this marijuana strain in the comments below.