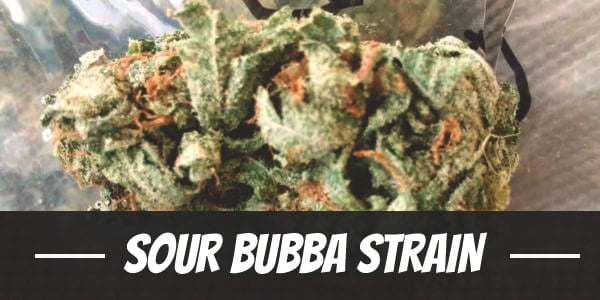 Sour Bubba is a strain that temporarily melts the stress away. It delivers a gentle rush of euphoria that uplifts spirits and enhances moods before it later develops into a soothing sensation that coats the body in relaxation. And, with its 15% THC, it provides patients with therapeutic reprieve against a variety of symptoms.

This wonderful bud is the result of crossing NYC Diesel and Bubba Kush. The former has potent cerebral effects that enliven the senses. Meanwhile, the latter has an interesting blend of flavors and a powerful body high. Although different, both combine to create a well-balanced hybrid that induces a subtle mental stimulation before tapering into a heavy-hitting buzz that plants itself in the limbs.

Recreational and medicinal users are not the only ones who benefit from Sour Bubba. The Bank Genetics have made the strain available in feminized form for home growers. It requires some knowledge in gardening, especially when cultivating it in a garden or farm. But, indoors, breeders have more leverage. Regardless, yields are high, and harvest is usually near when its sweet skunk profile turns more bold.

A rush of euphoria swarms the mind at the onset. It replaces worries, doubts, and self-depreciating thoughts with cheerful memories. Faces glow as one’s innate sense of happiness translates into a bright, wide smile.

The upbeat disposition pairs perfectly well with the upcoming bodily effects. Usually, it takes about an hour or two for the soothing buzz to creep in. But, once it does, users instantly feel it take over. It coats the body in tranquility, releasing tension from the muscles like a wave of relaxation.

Users may take advantage of the calm mind and body high to let out any stress accumulated throughout the day or the week; either by rolling around the bed playing games, enjoying a lighthearted comedy on Netflix, or meditating in bed. Although, the likelihood of one falling into a deep, unencumbered slumber is high – especially when taking a few extra puffs of Sour Bubba’s restorative smoke.

With that said, Sour Bubba is not a strain that users should use during a workday. It leaves one slow to react as the heaviness settles in the limbs.

Sour Bubba has a pungent aroma characterized by overtones of herbs and spices. Countering it is the smell of diesel and its sour undertones that intensifies after breaking apart the buds. Combusting it, on the other hand, reveals a sweeter scent.

Sour Bubba has a harsh smoke that induces coughing in some users. It later disperses into the palate as a blend of herbal spices with a hint of sweetness. On the exhale, it leaves a tangy note and a diesel aftertaste.

Sour Bubba’s moisture-inhibiting cannabinoids always dry the eyes and the mouth of users. The side effects are mild, but users may down a few glasses of water to ease the discomfort. Avoiding caffeinated and alcoholic drinks will also keep it from exacerbating.

Sour Bubba has a restorative high that clears the mind, calms the nerves, and washes away worries. It effectively manages stress levels, replacing the overwhelming dread with an inner peace that lasts for hours. Similarly, long-sufferers of depression, anxiety, and PTSD may also turn to the strain for comfort against the onslaught of hopelessness and panic attacks.

Its tranquilizing buzz eases aches and pains in the body that arise as a result of either disorder, disease, or inflammation. For the latter, it has anti-inflammatory properties that appease redness and reduce swelling. It prevents unnecessary and unwanted contractions, especially in the muscles around the gastrointestinal tract. Its soothing qualities keep users from regurgitating or vomiting food. And, as such, it makes for a great companion for cancer patients battling the nauseating effects of chemotherapy.

In higher doses, the deep relaxation develops into a sedating buzz that makes the eyelids droop before the heavy-hitting high settles in the limbs. It lulls users to bed, enhancing the quantity and quality of sleep.

Sour Bubba is a tall plant especially when it is cultivated outdoors, in a garden or farm. It has long internodal space that stretches further apart as it enters the flowering period. This is true indoors too.

Keeping it short is necessary as it can interfere with growing factors like light, air, and humidity inside the growing room. In this regard, growers may prune away parts of the plant such as burnt top and dead branches or leaves. Topping it early so it stays up to a manageable height is also helpful.

Another way to manage Sour Bubba’s height is through the Screen of Green method. It requires installing a screen on top of the current canopy then weaving the branches into the net. In this way, it creates an even top for plants to stay short. This setup also allows budding sites to absorb similar amounts of light for bud production.

Growers may also opt to place Sour Bubba in a Sea of Green setup, which takes advantage of its foliage by planting at least four plants in a single square meter. The method encourages coaxing a single, semi-dense cola so it produces huge yields.

It takes between 10 to 12 weeks for Sour Bubba to flower. At harvest, growers can expect between 12 to 14 ounces of buds per square meter.

Flowers bloom between the early days of October to the second or third week of the same month. It yields at least 12 ounces of buds per plant once ready for harvest.

Have you ever smoked or grown your own Sour Bubba? Please let me know what you think about this marijuana strain in the comments below.