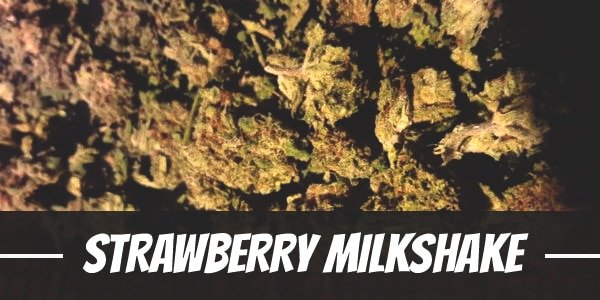 Strawberry Milkshake brings all the boys and girls to the yard. It entices the senses with its fruity strawberry-flavored terpene profile as well as stimulating head to toe high. Eventually, as its hybrid effects continue to persist, it settles in the limbs as a soothing buzz kneads the muscles that deeply relaxes the body.

It gets its delicious palate from the elusive Strawberry Soda, a mouthwatering strain that invigorates users at just the first whiff. Enhancing its medicinal effects is the Indica-leaning White Fire Alien OG. It has a citric lemon aroma with a tinge of tanginess. Its high is mainly stress-crushing but it can also be fully recreational.

Its onset starts within minutes after ingesting the first two or three puffs of its thick smoke. It introduces itself as a tingling sensation that spreads throughout the head, smoothing one’s forehead crease as it uplifts the mood. It leaves users feeling happy. It brings a smile to one’s face as it brings back cheerful memories and an upbeat disposition.

After about an hour or two, the initial cerebral buzz turns into a soothing pressure that ebbs down all the way to the toes. It kneads the muscles, releasing tension and relaxing the body. Feeling like a well-oiled machine, users may use the renewed energy to complete tasks. Although, one may also choose to lounge around the couch.

For a lot of users, the freedom from mental and physical inhibition can be an arousing experience. It arouses the carnal senses and ignites an innate passion for worldly pleasures. Using it with a loved one is highly recommended, especially because its aphrodisiac qualities ensure a good time. Moreover, both lovers will in flop to the bed deep in relaxation until asleep.

Strawberry Milkshake, as its name suggest, tastes much like the fruit itself. Although it has sweet milky undertones, overpowering its profile is the tangy smell of crushed strawberries and berries. Breaking apart the buds produces the sour aroma of gas.

Tantalizing the palate is Strawberry Milkshake’s fruity blend of strawberries and berries. Its smoke has a sweet but thick quality to it due to its milky undertone. However, it is quickly replaced by the taste of sour gas which leaves a sharp aftertaste on the exhale.

The eyes seemingly dry after a session of smoking Strawberry Milkshake. This is not uncommon. After all, the bud does contain moisture-inhibiting cannabinoids. Along with it is a cottonmouth as the production of saliva gradually slows down. Users usually ignore the long-lasting effects due to its mildness. A better cause for concern is the mild headache that comes with overconsumption which one can easily avoid by staying within one’s tolerance limit.

Stress becomes a problem when it is chronically in high levels. It can lead to the early onset or exacerbation of several health issues, including depression, PTSD, anxiety, and high blood pressure. Through its happy high and its terpenes, Strawberry Milkshake reduces the overwhelming dread caused by work or school problems.

In doing so, it also helps manage mental health issues. It temporarily pushes back looming hopelessness in place of cheerful memories and renewed motivation. Because of this, it makes for an impressive anti-depressant.

Its uplifting effects also have a stimulating effect on the appetite. It encourages users to eat heartily and, as such, is a source of comfort to patients with cachexia or eating disorders like anorexia. At the same time, it soothes the stomach so food travels smoothly. In a similar manner, its ability to prevent muscles from contracting is essential for reducing pains and aches all over the body.

One of Strawberry Milkshake’s best assets is its ability to lull users to rest. It has sedating properties that not only hasten bedtime but also enhance the quality and quantity of sleep. In this way, users not only feel lighter the next day but also invigorated.

Strawberry Milkshake exhibits both Indica and Sativa qualities. It is relatively tall and sturdy. Its branches are equally thick, and, because of this, it can easily carry the weight of its heavy buds. This also improves plant health in that it allows the plant to withstand various growing conditions such as strong winds and cool temperatures. Because of this, growers can cultivate the strain in both indoor and outdoor growing conditions.

It works best with both the Sea of Green and Screen of Green setups. For the former, growers must cultivate at least four strains in a single square meter and will hasten the flowering period. Pruning is essential for this method since its foliage will overlap. If left unattended, it will result in reduced air circulation in the lower nodes. Meanwhile, the latter requires installing a screen a few inches above the current canopy. It not only keeps the plant short, but also maximizes light distribution through an even canopy. Aspiring breeders must weave the branches into the net as it grows. Regardless of which method one chooses, both will increase yields.

TIP: Buy seeds like Strawberry Milkshake at my seed bank

Strawberry Milkshake has an indoor flowering period of 8 to 10 weeks. Harvest comes fast and, once fully mature, growers can expect at least 12 to 14 ounces of buds per square meter.

In the northern hemisphere, Strawberry Milkshake blossoms from the second week of October up to the last few days of the same month. It produces at least 12 ounces of buds per plant at harvest.

Have you ever smoked or grown your own Strawberry Milkshake? Please let me know what you think about this marijuana strain in the comments below.