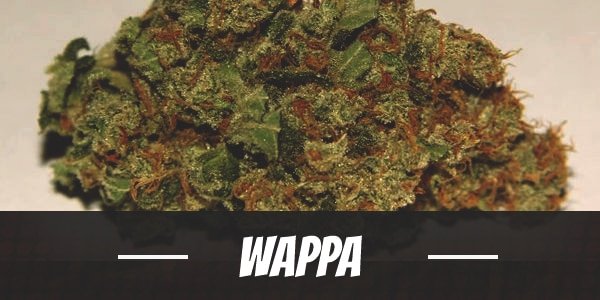 According to the urban definition of Wappa, she is a lovable, smart, beautiful, and sophisticated girl who hides in the trees awaiting her prey. Choosing to be elusive, not a lot of people has seen her. In some ways, the same can be said of the strain. At first glance, it appears to be no different from the other Indica-dominant hybrids. However, its real beauty lies in its ability to induce body relaxation without the typical sedation that may cause some people to feel lethargic.

On where it came from, no one except the breeder Paradise Seeds knows. Apparently, they have chosen to keep this information private. Some people think that it may have descended from a Skunk and an unknown strain.

It is not until one uses Wappa before a full understanding of how different it is from the others become clear. It contains as much as 19% THC. While it is not an out-of-this-world amount, it remains very potent. For most people including experienced users, a quick look at its characteristics leads to one logical assumption – that it can put people on a couch-lock even as it delivers a sedating body high.

It is such a pity if one were to dismiss it on that merit for its effects is truly unique. At its onset, it brings on an uplifting high to the mind and the body. Often, users feel a sense of happiness setting in and cause one to be sociable and very talkative. Even alone, some users may also find themselves giggling.

Meanwhile, once the physical effects kick into the body, it brings on a soothing calm. The experience itself is unique in that it is quite intense and gentle both at the same time. If it were most others, then it would have already put users in a couch-lock. If not, then many are likely to feel lethargic. Wappa, on the other hand, lets users continue to function and stay productive. However, for those who choose to sit still and chill, they often allow their minds and thoughts wander.

For all the intense and yet subtle Indica effects of Wappa, it would be a shame if her fragrance is underwhelming or let alone repulsive. Fortunately, Paradise Seeds has done an excellent job in developing this hybrid as such that it comes with a pleasant fruity aroma of lemon and lime with a sweet note.

Users of Wappa must be pleased to note that much of its fragrance carries over to its taste with a hint of pine.

Wappa may be gentle with its physical high, but she can be a bit tough when it comes to adverse effects. Like others, it causes people to have dry mouth and eyes. In some instances, some people may also feel dizzy or have a mild headache. No surprises here, though, as these are all accepted reactions to the use of cannabis.

One thing to keep in mind is that it may cause people to feel paranoid. No, it is not at the level where it makes people act insanely, but it is a feeling that is pronounced. For this reason, those who are predisposed or more susceptible may want to use only a tiny amount of find another strain to try.

The best use of Wappa when it comes to medical applications is a stress reliever. It does so by uplifting and enhancing the mood of users. As it induces a calming and relaxing high, even people suffering from depression, PTSD, and other similar conditions may find comfort with its use.

By all accounts, Wappa comes with pain-relieving qualities. Granted that it is anecdotal, it is an open secret that relief from pains and aches caused by chronic illnesses is something that the use of cannabis can do.

During the comedown, most people feel relaxed by then. As such, it becomes conducive to sleeping.

Seeds are available from the breeder and elsewhere on the Internet. One has to be careful though and exercise due diligence to avoid purchasing from dubious vendors.

At any rate, growers have a choice of cultivating the plant indoors or outdoors. It is a medium size plant that is stout and sturdy.

Like typical Indica plants, Wappa as a rather quick flowering period between 8 to 9 weeks. During harvest, growers can expect a yield of as much as 16 ounces per square meter.

The plant is likely to thrive best when cultivated in an area where the climate is similar to the Mediterranean. It is not expected even to reach six feet tall. The flowering period normally falls on the first week of October with each plant producing up to 18 ounces of buds.

Have you ever smoked or grown your own Wappa? Please let me know what you think about this marijuana strain in the comments below.